The group stage of the 2018 FIFA World Cup is done, which means it’s time to get down to serious business. The Round of 16 will be the first knockout stage at the tournament, which will begin on Saturday with a heavyweight clash featuring two of the pre-tournament favourites as Argentina and France lock horns in Kazan.

France progressed to the Last 16 stage by clinching top spot in Group C, although the World Cup contenders have hardly looked the part thus far. The same was epitomised by a drab stalemate against Denmark in their final group game – the only goalless draw in the tournament thus far – as both sides limped towards securing the top two positions.

If France have been unconvincing, Argentina have been nothing but shambolic, with many considering them lucky to have even reached the Round of 16. La Albiceleste only managed to amass one point in their first two games, before a frantic finish in their final Group D game saw them beat Nigeria 2-1 courtesy a late Marcos Rojo goal to finish second behind Croatia.

The two sides have previously faced each other 11 times, Argentina holding a major advantage over France in the head-to-head record. (W6 D3 L2). Ahead of their latest meeting on Saturday, The Hard Tackle takes a closer look at the Round of 16 encounter.

France may have been winners of Group C, but there is hardly any sense of optimism that comes along with the position. Les Bleus have grossly underperformed thus far, with just three goals in three games a big indicator of the same. Chances have not flowed in consistently and there has been a lack of cohesion in the final third.

Therefore, heading into the Round of 16 clash against Argentina, Didier Deschamps could decide to shake things up ever so slightly, with Nabil Fekir likely to be the player to benefit from it after impressive cameos in the games thus far. The manager is also likely to stick with the 4-2-3-1 formation instead of his preferred 4-3-3, with Olivier Giroud the central striker.

Joining Fekir and Giroud in the attacking unit, should be Kylian Mbappe and France talisman Antoine Griezmann, who is in a serious need to raise his game ahead of Saturday’s encounter. Behind the quartet, N’Golo Kante will once again be holding the fort in the middle of the park, with Paul Pogba getting the freedom to roam freely and run the game.

Pogba’s improving form, coupled with Kante’s domineering performances were two of the few positives for France in the group stage, and the duo will be pivotal once again against Argentina. In the back four, Benjamin Pavard looks primed to return and join Raphael Varane and Lucas Hernandez.

But, there are doubts over the availability of Samuel Umtiti, who has been struggling with a knee injury, although he could be fit enough to start. Meanwhile, Hugo Lloris should return in goal for France, armband in tow, looking to lead Les Bleus to a big Round of 16 win over Argentina.

Argentina somehow snuck into the Round of 16, despite not looking entirely convincing in their final group stage game against Nigeria. But, after sealing their place in the knockout stages very late into their game, Jorge Sampaoli’s men might just have received the kind of push they needed to kick-start their FIFA World Cup 2018 campaign.

La Albiceleste do not have any major injury concerns either, with Enzo Perez likely to shake off a thigh niggle to be available against France. The River Plate midfielder has hardly looked the part for Argentina thus far, but he remains one of Sampaoli’s trusted generals in midfield, and his availability will be a big boost.

The 32-year-old is likely to be joined in the middle of the park by Argentina’s old workhorse Javier Mascherano and Ever Banega, who made the biggest of differences against Nigeria. Behind the trio, the backline is likely to remain unchanged, although they pose an uncomfortably porous look, which France can quite easily penetrate, potentially.

The biggest selection headaches for Sampaoli though, will be upfront. Lionel Messi is untouchable, but the players around him haven’t done much to warrant a start in their biggest game so far. Gonzalo Higuain could get the nod ahead of Sergio Aguero, despite not exactly being impressive.

The final spot remains the major bone of contention. For some reason, the likes of Cristian Pavon and Paulo Dybala are not enjoying their manager’s confidence, meaning it’s a showdown between Angel Di Maria and Maximiliano Meza, with the former likely to start once again. Meanwhile, Franco Armani should continue ahead of the disastrous Willy Caballero too. 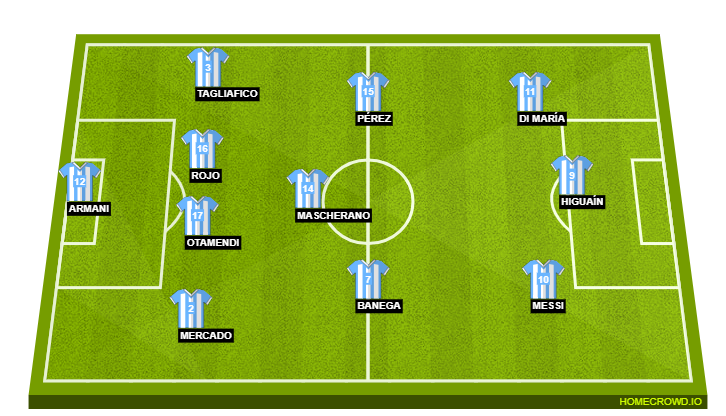 To say that France’s attacking output has been below-par is nothing short of a gross understatement. One player who has embodied the struggled better than anyone else is Antoine Griezmann. Supposed to be the talisman for Les Bleus, Griezmann has struggled to set the stage alight with his performances, with talks about his club future also proving to be a distraction.

However, the Atletico Madrid man will hope to emulate his own form from Euro 2016, wherein he had finished as the top scorer. Griezmann only got into his stride properly in the Round of 16 before leading his nation’s charge in Euro 2016, albeit faltering in the final. Should the same Griezmann turn up on Saturday, France could just be on their way to a big win over Argentina.

Saturday’s fixture pits two of the biggest heavyweights in world football against each other, but these are sides that aren’t exactly carrying the best of forms into the Round of 16. Yet, the knockout stages tend to bring out the game changing element in such outfits, and we could see the same happen in the first game of this phase.

That being said, Argetina’s porous defensive line is a major cause for concern for Jorge Sampaoli, something France will look to take advantage. In the end, the gulf in defensive class should make all the difference, which is why The Hard Tackle is going with a 2-1 win for France.