Panama and Tunisia will have nothing but pride to play for when they meet at the Mordovia Arena in their final Group G game on Thursday.

The final day of the 2018 FIFA World Cup group stage will see the final fixtures in Group G and H being played out. At the Mordovia Arena in Saransk, Panama and Tunicia will face off in a dead rubber, with their only aim being avoiding the wooden spoon in Group G.

For Panama, it has been a baptism by fire in their maiden World Cup campaign, having lost by three and five goals, respectively in their first two games. But, while the 6-1 scoreline against England was humbling, it also produced a historic moment as Los Canaleros scored their first-ever goal at the World Cup.

Tunisia, on the other hand, have had a tough old time as well on their return to the big stage, although the scorelines didn’t flatter them as much. Their first loss was only by the odd goal at the hands of England, and while Belgium did put five past them, there were still a few positives to be taken from the defeat.

The two sides will face off against each other for the very first time before they depart Russia, and ahead of their first meeting on Thursday, The Hard Tackle takes a closer look at the Group G encounter.

They may have been beaten comprehensively thus far, but Hernan Dario Gomez’s men have played with a smile on their faces. (Photo courtesy – Alex Livesey/Getty Images)

Panama have unsurprisingly struggled to look the part on their World Cup debut. While the defence has failed to contain the better opposition attacks that they have come up against thus far, their front men have struggled to create enough chances in the final third.

But, after scoring their first-ever goal at the World Cup, Los Canaleros will now be looking to somehow record their first point at the big stage. In order to do so, Hernan Dario Gomez should make a number of changes on Thursday, some forced and some tactical.

Gomez’s hand has been forced as far Michael Murillo and Armando Cooper are concerned, with the duo set to serve one-match bans after going into the referees’ books in each of their first two games. Murillo’s place is likely to be taken up by veteran right-back Adolfo Machado, who looks set to feature for the 77th time for Panama.

In midfield, Cooper should be replaced by Ricardo Avila, with Gabriel Gomez and Anibal Godoy giving him company in the middle of the park. In the wide midfield places, Jose Luis Rodriguez should retain his place, while Abdiel Arroyo is pushing for a start to replace Edgar Barcenas. But, Luis Tejada could get his elusive start, with Blas Perez making way.

The other big change should be made at the heart of the Panama defence, with Felipe Baloy starting his first World Cup game, taking up Fidel Escobar’s place in the lineup. Meanwhile, there have been concerns over Jaime Penedo’s fitness as well, but the veteran goalkeeper should be fit enough to start what could be his final World Cup game.

Tunisia have progressively moved forward in the tournament thus far even as they have been beset with several injury problems ever since their first outings against England. Mouez Hassen was the casualty in that game, with a shoulder injury ruling him out for up to five months.

Farouk Ben Mustapha has ably replaced the 23-year-old thus far, and should start once again in goal for the North Africans. But, there are other problems in the defensive unit for the Eagles of Carthage, with their centre-back pairing of the opening game, Dylan Bronn (ankle) and Syam Ben Youssef (knee) facing a few weeks on the sidelines.

Ben Youssef should be replace by Yohan Benalouane at the heart of the Tunisia defence, with Yassine Meriah set to be his partner. Bronn’s place at right-back is likely to be taken by Hamdi Nagguez, who has iterated the need to end the North African side’s 40-year wait to win another World Cup match.

Meanwhile, Ellyes Skhiri is expected to retain his place as the holding midfielder ahead of Mohamed Amine Ben Amor. The 23-year-old should have Ferjani Sassi and Saif-Eddine Khaoui as his partners in the midfield trio, with the latter taking up more advanced positions on the pitch.

Wahbi Khazri should lead the line once again for Tunisia, looking to add to his tally after netting his side’s second goal against Belgium. Flanking the Sunderland man, will be Fakhreddine Ben Youssef and Naim Sliti, who is expected to replace Anice Badri on the left side of attack. 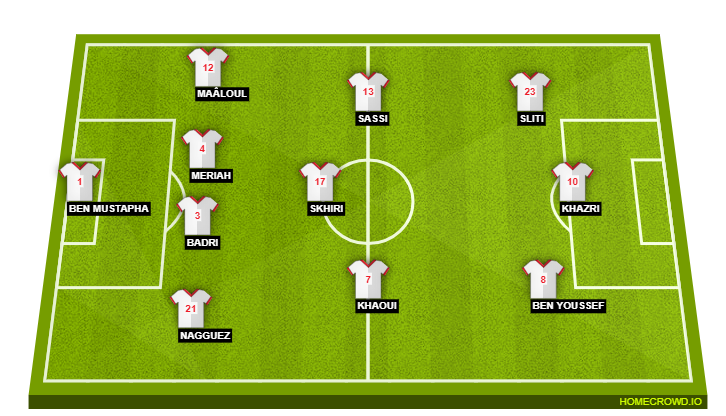 Baloy made history last weekend when he scored Panama’s first-ever World Cup goal. That goal brought about a frenzied celebration, with Los Canaleros seemingly not caring about the result. On Thursday, Baloy will have more responsibility on his seasoned shoulders, as Panama look to notch up their first win at the World Cup.

In order to do so, he will have to shore up what has been a leaky defence so far, with Roman Torres by his side. And of course, the 37-year-old will always be a threat whenever Panama go into set-piece situations, as he showed against England.

The final round of group stage fixtures started with a dead rubber as Saudi Arabia and Egypt met on Monday. It will end with another on Thursday, when Panama and Tunisia lock horns, with both sides having big objectives ahead of the tie. While Panama will be aiming to register their first ever point(s) at the World Cup, Tunisia are desperate to end a 40-year wait to win at the big stage again.

The game should thus, be quite an open affair, with plenty of chances being created as the two sides go hammer and tongs to get all three points. Since the competition was expanded to a 32-team affair, none of the dead rubbers featuring already-eliminated sides have ended in a draw, and the pattern shouldn’t halt on Thursday, with Tunisia just edging out Panama to grab third place in Group G.