The third and final round of group stage fixtures will continue on Tuesday, with final games in Group C and Group D. One of these games will pit perhaps, two of the unluckiest teams in the competitions so far as Australia and Peru meet at the Fisht Olympic Stadium in Sochi, with the former still in with a chance of reaching the Round of 16.

The Socceroos may have just one point from their first two games, but a win could still see them sneak into the Round of 16. Bert van Marwijk’s men have shown tremendous character and fighting spirit in their outings thus far, coming back from a goal down to level the scores in each of the matches, although they did end up losing the first one to France.

Peru, on the other hand, have been one of the most enterprising sides in the 2018 FIFA World Cup so far but still have nothing to show for their efforts. Successive 1-0 defeats have seen them bow out in the group stage itself despite giving both Denmark and France a run for their money. But, there is certainly something to build upon for La Blanquirroja as they depart from Russia.

The two sides have never faced each other previously, and ahead of their first ever meeting on Tuesday, The Hard Tackle takes a closer look at the Group C encounter.

Australia are in with a great chance to qualify for the Round of 16. (Photo courtesy – Dean Mouhtaropoulos/Getty Images)

The Socceroos have been quite impressive in their two games so far, with their pragmatic approach to games. Having appointed Bert van Marwijk on a short-term contract that ends after the World Cup, there were very little expectations if any from Australia ahead of the competition.

But, the manager has forged together a tight-knit side that leaves very little space to be exploited in defence. With a compact defensive block operating in a disciplined manner, teams are forced out wide to create chances via crosses, which Trent Sainsbury & co. have very little problems defending.

Up ahead in midfield, Mile Jedinak keeps things organised around himself while looking to dictate the tempo of the game. But, the star performer for Australia is undoubtedly Aaron Mooy, who is the chief orchestrator when van Marwijk’s men are in possession, with Tom Rogic another player whose playmaking abilities are set to come to the fore.

But, the big problem for Australia at the 2018 FIFA World Cup so far has been getting goals from open play, with neither Andrew Nabbout nor Tomi Juric managing to pose a major threat thus far. While Nabbout should still be given the nod by van Marwijk, Tim Cahill could be a major option if things aren’t going to plan for the Socceroos.

Out wide, Mathew Leckie and Robbie Kruse will be handy outlets once again, with Daniel Arzani likely to make his presence felt from the bench.

Peru have been one of the most eye catching sides in the tournament thus far, which only makes it all the more unbelievable that they were one of the first sides to be eliminated from the tournament. Creativity hasn’t been a problem at all for La Blanquirroja while they have more than held their own at the back.

If not for lax conversion, we could very well be writing about Ricardo Gareca’s men possible bidding to qualify for the Round of 16 as well. But, there have certainly been several positives for Peru to take back home despite packing off early.

As they prepare for their final bow at the 2018 FIFA World Cup, Paolo Guerrero & co. will be desperate to bow out on a high and notch up one win before they depart. The onus will, thus, be on the captain himself to get on the end of the chances created, with the likes of Andre Carrillo and Christian Cueva forming the supply line.

In midfield, the performances of Yoshimar Yotun and Pedro Aquino will be key, with the duo in charge of stifling the Aussie attack. Alberto Rodriguez and Christian Ramos will also be key in order to continue giving Andrew Nabbout a hard time in front of goal. 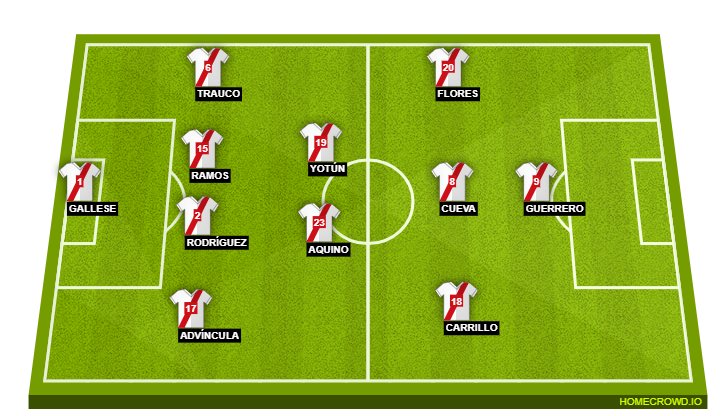 That Australia are still in with a chance to reach the Round of 16 is largely down to their captain Mile Jedinak. The Aston Villa midfielder has not just kept things organised in the middle of the park, but has also scored each of the goals that the Socceroos have scored in the competition so far.

No Australian has ever scored more in a single edition for Australia, but more than the record in sight, he will need to marshall his troops and focus on the bigger prize in sight for the entire side, something he has proven previously as well, when the Socceroos had clinched a place in the finals.

With a place in the Round of 16 still up for grabs, Australia are likely to adopt a more forward thinking approach on Tuesday while not swaying too far away from being defensively solid first. Peru, on the other hand, have their best chance yet to break their scoring duck, even though the Aussie defence will be hard to get by.

With Australia chasing glory, there should certainly be goals in this game, with the possibility of win going down the wire for either side. But, as Australia have proven time and again, their best may be brought out in a moment of desperation, possibly leading them to qualification to the knockout stages, depending on what happens in the other Group C game on Tuesday.

Update: Nabbout has a dislocated shoulder and will not be taking any part in the game. The author apologises for the error in the lineup.