Monday will kick off the final round of group stage fixtures as the Round of 16 qualifiers and the knocked out sides continue to be sifted apart. But, at the Volgograd Arena, Saudi Arabia and Egypt will meet in a match without any stakes, playing for nothing but pride as they look to avoid being the bottom feeders in Group A.

Saudi Arabia were much improved in their game against Uruguay, conceding fewer chances as they cut a more resolute unit at the back. But, defeat didn’t escape the Green Falcons as La Celeste ran out 1-0 winners at Rostov Arena earlier this week. Juan Antonio Pizzi’s men will now enter their final game bottom on the standings, with the worst goal difference at this World Cup.

Egypt, on the other hand, were more disappointing in their defeat to Russia than against Uruguay in their opening game, with their famed defensive solidity nowhere to be seen. The Pharaohs are thus, still looking to register their first points at FIFA World Cup 2018 as they meet Saudi Arabia.

The two sides have previously faced each other six times, with Egypt edging out the head to head battle 4-1, with one game ending in a draw. Ahead of their latest meeting on Monday, The Hard Tackle takes a closer look at the Group A encounter.

The losses in their first two games have been hard to take already. But, there was heartbreak in store for Taisir Al-Jassim, who sustained a thigh injury in the loss to Uruguay that might have effectively ended his World Cup campaign a game in advance.

Juan Antonio Pizzi will thus, be forced to make at least one change on Monday, with Yahya Al-Shehri likely to be the one to replace Al-Jassim, although Salman Al-Faraj could be the one to drop down to midfield. Mohamed Kanno could also get a chance to impress after a solid outing off the bench against Uruguay.

At the back, Pizzi might change his personnel between the sticks once again. Mohammed Al-Owais did concede only one goal against Uruguay, but was at fault for it as Luis Suarez got an open goal to aim at. Thus, Yasser Al-Mosailem could become the third goalkeeper to line up for Saudi Arabia at the 2018 FIFA World Cup. 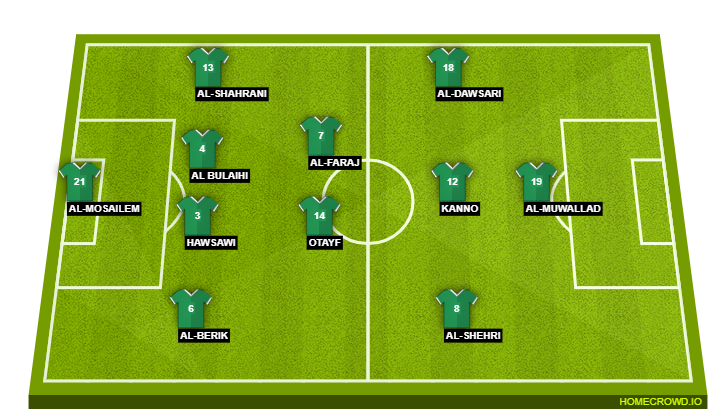 Unlike Saudi Arabia, Egypt were not beset with any injuries in their 3-1 loss to Russia earlier this week. But, there have been concerning reports suggesting that Mohamed Salah has fallen out with team officials, although the player himself has squashed those rumours, terming them to be shocking.

Salah should, thus, start Egypt’s final game in what should be a largely unchanged outfield lineup named by Hector Cuper, with Kahraba possibly coming in for Marwan Mohsen. The other likely change for Monday could be right at the back, with Essam El-Hadary finally getting his long-awaited World Cup bow.

While Mohamed El-Shenawy has been one of the standouts for Egypt in the two games so far, El-Hadary could be given the chance to become the oldest player ever at the World Cup and get one up over Saudi Arabia, where he plays his club football.

On the other end of the pitch though, the onus will be on Trezeguet and Abdallah Said to support Salah well, with the Liverpool superstar often cutting a frustrated figure against Russia.

With Taisir Al-Jassim out injured, and unlikely to feature, and Mohammad Al-Sahlawi not bringing his scoring boots to Russia, Fahad Al-Muwallad looks like the only player capable enough of breaking the duck for Saudi Arabia at the 2018 FIFA World Cup. With the player set to lead the line again for the Green Falcons, it’ll be up to him to lift the dropping heads before the side bows out.

Monday’s tie at the Volgograd Arena pits a couple of teams that have arguably been two of the most unimpressive sides at FIFA World Cup 2018. But, the prospect of going back home without anything to show for their efforts might just end up bringing the fight out of both Saudi Arabia and Egypt.

Juan Antonio Pizzi’s men did show a lot of character to restrict Uruguay to just one goal last time out while getting closer to scoring the elusive goal. With the Egyptian defence faltering in their previous game, the Green Falcons do have a chance, but it should end in a draw in the end as both sides end their disappointing campaigns.