Day Eleven of the 2018 FIFA World Cup will see the second round of group stage fixtures nearing its completion. At the Nizhny Novgorod Stadium, England will be in with the chance to perhaps, make an early booking into the Round of 16, when they face off against Panama, who are staring at a group stage ouster just two games in.

The Three Lions were promising and frustrating in equal measure earlier this week when they played Tunisia, but they managed to hold their nerve to record a 2-1 win and three points in the process. If they manage to continue their perfect record on Sunday, a possible top-of-the-standings clash against Belgium could beckon in their final group game.

Panama, on the other hand, were commendable in their first-ever World Cup game as they managed to hold off a talented Belgium side for a long time. But, the floodgates opened – something Los Canaleros will have to be wary of on Sunday – once Dries Mertens opened the scoring as the Red Devils coasted to a 3-0 win.

Sunday will be the first time that England and Panama face off against each other and ahead of their maiden meeting, The Hard Tackle takes a closer look at the Group G encounter.

England showed a lot of fight and character in their win over Tunisia. (Photo courtesy – Matthias Hangst/Getty Images)

It was a game of two halves for England against Tunisia as they created plenty of chances in the first half, but failed to convert most of them. The likes of Raheem Sterling, Jesse Lingard and John Stones were all guilty of spurning the opportunities that came their way.

In the second half though, the Three Lions were sluggish and had to dig deep into their reserves to get the winner. One of the few players who looked bright in the final 45 minutes of the game was Ruben Loftus-Cheek, who is likely to get the nod for the starting lineup on Sunday after a sprightly cameo.

The Chelsea academy graduate should take up Dele Alli’s place, who has been struggling with a thigh injury all week and is only likely to make the bench on Sunday. Other than Alli, the only possible change could be upfront, with Raheem Sterling’s place supposedly under threat after Marcus Rashford’s impressive cameo.

But, Southgate could end up sticking with a player who has done so well for him during his stint as the England boss, leaving Rashford with a place on the bench once again. The rest of the side should remain unchanged, with Ashley Young continuing as the left wing-back after an impressive performance against Tunisia and Kyle Walker retaining his place in the back-three.

John Stones and Harry Maguire were commendable at the back as well, while Jordan Henderson will keep his place ahead of Eric Dier, if only just.

Panama seemed to be enjoying the occasion more than anything and to their credit, their heads didn’t fall even after conceding three goals by the time the game ended. What was starkly evident though, is how alarmingly their fitness levels dropped as the match progressed.

Thus, it won’t be a surprise if Hernan Dario Gomez makes a few changes, not just to freshen things up and give some of his other players a run, but also with one eye on the fitness levels of his players. Blas Perez might be the first one to drop down to the bench, with fellow Panamanian joint-top scorer Luis Tejada taking his place.

The other possible change(s) could be in midfield, with Ismael Diaz replacing Jose Rodriguez on the left flank. The rest of the side might just remain unchanged, with the onus on Sunday likely to be on Roman Torres once again to rally his men together and frustrate England as much as they can.

At the back, the experienced Jaime Penedo should again be a busy man and will need to be on his guard at all times to perhaps, delay the inevitable as much as possible, with Gareth Southgate’s men the resounding favourites. 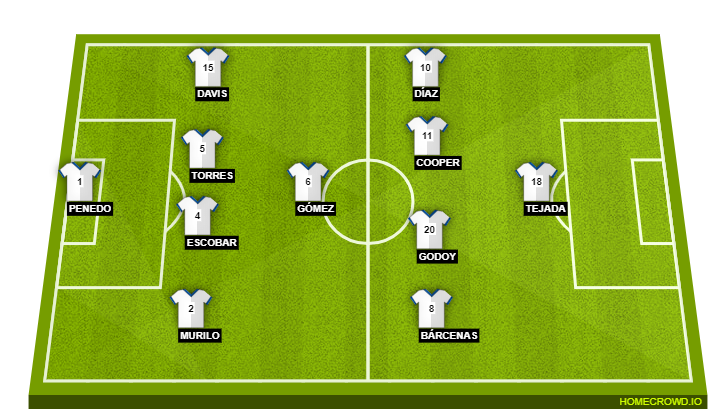 As England looked to be limping towards a disappointing 1-1 draw against Tunisia, they needed a dose of inspiration to get past the spirited Eagles of Carthage. That inspiration came in the form of Ruben Loftus-Cheek, whose pace and directness was a handful for the Tunisian defence.

Additionally, it was Loftus-Cheek who won the corner that led to Harry Kane’s winner on the night, and with Dele Alli unlikely to feature on Sunday, the Chelsea academy graduate is primed for his first World Cup start. Having initially been a surprise name in Gareth Southgate’s final 23-man squad, Loftus-Cheek now has a golden opportunity to leave his mark at the World Cup.

England showed so many positive signs for Gareth Southgate to build on going forward in the tournament. Most importantly, they don’t seem to possess a fragile mentality that has bogged down previous teams, while also being multi-dimensional in attack, although they will be hoping for better luck from VAR this time around.

They should get plenty of chances against Panama as well, but unless they address their lax finishing, it could end up being another frustrating day for the Three Lions. In the end though, England should have more than enough to get past Panama without getting out of third gear. We predict a 2-0 win.