Mexico will look to build on their win over Germany when they meet South Korea at Rostov Arena in their second Group F game on Saturday.

Day Ten of the 2018 FIFA World Cup will see the second round group stage fixture. The third match in Group F will see Mexico aiming to continue their charge towards a place in the Round of 16 when they meet South Korea, who will be aiming to get their first points on the board.

The Taegeuk Warriors kicked off their campaign with a disappointing 1-0 loss to Sweden wherein they showed very little quality on either end of the pitch bar goalkeeper Cho Hyun-woo. Son Heung-min & co. must now pull their weight, lest South Korea bow out of the group stage after just two games.

Mexico, on the other hand, produced the biggest shocker of the tournament so far as they handed a 1-0 defeat to defending champions Germany in their opening game to put themselves in a promising spot for the rest of the group stage campaign. El Tri will approach the game against South Korea knowing well enough that a win will put them on the brink of qualifying for the Round of 16.

The last meeting between Mexico and South Korea at the World Cup was in France 1998, when the Central Americans enjoyed a convincing 3-1 win in the group stage. Ahead of their latest meeting on Saturday, The Hard Tackle takes a closer look at the Group F encounter.

The defeat to Sweden last weekend was hard enough to take as it is, but it also came at a cost, with left-back Park Joo-ho sustaining a hamstring injury that has sent him back home early. The player picked up the injury in a freak incident as he landed awkwardly while trying to control a misplaced pass.

Park’s place in the starting lineup should be taken up by Kim Min-woo, who was ironically the major reason for South Korea’s loss in their opening game as he conceded the penalty that led to the only goal of the game. Apart from the incident though, Kim was a solid customer and should, thus, get the nod on Saturday.

The change at left-back shouldn’t be the only one, with Kim Shin-wook also likely to get the boot after an underwhelming performance against Sweden. The burly striker was nullified rather easily by Andreas Granqvist and Pontus Jansson, ominous signs ahead of the test against Hugo Ayala and Hector Moreno.

In his stead, talented winger Lee Seung-woo might get the nod to start on the left flank after a sprightly cameo against Sweden. As a result, the side’s talisman, Son Heung-min should slot in the strike partnership, where he’ll play off Hwang Hee-chan. 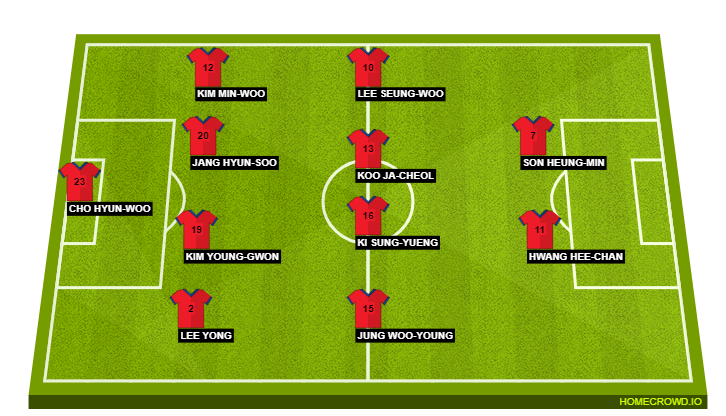 A stunning performance against Germany in their opening game means it is quite unlikely that Juan Carlos Osorio will tinker with a winning combination. The change in style for the opening game, was a surprise in itself as the Mexico boss had deviated from his preferred 4-3-3 formation.

However, Carlos Vela was a revelation while donning the central creator role in the hole, with Miguel Layun’s pace being hard to combat for Marvin Plattenhardt. On the opposite flank, pocket dynamo Hirving Lozano was true to the popular pre-tournament prophecy, as he carried the biggest threat for El Tri.

In midfield, the experienced duo of Hector Herrera and Andres Guardado used all their experience to good effect and will look to stifle Son Heung-min on Saturday. The backline of Carlos Salcedo, Hugo Ayala, Hector Moreno and Jesus Gallardo was impressive as well, keeping thing tight with a narrow defensive block.

Meanwhile, Guillermo Ochoa will look to continue his astounding World Cup form, having made nine saves against Germany last week. Osorio has handy options on his bench for each position, promising signs for the rest of the tournament.

That his outfield players cumulatively failed as a unit was disappointing enough for Shin Tae-yong, but his talisman Son Heung-min’s underwhelming performance, in particular, would have been rather frustrating. The Tottenham attacker was neutralised to great effect last weekend, and he will need to raise his performance if the Taegeuk Warriors are to register their first points at the World Cup.

The two sides find themselves on the opposite ends of the spectrum as far as Group F is concerned. While Mexico are eyeing an early qualification to the Round of 16, South Korea are staring down the barrel, with a group stage exit looming for the Taegeuk Warriors.

Their performance in the final third against a solid Swedish defence provided ominous signs ahead of the game against Mexico, who boast a formidable backline themselves. If El Tri can be more clinical in and around South Korean box, then it could be a long day for Shin Tae-yong & co. The Hard Tackle goes with exactly that, with Mexico coasting to a 2-0 win.