Day Eight of the 2018 FIFA World Cup will see the second round of group stage fixtures continue. The fourth game in Group C will see France lock horns with Peru at the Ekaterinburg Arena on Thursday, with the group favourites placed well in their bid to reach the knockout stages quickly.

France started their World Cup campaign on a positive note, although they were made to work hard for the three points. In the end though, a late Aziz Behich own goal – initially chalked down as a goal to Paul Pogba – did the trick as Les Bleus took their place atop the Group C standings.

On the other hand, there was heartbreak in store for Peru, who fought tooth and nail with Denmark upon their return to the World Cup after a 36-year gap. However, Christian Cueva’s penalty miss was followed by Yussuf Poulsen’s strike which turned out to be the only goal in the match as La Blanquirrojo were narrowly defeated in their opening game.

The two sides have faced each other just once previously, back in 1982, with Peru running out 1-0 winners thanks to a late Juan Carlos Oblitas goal. Ahead of their latest meeting on Thursday, The Hard Tackle takes a closer look at the Group C encounter.

The winner against Australia may have been taken away from him, but Pogba is set to play a key role for France once again. (Photo courtesy – Laurence Griffiths/Getty Images)

They may have taken all three points from their game against Australia last Saturday, but France were anything but convincing in the game. For large parts of the game, Les Bleus lacked the cutting edge in the final third, with their game largely one dimensional

That Corentin Tolisso was unimpressive should only make Didier Deschamps’ job easier, as he looks to sort out his strongest possible side going forward. If Tolisso is indeed relegated to the bench, Olivier Giroud could be the man to take his spot, with Antoine Griezmann playing off the Chelsea striker.

Giroud’s presence will give Ousmane Dembele an outlet for his probing crosses, although the Barcelona winger must improve himself. Alternatively, Deschamps could also go for a straight swap for Tolisso by naming Blaise Matuidi in the starting lineup, but Giroud looks more likely to get the nod on Thursday.

The rest of the side should remain unchanged, with France looking upon Kylian Mbappe and Paul Pogba to improve as well, while N’Golo Kante will shoulder more defensive burden if Tolisso is dropped to the bench.

In contrast to France, Peru showed some promising signs despite losing their game, although their finishing abilities came under the scanner. The biggest howler was Christian Cueva’s horrendous penalty miss that forced the player to break down after the full-time whistle.

With captain Paolo Guerrero now likely to return against France, Cueva’s place is under threat, although Andre Carillo might be the player to drop down to the bench. Veteran forward Jefferson Farfan will, thus, likely to start on the right flank, with Guerrero spearheading the attack

The rest of the lineup should remain unchanged, with onus on the midfield duo of Yoshimar Yotun and Renato Tapia to kill off space in the middle of the park and take some pressure off the defensive line. Meanwhile, Luis Advincula and Miguel Trauco will be key in the attacking scheme of things, with the full-backs bombing forward at every given opportunity.

At the back, Pedro Gallese will be a busy man between the sticks and will have to be on his guard in order to thwart and frustrate France on the day. 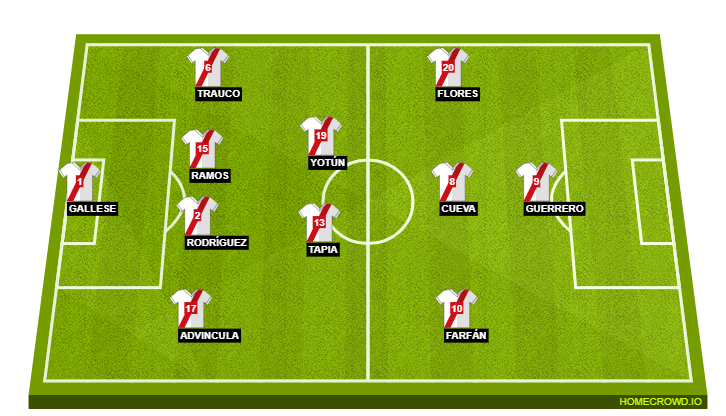 After all the hysteria and excitement of returning to the World Cup, it all came crashing down for Ricardo Gareca and his Peru side as they failed to record a win despite playing quite well. One of the many positives from the game though, was the form that Paolo Guerrero showed after coming off the bench.

That outing would have done wonders to his match sharpness and well, and La Blanquirrojo will be waiting wit bated breaths for the return of their talismanic captain. A confidence booster to boot, Peru might just do something special on Thursday, even if it looks like a stretch right now.

Despite all of their quality in attack, France failed to light up the stage as much as expected in their World Cup opener. Granted, Australia were sitting back and allowing them very little space, but when the chance did present themselves, the players failed to make them count.

Peru though, are unlikely to be sitting back against Les Bleus, which should give them more sniffs at goal on Thursday. However, La Blanquirrojo will also take the attack to France, which should make for an enticing encounter. However, in the end, Didier Deschamps’ men should have enough quality to make it two wins in two.