Russia will be looking to take a big step towards clinching a place in the Round of 16 when they meet Egypt at the Krestovsky Stadium on Tuesday.

Day Six of the 2018 FIFA World Cup will see the start of the second round of group stage fixtures, with the hosts once again kicking things off. And, Russia will be looking to build on their spectacular start to their World Cup campaign when they face off against Egypt at the Krestovsky Stadium on Tuesday.

Russia began their World Cup campaign in stellar fashion as they trounced Saudi Arabia 5-0 on the opening day of the tournament to place themselves well in the race for a Round of 16 spot. The Sbornaya are firmly perched atop the Group A standings, thanks to their +5 goal difference, which will come in handy by the time the group stage is done.

Egypt, on the other hand, were left licking their wounds after already missing out on the services of Mohamed Salah as they were beaten by a late Jose Maria Gimenez goal last Friday. The Pharaohs now face an uphill battle to book their place in the Round of 16, with a win on Tuesday being vital.

This will be the first ever time when Russia and Egypt will be going against one another, and ahead of their maiden meeting, The Hard Tackle takes a closer look at the encounter.

The win on the opening day came at a bitter cost for Russia, as even though Alan Dzagoev’s substitution was offset by a brilliant performance by Denis Cheryshev, the hosts could possibly be missing out on the experience of the CSKA Moscow midfielder for the rest of the tournament.

With Dzagoev set to miss out on the game against Egypt, Cheryshev should feature right from the off this time. But, Dzagoev’s absence also comes with a silver lining as it helps Aleksandr Golovin play in his favoured role in the hole, with the freedom to pull the strings from a more central position.

With Cheryshev on the left, Russia will have a direct and pacy outlet, who will always be an option for Golovin, with Aleksandr Samedov a more wily customer on the right flank. The only other possible change could be upfront, with Stanislav Cherchesov grappling with the problem of continuing with Fyodor Smolov or handing Artem Dzyuba a start.

While Dzyuba did net one of the goals last Thursday, Smolov was a constantly dangerous outlet at the head of the Russian attack, meaning Cherchesov is likely to stick with the Krasnodar striker for now. The rest of the side should remain the same, with the Miranchuk twins and Daler Kuzyaev being handy options on the bench.

The loss to Uruguay was a bitter pill to swallow for Egypt for a couple of reasons. Firstly, the absence of talisman Mohamed Salah had already made their jobs a lot more difficult than it usually would have, and to make matters worse, they conceded the winner in the dying moments of the match when the point was firmly in their sight.

But, there is some good news ahead of their second game, with Salah reportedly fit and ready to return to action for good, after Hector Cuper’s words in the lead-up to the Uruguay game only ended up being mind games that didn’t really work.

The Liverpool superstar’s return will not just make them a whole lot more threatening in front of goal, having not registered a single shot on target last Friday, but also provide a timely confidence boost to the side. Salah should replace Amr Warda on the right side of the Egypt attack, with Trezeguet and Abdallah Al-Said for company in attack.

At the back, Mohamed El-Shenawy was the most impressive player for the Pharaohs, standing bravely between the goal and the Uruguay attack for almost the entirety of the match. His exploits mean Essam El-Hadary’s World Cup dream will likely remain unfulfilled. Apart from Salah’s return, the rest of the Egyptian side should remain unchanged. 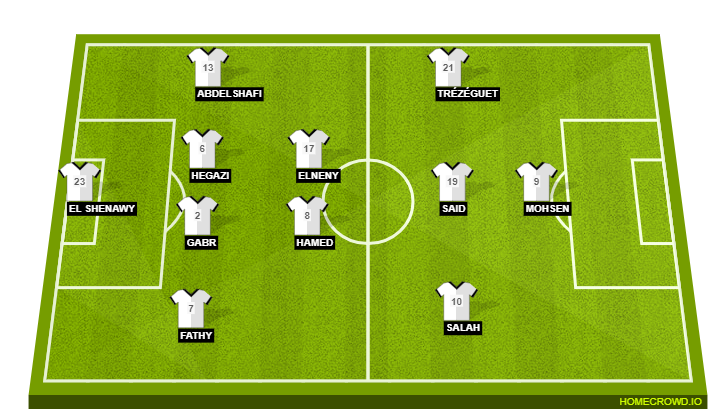 Time to get off the bench and make a mark. (Photo courtesy – Clive Rose/Getty Images)

Egypt’s over-reliance on Mohamed Salah became all too apparent against Uruguay, as they lacked the cutting edge in the final third and didn’t have a single shot on target. With their World Cup hopes hanging by a threat, it is almost certain that Salah will start, which should provide a boost to the side, while the player himself should make a major difference on the pitch.

Just five days into the World Cup, and we might just already have our first elimination. Egypt absolutely have to win in order to remain in contention for a place in the Round of 16, otherwise they might be ousted in the first round itself if Uruguay beat Saudi Arabia, should they go on to lose on Tuesday.

Russia, on the other hand, are carrying all the momentum and confidence into the game with Aleksandr Golovin set to run the show once again in attack. This time around, they will not have such an easy sight on goal, with a stubborn Egypt defence difficult to get past. But, they are certainly the favourites, with a draw likely if Salah starts.