Day Five of the 2018 FIFA World Cup will see the first round of group stage matches continue. The second Group F game in which Sweden and South Korea kick off their respective campaigns, when they face off against each other at the Nizhny Novgorod Stadium on Monday afternoon.

Sweden have done quite a creditable job since the retirement of Zlatan Ibrahimovic in the aftermath of their UEFA Euro 2016 group stage ouster. What has particularly been impressive about them is the fact that Janne Andersson has forged a strong unit. If that’s not enough, the fact that they reached the World Cup at the expense of stalwarts like Netherlands and Italy only makes it more commendable.

South Korea, on the other hand, have been going through an extended turbulent period during which they have performed well below expectations. Their downward spiral has been so staggering that the Asian outfit will be the third lowest ranked nation at the World Cup, with their qualifying campaign being unimpressive as well.

The most recent clash between Sweden and South Korea was way back in 2005, with the match ending in a 2-2 draw. Ahead of their latest meeting on Monday, The Hard Tackle takes a closer look at the Group F encounter.

Janne Andersson has overseen a fantastic turnaround in Sweden’s fortunes since replacing Eric Hamren in 2016. The 55-year-old has put the focus on being a defensively resolute side first while being direct and quick on the other end of the pitch.

The onus, thus, is on captain Andreas Granqvist to marshall his troops and organise the defensive line. The veteran defender will be partnered by Victor Lindelof at the heart of the Swedish defence, with the duo of Mikael Lustig and Ludwig Augustinsson being the full-backs who will bombard forward at every given opportunity.

In midfield, veteran schemer Sebastian Larsson is still going strong, and will be one of the playmakers in the side, while also posing a threat with his abilities on the dead ball. Albin Ekdal will be the anchor man in midfield, shoring up the defensive side of things.

The talisman for Sweden though, will be Emil Forsberg – the creative hub of the team who will be responsible for the majority of chances created on the day. The RB Leipzig man will be setting up the likes of Ola Toivonen and Jimmy Durmaz, with Marcus Berg the biggest threat inside the box for the side.

Shin Tae-yong hasn’t been in the job for a long time, having only taken over from Uli Stielike a year ago. Therefore, it’s not really surprising that the manager has used a number of different formations during his rein, although the 4-4-2 looks likely to used on Monday.

Kim Seung-gyu should be the South Korea No. 1, and will need to use all his experience in order to guide his side to the next round. Ahead of him, the back four should comprise of Lee Yong at right-back and Hong Chul at left-back with Jung Seung-hyun and Kim Young-gwon the central defensive pairing.

Captain Ki Sung-yueng will hold the fort in the middle of the park while also looking to advance at times to create overload in the final third. Alongside him, Jung Woo-young will complete the midfield pivot that will look to keep things tight and stifle the Swedish creative flow.

The key man for South Korea will undoubtedly be Son Heung-min, who is coming off the back of a fine season with Tottenham. The player is likely to line up on the right flank, with former Barcelona prodigy Lee Seung-woo being deployed on the opposite wing. Upfront, Hwang Hee-chan and Kim Shin-wook form a dynamic strike partnership. 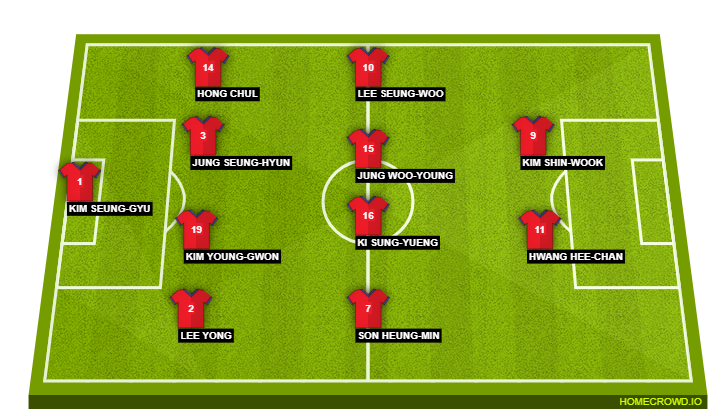 Part of a South Korean side that fails to inspire a lot of confidence, a lot of the responsibility will fall on the shoulders of Son Heung-min. Having enjoyed the best season of his career in 2017-18, it is clear that the Tottenham man is riding high on confidence. He will need to use all of his top-level experience to ensure a crucial win for his side.

Two teams that are carrying very little form leading up to the World Cup. But, as we saw in the opening game of the tournament, it can either go horribly wrong for such a side or emphatically well. Considering the way the two sides will be set up though, it is unlikely to be a goal glut when Sweden and South Korea face off on Monday.

In fact, it should be a closely contested affair, with Sweden’s defensive solidity giving them the edge in the game. In the end, Janne Andersson’s men should have more in their kitty to get all three points, winning by the odd goal in the end.