Defending champions Germany will begin their World Cup campaign when they meet Mexico at the Luzhniki Stadium in Moscow on Sunday.

Day Four of the 2018 FIFA World Cup will bring more anticipated action as teams continue kicking off their respective campaigns. The Group F fixtures begin on Sunday, with Germany starting the defence of their World Cup crown against Mexico at the Luzhniki Stadium in the Russian capital.

Germany had eased through the qualification phase without any opposition whatsoever, winning each of their ten games in a record-breaking campaign. But, they haven’t been in the best of forms in 2018, managing to win just one of their four friendlies this year – an unconvincing 2-1 win over Saudi Arabia – while losing to Brazil and Austria.

Mexico’s World Cup qualifying campaign was similarly impressive as they coasted through the Hex group in the CONCACAF qualifiers. And just like Germany, El Tri have been extremely inconsistent in the build-up to the tournament, having won just two of their last five friendlies.

The two sides have previously met 13 times, with Germany winning the most recent outing as they beat Mexico 4-1 at last year’s Confederations Cup semi-final. Ahead of their latest meeting on Sunday, The Hard Tackle takes a closer look at the Group F encounter.

The biggest concern for Germany in the lead-up to the tournament had been the fitness of not one, but two key players. Manuel Neuer and Jerome Boateng were fighting a race against time to be fit for the World Cup, with the former recovering from a serious, long-term foot injury.

The duo though, have since proven their fitness and are set to play a key role in Joachim Low’s side over the next few weeks. Neuer also has the added responsibility of being the team’s captain, and will be aiming to marshall his troops from the back.

Joining Boateng at the heart of the Germany defence, will be Mats Hummels, with the duo’s partnership being one of the strong points for Die Mannschaft due to their understanding and ability to build up play from the back. The full-backs are likely to be Jonas Hector and Joshua Kimmich, who will both be factors with their deliveries in the final third.

In midfield, Low has an embarrassment of riches, but is likely to go ahead with his trusted pairing of Sami Khedira and Toni Kroos, with the latter being a deep lying playmaker and the former a ball winner.

The attacking lineup is more or less well settled as well, with Timo Werner the striker, Thomas Muller starting on the right flank and Mesut Ozil the playmaker who will operate in the hole. There are plenty of options for the slot on the left flank, but Marco Reus looks the likeliest to get the nod and make his long-awaited World Cup debut.

Germany and Mexico share a lot of similarities heading into the World Cup, one of which is the fact that Juan Carlos Osorio has a well settled squad at his disposal. The familiarity starts right at the back, with Guillermo Ochoa set to be the No. 1 once again, looking to create a similar sort of an impact as in the 2014 edition.

Jesus Gallardo and Miguel Layun should be the full-backs on the left and right sides, respectively, with the duo’s ability to bomb up and down their flanks being a major enabler in the final third for the wingers. At the heart of the Mexico defence, Hector Moreno and Hugo Ayala form a formidable partnership, with veteran defender Rafael Marquez likely to be on the bench.

Midfield will be Mexico’s biggest strength, with Hector Herrera a strong holding midfielder who is supported ably by Andres Guardado. The third slot in the midfield is up for grabs, with Jonathan dos Santos likely to be given the nod ahead of the more attack-minded Marco Fabian.

In attack, Osorio has the healthy problem of plenty on his hands, with the likes of Hirving Lozano, Carlos Vela, Giovani dos Santos and Oribe Peralta all being handy options for the wide areas. Likewise, Javier Hernandez and Raul Jimenez are two strong contenders for the striker’s slot.

But, Osorio should go ahead with the spark of Lozano and the experienced Vela on Sunday, with Chicharito likely to get the nod to be the focal point of attack, with the other three players being fine options off the bench. 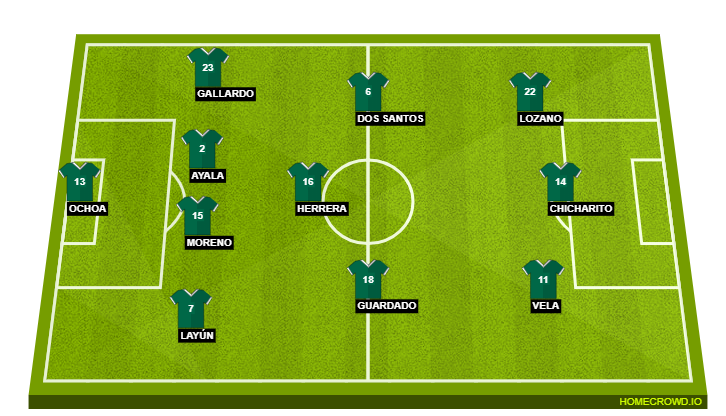 He set the Eredivisie alight with his blistering runs at PSV this past season and now, the time has come for Hirving Lozano to rise to the occasion. While several would pass off the 22-year-old as just a speed merchant, there’s more to his game than just that, with his ability to link-up in the final third often underrated.

Expect the youngster to make a splash, not just on Sunday but all through the finals.

Two sides that have high hopes at the 2018 FIFA World Cup, but haven’t carried the best of forms into the tournament. Germany were fantastic all through the qualifiers but have slipped somewhat since the turn of the year. But, one can never bet against such a well settled, well oiled unit.

There is a lot of excitement surrounding the Mexico National Side ahead of the World Cup, with many believing that they could finally reach the elusive “fifth game” this time. But, El Tri are in for some disappointment as they kick off the tournament, with Joachim Low’s men likely to prevail in the opener.