Argentina and Iceland will look to begin their World Cup campaigns on a strong note, when they meet at the Spartak Stadium in Moscow on Saturday.

Day Three will see the group stage of the 2018 FIFA World Cup continue as teams from Groups C and D play their first games of the tournament. The major hitters of Group D, Argentina will begin their campaign at the Spartak Stadium in Moscow, where they will meet Iceland.

La Albiceleste qualified for the World Cup by the skin of their teeth as they needed a win from their final CONMEBOL qualifier. They did so in style as Lionel Messi scored a timely hat-trick to lead the South Americans to their first win over Ecuador in Ecuador in over a decade. But, Argentina will have to pick up their performance level if they are to emulate or better their result from 2014.

Iceland, on the other hand, have continued going from strength to strength since their groundbreaking UEFA Euro 2016 campaign in 2016. Post that tournament, the Europeans have continued in a similar vein of form, clinching qualification to the World Cup for the first time and becoming the smallest nation to participate in the tournament in the process.

Sampaoli and Messi will be hoping Argentina have put their sketchy qualifying form behind them. (Photo courtesy – Gabriel Rossi/Getty Images)

The two sides have never faced off against each other previously and ahead of their first ever meeting, The Hard Tackle takes a closer look at the Group D encounter.

Argentina’s preparations for the World Cup have not been ideal by any means. Two of their pre-tournament friendlies were cancelled, meaning the players only got match practice in a 4-0 win over Haiti, which followed the 6-1 drubbing at the hands of Spain in March.

Sampaoli has experimented with a number of formations since taking charge of the side, but is likely to stick with the 4-2-3-1 for the World Cup opener, with the system yielding more consistent results. With Sergio Romero sidelined for the tournament, Willy Caballero could be the first-choice for Argentina.

Ahead of him, the back four is well settled, with Gabriel Mercado and Nicolas Tagliafico the full-backs, and Nicolas Otamendi and Federico Fazio the centre-backs. Tagliafico, in particular, will be a player to keep an eye on, with his ability to affect play in the final third as well.

The midfield pivot should see the pairing of Lucas Biglia and Javier Mascherano aiming to add steel in the middle of the park with their defensive acumen. Angel Di Maria is likely to line up on the left flank, and will be aiming to reproduce his heroics from the 2014 edition.

The right flank though, is a bone of contention, although Cristian Pavon is likely to get the nod. If picked, the Boca Juniors man will provide some much needed flair in attack, which is likely to be spearheaded by Sergio Aguero. But, the star of the side is undoubtedly Lionel Messi, who will be the talisman for La Albiceleste on Saturday.

The potential giant killers for the second successive major international tournament, Iceland will be aiming to use their incredible team work to string together a bunch of unexpected results once again. But, form has deserted them in the lead up to the World Cup, and the expectations are understandably low.

Despite the poor pre-tournament results though, Heimir Hallgrimsson is likely to stick with his trusted 4-4-2 formation, looking to keep things simple. Veteran goalkeeper Hannes Halldorsson should line up between the sticks, and should be a busy man on Saturday, with an in-form Messi up against him.

Hordur Magnusson and Birkir Saevarsson should guard the left and right flanks, respectively, with both the full-backs also likely to bomb forward regularly. At the heart of the Iceland defence, the experienced duo of Karl Arnason and Ragnar Sigurdsson are the likely centre-back partnership, who will be ably supported by the midfield ahead of them.

The midfield quartet should remain compact when off the ball so as to kill off space in the middle of the park. On it, the wide midfielders, most likely being Johann Berg Gudmundsson and Albert Gudmundsson, will drift inwards while in possession, with Gylfi Sigurdsson taking up more advanced positions ahead of them.

The central midfield partnership is likely to comprise of Birkir Bjarnason and captain Aron Gunnarsson, with the duo keeping things tight in the middle of the park while relaying the ball quickly. Alfred Finnbogason will be the sole striker, who will need to be clinical for Iceland to stand a chance on Saturday. 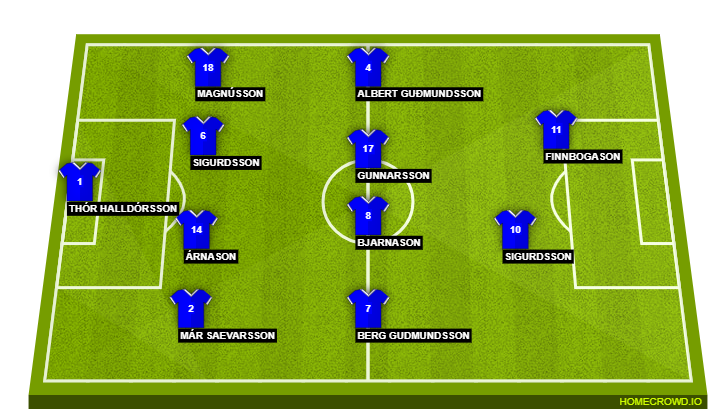 Sampaoli has injected some fresh blood into his squad for Russia, with one of the young guns likely to be eyed by plenty of scouts. That player is Cristian Pavon, who has been attracting interest from European clubs, and will be an eye-catching talent with his ability to link up play well, as well as a startling burst of pace. A budding partnership with Messi might just see him get closer to Barcelona.

Argentina might have been slightly lucky to have clinched automatic qualification for the World Cup, but they seem to be much more well placed than Iceland to start the tournament on a winning note. Results and form have betrayed the Nordic side in 2018, and their usual defensive solidity has been nowhere to be seen.

With Lionel Messi in menacing form, Iceland’s introduction to the World Cup could be a cruel one. Heimir Hallgrimsson & co. might be better advised to adopt a damage limitation policy and concentrate on their final two games. But, the Icelandic spirit should see them give a tough fight before they finally cave in.