Day 2 of the 2018 FIFA World Cup will see the group stage action continue. First up on Friday, will see Matchday 1 of Group A culminate, when Egypt and Uruguay face off against each other at the Krestovsky Stadium in Saint Petersburg.

There was drama in store as Egypt returned to the World Cup after a gap of 24 years, with the curse of closely missed qualifications finally lifted. With the clock ticking down towards full-time, the Pharaohs clinched their place in the group stage when Mohamed Salah scored from the spot to earn his team a 2-1 win over DR Congo.

Uruguay, on the other hand, were a part of the crazy CONMEBOL qualifiers that saw even the second spot remain up for grabs till the final day. La Celeste ended up grabbing that spot, finishing ahead of Colombia and Argentina to secure their place in the World Cup for the third successive edition.

The two sides last met well over a decade ago, with Uruguay running out 2-0 winners over Egypt in a 2006 friendly. Ahead of their opening group stage fixture, The Hard Tackle takes a closer look at the Group A encounter.

There are doubts over the availability of Mohamed Salah. (Photo courtesy – Khaled Desouki/AFP/Getty Images)

Egypt’s qualification to the World Cup ended years of underachievement as a stirring return to the big stage was completed at the business end of African qualifiers. But, there are ominous signs that the joyride just might end at the very first stage of the competition.

To begin with, the Pharaohs have been rocked by the injury to Mohamed Salah, who is a major doubt for the opening game against Uruguay. To add to their woes, Egypt have struggled to look the part in the Liverpool superstar’s absence, having scored just one goal in their last four games.

With Salah not a certain starter for Friday, we might see Trezeguet starting on the right flank in his stead, with the Egypt talisman starting on the bench. On the opposite flank, Ramadan Sobhi should be deployed, with Abdallah El-Said starting in the hole. Egypt’s real strength though, will lie in midfield and defence.

In the middle of the park, Mohamed Elneny and Tarek Hamed will form a defensive pivot, looking to stifle the Uruguay attack before relaying the ball forward. The backline, which should comprise of Ali Gabr, Ahmed Hegazi, Ahmed Fathy and Mohamed Abdel Shafy, will remain compact to deny Luis Suarez and Edinson Cavani any space in between the lines.

Meanwhile, Essam El Hadary looks set to become the oldest player to feature in the World Cup, at 45. While the veteran goalkeeper will be vital on Friday, the responsibility of initiating counter-attacks may rest on the shoulders of Sobhi, should Salah not start. 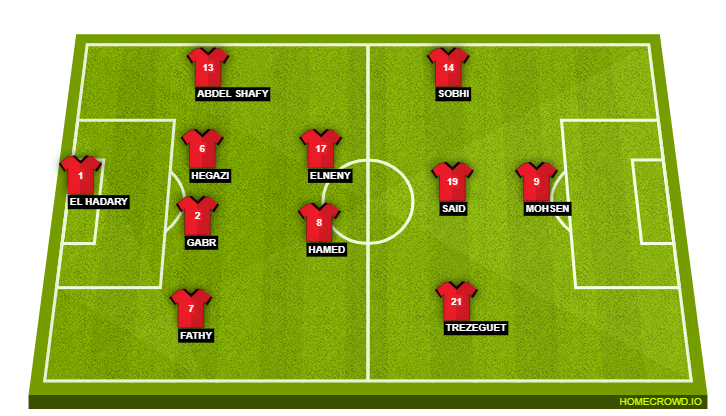 In contrast to the fortunes of the Egyptians, Uruguay have a much more stable footing heading into the World Cup. Manager Oscar Tabarez has all of his first-choice players fit and available, and his men are rightly the favourites to go through to the Round of 16.

El Maestro should set his side up in his typical 4-4-2 formation, with defensive solidity being the team’s strength. The key components in the backline are Diego Godin and Jose Maria Gimenez, who form a strong central defensive partnership, with Maxi Pereira and Gaston Silva flanking the duo.

Up ahead in midfield, Rodrigo Bentancur and Matias Vecino will sit in the middle of the park, looking to break up the opposition play. Bentancur, meanwhile, will also don the creative hat, looking to find the attackers in pockets of spaces while also carrying the ball forward himself.

Cristian Rodriguez will likely provide a pacy outlet on the left flank, while Giorgian de Arrascaeta should be on the opposite wing, looking to drift inwards and set the strikers up. The front-men will undoubtedly be the star attraction for La Celeste, with Luis Suarez and Edinson Cavani forming a potent strike partnership.

While the spotlight will be on Luis Suarez and Edinson Cavani, the star strikers will need to be supplied with the right kind of passes to be their dangerous selves. That is where Bentancur comes in, pulling the strings from midfield while not being shy to advance forward and set the attackers up directly either. If in his elements, Uruguay should have a field day.

Egypt have very little momentum heading into their opening tie against Uruguay. Their talisman, Salah, is facing a fight against time to be fit, and the pre-tournament results have not been positive at all. While they should retain their defensive solidity, the Pharaohs are likely to be toothless in attack without their star man.

It should, thus, be a matter of when rather than if as far as Uruguay’s pursuit of taking the lead is concerned, with both Cavani and Suarez in fine form. The Hard Tackle predicts a comfortable afternoon for Oscar Tabarez’s men, winning by two goals in the end.