The 2018 FIFA World Cup will finally kick off when Russia face off against Saudi Arabia in a Group A tie at the Luzhniki Stadium on Thursday.

The wait is finally over, with the much-awaited FIFA World Cup set to be inaugurated in Russia on Thursday. As always, the quadrennial event will kick-off with the hosts playing the first match after the opening ceremony is done and dusted, with the Sbornaya set to host Saudi Arabia to the Luzhniki Stadium.

Russia, as the host nation, qualified for the tournament automatically, but are the lowest ranked team at the competition. Indeed, much has changed since they won the rights to host the World Cup, failing to go past the group stage of any of the competition they have participated since their semi-final bow in Euro 2008, and expectations are understandably low.

Saudi Arabia, on the other hand, are back on the big stage after a gap of 12 years. Their participation in the 2006 edition was the fourth successive time that they had made the finals of the World Cup – and the fourth overall. Their Round of 16 finish in their maiden campaign remains the best finish for the Green Falcons.

The two sides have only met once previously, with Russia running out 4-2 winners in a friendly in 1993. Ahead of the World Cup opener on Thursday, The Hard Tackle takes a closer look at the two sides and the first Group A match.

The hosts come into the match on the back of some very poor form, having failed to win a game since October 2017. Manager Stanislav Cherchesov has an uninspiring record as the Russia boss, with a paltry 26.3 per cent win record during his stint with the national side.

That the coach seemed to be slightly unsure of his best formation only compounds the problems for the Sbornaya. But, he should persist with the 3-4-2-1, after the experiment with a back-four failed miserably when they were beaten by Austria in one of their warm-up fixtures.

The key figure for Russia will undoubtedly be captain and goalkeeper Igor Akinfeev, who will have to put in heroic shifts between the posts to constantly keep his side in the game, especially with the threat of Mohammad Al-Sahlawi looming large. In front of him, CSKA Moscow teammate, Sergei Ignashevic will marshall the back-three, with Vladimir Granat and Ilya Kutepov for company.

The wing-back slots will be manned by veteran duo Yuri Zhirkov and Aleksandr Samedov, with the latter in particular providing a major offensive threat with his delivery and marauding runs. As far as the central midfield slots are concerned, Roman Zobnin will play a major role in keeping things tight in the middle.

Aleksandr Golovin will be pulling the strings from midfield, with seasoned campaigner Alan Dzagoev and Aleksei Miranchuk being the attacking midfielders. Upfront, Fyodor Smolov will lead the Russian attack and will be a potent threat for the hosts.

Unlike Russia, Saudi Arabia have impressed somewhat in the lead-up to the World Cup, having run Italy and Germany close while also beating Algeria and Greece last month. The real concern surrounds the managerial merry-go-round that has engulfed the national side since qualifying for Russia 2018.

Bert van Marwijk was first sacked despite ensuring the Green Falcons’ first qualification since the 2006 edition. His replacement Edgardo Bauza didn’t last long though, and was soon replaced by Juan Antonio Pizzi, who has just had seven months to stamp his identity on the squad at his disposal.

Saudi Arabia have been somewhat solid defensively, with the focus being on creating overloads in midfield with the aim of stifling the opposition attack in the middle of the park. Right at the back though, Abdullah Al-Mayouf might get the nod ahead of the more seasoned Yasser Al Mosailem.

The backline is more or less set, with Yasser Al-Shahrani, Mansoor Al-Harbi, Osama Hawsawi and Omar Hawsawi the first-choice defensive unit. In midfield, Abdullah Otayf and Taisir Al-Jassim will play a dual role, shoring up the defensive side of things while also relaying the ball to the attackers.

In the attacking line, the La Liga-based trio of Yahya Al-Shehri, Salem Al-Dawsari and Fahad Al-Muwallad should line up behind the central striker after allaying fears of poor fitness. The man who will lead the attack is the star of the side Mohammad Al-Sahlawi, who was the joint-top scorer in the qualifiers. 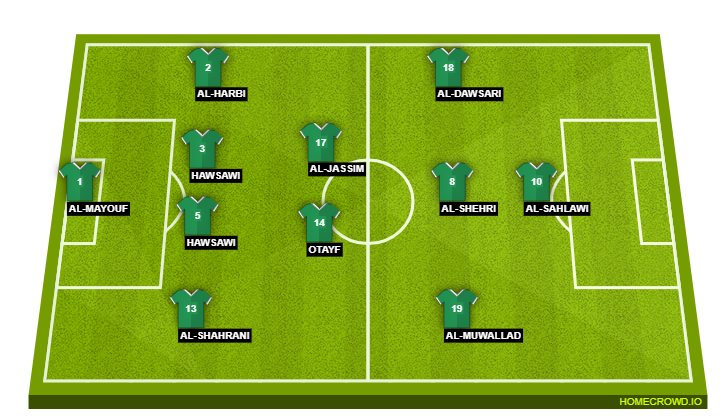 The star man of Saudi Arabia’s World Cup qualifying campaign, Mohammad Al-Sahlawi was the joint-top scorer in all of qualifiers with 16 goals, tied with Robert Lewandowski. But, his recent form has been rather sketchy, something he’d like to correct when the Green Falcons play Russia on Thursday.

The World Cup will finally begin this week, with the two lowest ranked sides in the tournament kicking things off. This may not be a blockbuster affair, but for the home crowd it can’t get any bigger than this as they look to egg on the Sbornaya to a win to start their campaign.

Expect this match to be a tight affair, with chances coming few and far between. But, there should certainly be goals in this game, with a motivated Russia side edging out the visitors by the odd goal, despite the problems that beset them. Keep an eye on Mohammad Al-Sahlawi though.