Real Madrid will look to end their league campaign on a winning note when they visit Estadio de la Ceramica to take on Villarreal on Saturday.

The long, winding La Liga season will finally come to an end this weekend, and with it one side will look to quickly put the disappointing campaign behind it. Real Madrid will hope to conclude their league campaign on a high when they take on Villarreal at Estadio de la Ceramica on Saturday, with second place still in sight.

Villarreal have been in resurgent mood over the last one month, with the 5-1 loss to Barcelona their only winless result in this period. With four wins and a draw in the other five games, the Yellow Submarines are now fifth, and are in the driver’s seat to beat Real Betis to the top Europa League qualification place.

Real Madrid, on the other hand, have continued blowing hot and cold during this one-month period, as they have done all season in La Liga. Their last three games have ended with all three possible results – a draw, a loss and a win – the latest being a 6-0 pummeling of Celta Vigo at Balaidos.

Pablo Fornals had scored the only goal of the game when these two sides last met. (Photo courtesy – Gabriel Bouys/AFP/Getty Images)

The reverse fixture, played at Santiago Bernabeu back in January, saw Villarreal claim a shock 1-0 win, with Pablo Fornals scoring the only goal of the game. Ahead of their latest meeting on Saturday, The Hard Tackle takes a closer look at the encounter.

Javier Calleja has a few injury concerns to deal with ahead of the visit of Real Madrid. The likes of Ruben Semedo, Miguelon, Leonardo Suarez, Ramiro Guerra and captain Bruno Soriano have all played their last game of the season, and will miss out on Saturday.

In Bruno’s absence, Mario Gaspar should continue deputising as the skipper, manning the right side of the Villarreal defence. Victor Ruiz and Alvaro Gonzalez should be the central defensive partnership once again, with Jaume Costa the left-back.

The key man for the hosts will undoubtedly be Sergio Asenjo, who will have to be at his best to set his side on course for another stirring win. Meanwhile, the impressive Rodri should partner Manu Trigueros in midfield, with Pablo Fornals starting in a more advanced role in the hole.

Former Real Madrid forward Denis Cheryshev is likely to be deployed on the left side of attack and will look to make a point, with Samu Castillejo operating on the opposite flank. Top scorer Carlos Bacca, meanwhile, will be aiming to get back among the goals as he looks to make the cut for the Colombian World Cup squad. 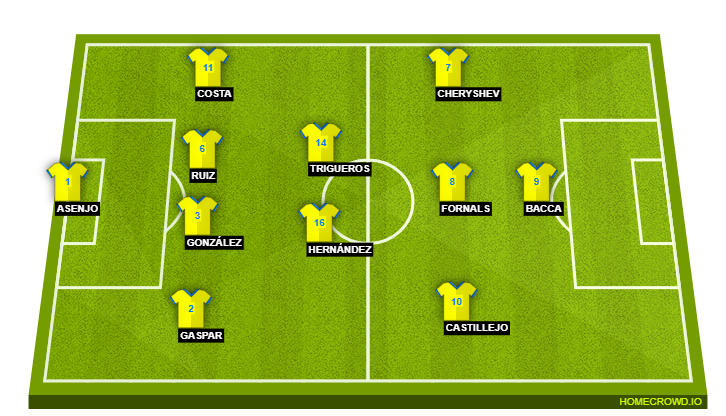 Zinedine Zidane has a clean bill of health ahead of his side’s final league game. Cristiano Ronaldo and Dani Carvajal were the last two players off the treatment table, with the duo returning to training this week, and should see some minutes to regain sharpness ahead of the Champions League final next week.

Meanwhile, the Real Madrid boss is likely to rest a number of key players with one eye on the European Cup final, with the likes of Keylor Navas, Raphael Varane, Marcelo, Toni Kroos, Casemiro and Isco should be rested on the night.

In their stead, Kiko Casilla, Jesus Vallejo, Theo Hernandez and Mateo Kovacic are expected to get rare starts, while the likes of Marco Asensio, Lucas Vazquez and Gareth Bale will have the final opportunity to stake their claim for a place in the starting lineup against Liverpool.

After another injury-riddled campaign, Gareth Bale finds himself on the edge at Real Madrid, with his future hanging in the balance. The last two games could go a long way in defining where the Welshman will ply his trade next season, and he will look to do all that he can to cement his place in Zinedine Zidane’s plans.

Bale has some fond memories against Villarreal, having made his debut for Los Blancos against the Yellow Submarines. Should he continue his hot scoring run, he could well be on his way to securing a place in the starting lineup for the Champions League final and more importantly, in the first-team squad next season.

A tough league campaign will finally come to an end for Real Madrid, and Zinedine Zidane, for one, would be glad to see the back of the La Liga season to shift all his focus on the Champions League final. Villarreal are one of the form teams in the league, and should take the game to the visitors.

Expect the game to be a goal glut, with some of Real Madrid’s fringe players looking to impress Zidane. The Hard Tackle predicts the game to be a score draw, with both sides ending their league campaigns with a point each.