Tottenham Hotspur will be aiming to end the season third on the table when they play hosts to Leicester City at Wembley on Sunday.

As the lengthy Premier League season finally comes to an end, there are a few matches that still carry some high stakes. One such game will see Tottenham Hotspur welcome Leicester City to Wembley, aiming to not slip from third place on the table, while the visitors are aiming to get back to 8th.

Tottenham are in the driver’s seat in the race to finish third, having already confirmed their place in next season’s Champions League group stage. But, their form has wavered of late, with just two wins in their last six games across all competitions.

If Spurs have been sub par, Leicester have been nothing but abysmal. The early season form seems to be back, with the Foxes only overturning a five-game winless run with the midweek win over Arsenal. This run of results has thrown them out of contention for the final European slot and down to ninth spot.

The reverse fixtures, played at the King Power Stadium back in November, saw Leicester hand a shock 2-1 defeat to Tottenham, who could only grab a late consolation goal via Harry Kane. Ahead of their latest encounter, The Hard Tackle takes a closer look at the encounter.

Mauricio Pochettino has a number of roster issues hampering his preparations ahead of the visit of Leicester. On Sunday, the Tottenham boss could be without as many as six first-team players due to injury or illness.

Harry Winks has definitely played his last game of the season as he continues his recovery from an ankle injury. The youngster has company on the treatment table with Eric Dier (illness), Victor Wanyama (thigh), Mousa Dembele (ankle), Serge Aurier (hamstring) and Kieran Trippier (knee) all doubts due to their respective problems.

Aurier and Trippier’s issues mean that there could be a rare start for young Kyle Walker-Peters. Pochettino could make a few more changes in a side that could have a mix of fringe and first-choice players for the final game of the campaign.

As a result, Toby Alderweireld could return to the starting lineup after long last, with Jan Vertonghen for company at the heart of the Tottenham defence. Danny Rose could return as well, completing the back four, with Moussa Sissoko likely to start again in midfield, probably alongside Dier.

Up ahead in attack, Lucas Moura is expected to start, with Son Heung-Min making way for the January recruit. The rest of the attacking lineup should remain unchanged, with Harry Kane still looking to catch Mohamed Salah in the Golden Boot race.

The going hasn’t been easy on the pitch for Leicester in recent weeks, and it’s no better off it, with Claude Puel grappling with several roster issues. On Sunday, the manager could be without as many as eight first-team players due to various issues.

All of these issues have left Puel’s choices down to his bare bones across all areas of the pitch. At the back, Eldin Jakupovic should continue deputising in goal, while Danny Simpson, Wes Morgan, Harry Maguire and Christian Fuchs making up the back four.

In midfield, Adrien Silva is fit and available, and the Portuguese should line up alongside Hamza Choudhury. The attacking lineup though, should remain unchanged, with Fousseni Diabate and Riyad Mahrez manning the flanks, and Jamie Vardy and Kelechi Iheanacho the strike partnership. 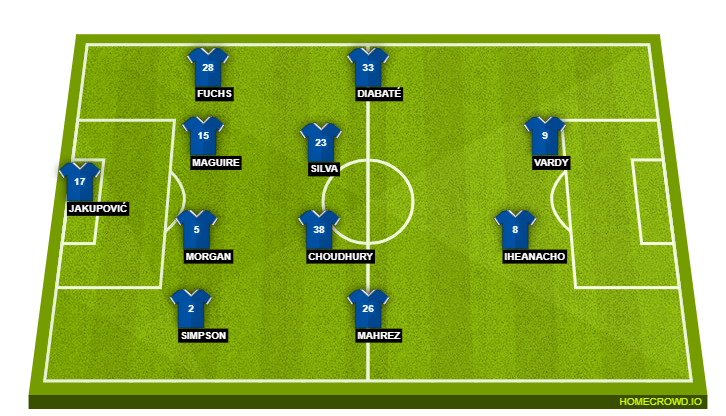 All eyes on the prize. (Photo courtesy – Michael Regan/Getty Images)

Still in the race to win the Golden Boot, Harry Kane needs at least a hat-trick to end as the Premier League top scorer for the third successive season. And, he couldn’t have picked a better opponent in his bid to return to the top of the standings.

Against no other opponents has the England international scored more goals than against Leicester. His tally of nine goals includes two hat-tricks, with five goals in his last two meetings. Expect Kane to be on the score sheet once again, with the striker running Salah close on the final day.

Two sides that haven’t been in the best of forms will be looking to end the season on a high when Spurs and Leicester face off on Sunday. With a purposeful Harry Kane in tow though, and Leicester going through one of the worst patch of form in all of Premier League, the hosts should have enough in the tank to get all three points.

Expect Harry Kane to find the back of the net once again, although he might fall just short of Mohamed Salah in the end. The Hard Tackle predicts a comfortable outing, beating Claude Puel & co. 2-0.