Liverpool will look to clinch a place in the top four when they host Brighton & Hove Albion at Anfield on Sunday in the final gameweek of the season.

The long, winding Premier League season will finally come to an end on Sunday with all ten games being played at once. One of those games deals with some high stakes as Liverpool look to officially book their place in next season’s Champions League, when they welcome Brighton & Hove Albion to Anfield.

The Reds’ form has plummeted in the Premier League of late, largely concentrating on winning the Champions League final later this month. Liverpool have failed to win any of their last three league games, losing the most recent one to Chelsea as the top four race was blown wide open.

Brighton, on the other hand, would be coming into the game riding high on confidence and emotion despite their midweek loss to Manchester City. Chris Hughton’s men have secured their place in the English top-flight for another season and would be looking to end their with another shock result.

The reverse fixture, played at the Amex Stadium back in December, saw Liverpool hand out a 5-1 hammering to Brighton. Ahead of their latest meeting on Sunday, The Hard Tackle takes a closer look at the encounter.

Jurgen Klopp has a fully blown-out injury crisis on his hands ahead of the visit of Brighton & Hove Albion. While the Liverpool boss could be without five first-team players on Sunday, he is down to his bare bones as far as midfield options are concerned.

Alex Oxlade-Chamberlain will play no further part this season due to a long-term knee injury while Emre Can is also on the sidelines due to a back problem. Adam Lallana has only recently returned to training after recovering from his most recent injury, although he is unlikely to start.

With no other options at his disposal, Klopp is likely to field Jordan Henderson and James Milner in midfield, with Trent Alexander-Arnold getting another opportunity to flourish in the middle. With the youngster being deployed in midfield, Nathaniel Clyne should almost certainly feature at right-back with Joe Gomez on the sidelines.

The Englishman’s campaign has been brought to a grinding halt after underwent surgery on his ankle injury. The fourth player on the treatment table is Joel Matip, who will not play again this season either due to a thigh injury. Meanwhile, Sadio Mane is a doubt due after missing training this week.

Should he be unavailable on Sunday, we might just see Ben Woodburn get his long awaited maiden game of the campaign, with Mohamed Salah and Roberto Firmino the other two players in the front trio.

Chris Hughton does not have any fresh injury concerns on his hands ahead the trip to Anfield. On Sunday, the Brighton manager will be without just Steve Sidwell, who has been struggling with a persistent back injury all season long and will be unavailable yet again.

Hughton will look to finish the season with another big name scalp under his side’s belt, which is why he is likely to name his first-choice team on Sunday. The only change should, thus, be top scorer Glenn Murray returning in place of Leonardo Ulloa.

At the back, Shane Duffy and Lewis Dunk will be aiming to frustrate and stifle the impact of Roberto Firmino while Gaetan Bong will have the unenviable task of keeping Mohamed Salah quiet. Dale Stephens will also be key in keeping Firmino quiet, with the Brazilian dropping deep every now and then.

Anthony Knockaert should again be a factor with his pacy outlet, keeping Andrew Robertson on his toes. Pascal Gross, meanwhile, should typically look find pockets of spaces and get into scoring positions to support Murray upfront. 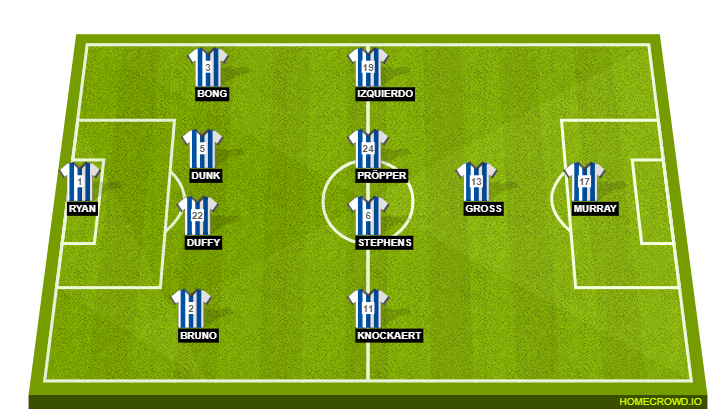 Brighton’s talisman has scored several important goals over the course of a memorable campaign, both for him and the club. The Seagulls will look towards the German attacker once again on Sunday as they aim to end their season on a high, possibly also handing Chelsea the final top four slot.

A place in next season’s Champions League group stage is still not guaranteed for Liverpool, and Jurgen Klopp will aim to get there the easy way instead of the harder route of winning the final against Real Madrid. There also is the small matter of Mohamed Salah looking to set the Premier League scoring record for a single season.

The Liverpool talisman should, thus, be highly motivated to create history and guide his side to victory one more time. Brighton, though, should provide some stern resistance on the day. But, in the end, the hosts should have enough firepower to secure a narrow win – we predict a 2-1 win for Klopp & co.