Manchester City will be aiming to return to winning ways when they play hosts to Brighton & Hove Albion at the Etihad on Wednesday.

The matches are coming thick and fast as the long, winding Premier League season comes to a swift end. Newly crowned champions Manchester City will play their last game at home this term when they welcome Brighton & Hove Albion to the Etihad on Wednesday.

Manchester City’s record breaking season has been well documented. On course for the highest ever points tally in a Premier League season as well as goals scored and wins, there has been very little haulting the Citizens’ juggernaut under Pep Guardiola, although their most recent game was perhaps their worst performance this season – a 0-0 draw against Huddersfield.

Brighton, on the other hand, come into the game buoyed after their stirring 1-0 win over Manchester United that saw them confirm their top flight status for next season. Chris Hughton’s men now have a fantastic opportunity to finish in the top half of the table, with 10th-placed Newcastle United just a point ahead.

The reverse fixture, played at the Amex Stadium in August, saw Manchester City grab a 2-0 win, although the Premier League new boys made them work hard for it. Ahead of their latest meeting, The Hard Tackle takes a closer look at the encounter.

Pep Guardiola has just one pressing injury concern ahead of the visit of Brighton. On Wednesday, the Manchester City boss will have just Sergio Aguero unavailable for selection, with the Argentine still on the treatment table due to a knee injury.

The Manchester City top scorer’s absence should be continued to be filled by Gabriel Jesus, who should have Raheem Sterling and Leroy Sane for company in attack, with Bernardo Silva likely to be an impact substitute for the umpteenth time this season.

The midfield might see one change though, with Guardiola likely to name Ilkay Gundogan in the starting lineup in David Silva’s stead. A similar pattern should continue at the heart of the Manchester City defence, with Vincent Kompany available after missing the Huddersfield game due to a minor knock.

The Manchester City captain is expected to line up alongside Aymeric Laporte at the heart of the defence, with Fabian Delph and Kyle Walker likely to be the full-backs once again, although Benjamin Mendy should make his presence felt later on in the game as he continues building up his fitness.

Chris Hughton does not have any fresh injury concern ahead of the trip to the Etihad. On Wednesday, the Brighton boss will travel to the home of the champions without long-term absentees Izzy Brown (knee) and Steve Sidwell (back), with the latter set to end the season without an appearance to his name.

Hughton, meanwhile, is unlikely to make many changes to the side that beat Manchester United last Friday. Club captain Bruno might be the only change for the visitors, with Ezequiel Schelotto likely to take his place at the right side of the Brighton defence.

In Bruno’s stead, Lewis Dunk should don the armband, and he will be eager to make amends for the own goal in the reverse fixture. Dunk should have Shane Duffy for company at the heart of the defence once again, with the duo looking to deny Gabriel Jesus any time and space.

In midfield, Davy Propper and Dale Stephens will look to work tirelessly once again to kill off space in the middle of the park and stifle De Bruyne and Gundogan, while Anthony Knockaert and Jose Izquierdo will have to work hard to stop the Manchester City full-backs in their tracks and initiate swift counter attacks before linking up with talisman Pascal Gross and Glenn Murray. 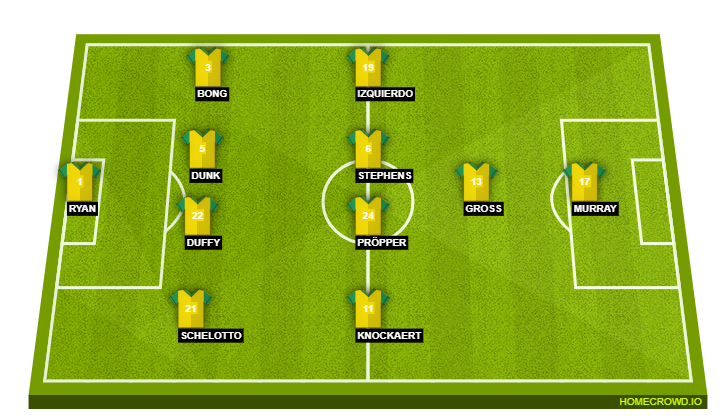 It has been tough season for Mendy, whose learning curve in England has been flat due to a long-term knee injury. Now back to full fitness, he can continue getting some crucial minutes under his belt in the remaining two games, with Anthony Knockaert set to provide him his biggest test yet.

Manchester City struggled a lot against a disciplined Huddersfield side, and are likely to go through it all once again when Brighton come visiting. The Seagulls should, in fact, provide Pep Guardiola’s men a sterner test, having been a more solid outfit than Huddersfield this season.

But, the champions have shown a desire to learn from their shortcomings very quickly, and they should do just enough to get all three points on Wednesday. The Hard Tackle predicts a narrow 1-0 win for Manchester City to set the record tally of points for a single Premier League season.