Barcelona and Real Madrid renew their rivalry in a rather inconsequential match as they face off in the El Clasico at Camp Nou on Sunday.

The long winding La Liga season is in its final stretch, and Sunday will bear witness to one of the most insignificant El Clasicos in recent memory. Pride is perhaps, the only thing that will be at stake when Barcelona welcome Real Madrid to Camp Nou, aiming to continue their unbeaten run.

Barcelona do have the added incentive of becoming the first La Liga side to go unbeaten all season, and will look at the game to get a step closer to achieving that. The Blaugrana have already reclaimed the La Liga title, after beating Deportivo La Coruna 4-2 at the Riazor last weekend.

Real Madrid, on the other hand, are coming into the game on the back of sealing a place in the UEFA Champions League final for the third successive year. Their league fortunes haven’t exactly been so good, with Zinedine Zidane’s men a massive 15 points adrift of Barcelona, and lagging behind Atletico Madrid in the race for the runners-up spot.

Barcelona cruised to a 3-0 win over Real Madrid at the Bernabeu back in December. (Photo courtesy – Denis Doyle/Getty Images)

The last time these two sides met after the title race had already been wrapped up was in 2008, when Real Madrid had just won the league. The reverse fixture at the Bernabeu had seen Barcelona cruise to a 3-0 win, and ahead of their latest meeting, The Hard Tackle takes a closer look at the encounter.

Ernesto Valverde has the luxury of picking from a fully fit squad ahead of the visit of bitter rivals Real Madrid. Captain Andres Iniesta was the only concern for the Barcelona boss heading into the tie, but the veteran midfielder should be fit and motivated enough to start his 38th and final Clasico game.

Giving him company in midfield, should be the tireless Ivan Rakitic, Sergio Busquets and Philippe Coutinho, touted by many to take over from Iniesta on a permanent basis next season. The Brazilian, in particular, has been impressive since joining Barcelona, showcasing his creative abilities while also posing a threat at goal himself from range.

At the back, the usual suspects should start, with Sergi Roberto available once again after serving a one-match ban last weekend against Deportivo. The Spaniard is likely to line up in the back-four alongside Gerard Pique, Samuel Umtiti and Jordi Alba, who will look to trouble an inexperienced Real Madrid right-back on the night with his marauding runs.

Upfront, Luis Suarez will be aiming to overtake Cristiano Ronaldo into second in the race for the Pichichi award, an honour that is likely to be taken by teammate Lionel Messi, who has an eight-goal lead at the top of the standings, and will be looking to extend it on Sunday.

Zinedine Zidane has just a couple of pressing injury concern ahead of the trip to Camp Nou, with Dani Carvajal recovering from a hamstring injury he picked up in the first leg of the Champions League semi-final against Bayern Munich last month, and Raphael Varane battling to shrug off the effects of a knock sustained in the second leg earlier this week.

Carvajal will definitely miss the game on Sunday, and he has left a huge void in his stead, with the inexperienced Achraf Hakimi and Lucas Vazquez being Zidane’s options, in addition to the versatile Nacho. But, Nacho is likely to deputise at the heart of the Real Madrid defence for Varane.

With Vazquez struggling as a makeshift right-back against Bayern, Hakimi could start, with Sergio Ramos and Marcelo completing the back-four. Behind them, Keylor Navas should once again start in goal, and a repeat of Tuesday’s performance should enable Real Madrid to a big win.

Up ahead in midfield, Casemiro is likely to return to the starting lineup after being a surprise exclusion in the midweek game, coming in in place of Mateo Kovacic. But, Luka Modric and Toni Kroos should retain their places in the side, and will be the creative forces of the visitors.

Up ahead in attack, Karim Benzema may have done enough to keep his place in the lineup, with Cristiano Ronaldo likely to start as well. The third slot is likely to be filled in by Gareth Bale for possibly the last hurrah for BBC, with Isco unlikely to be fit enough to start, and Marco Asensio failing to impress against Bayern. 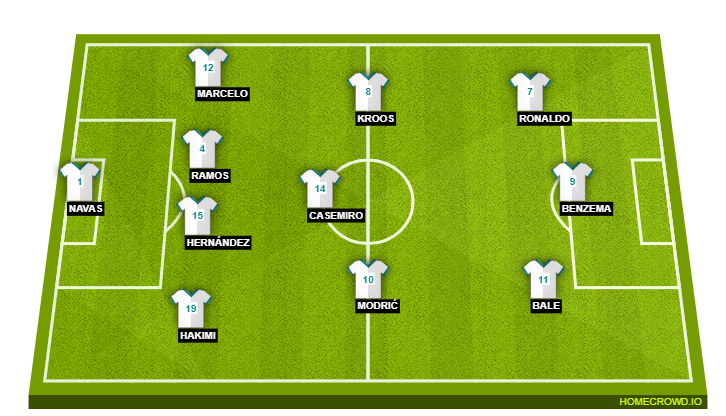 To say that Benzema has endured a below par season would be a huge understatement of the struggles he has endured. Goals have been hard to come by for the Frenchman, who hasn’t been sharp at all. But, the Bayern Munich game signalled a return to form.

A repeat of the same on Sunday could put Real Madrid on course for a win that will not just help them salvage some pride in domestic football, but also stop Barcelona from going the entire season unbeaten. If the Bayern performance turns out to be a temporary upswing, the concerns would mount for Los Blancos ahead of the Champions League final.

Barcelona may have won the La Liga title. Real Madrid might not have much of an incentive to perform in league football anymore. But, El Clasico is one game that will see both sides give their all to get a win, at any cost.

Therefore, we should see a keenly contested affair between two top quality sides, with the match likely to be closer than the one at the Bernabeu. Expect Lionel Messi to be in his element, with Karim Benzema to step up once again. The Hard Tackle predicts a 2-2 draw on the night, with Barcelona getting closer to achieving the ‘Invincible’ dream.