Chelsea will look to reach the FA Cup final for a second successive year when they meet Southampton at Wembley for the semi-final on Sunday.

The FA Cup final fixture is now just one game away from being completed after Manchester United’s win over Tottenham on Saturday. Up next, is the second semi-final as Chelsea and Southampton meet for the second time within a week, at Wembley on Sunday.

Chelsea come into the game on the back of a slight turnaround in form that has seen them win two games in a row for the first time since February. The Blues had progressed to the semi-finals with a 2-1 win over Leicester City that saw Pedro score the winner in extra time.

Southampton, on the other hand, have found wins hard to come by all through the season, with their last victory coincidentally coming in the FA Cup Quarter-Final all the way back in February. This run of results has put them on the cusp of relegation from the Premier League as well.

The two sides last met only last week as Chelsea came from two goals behind to beat Southampton 3-2, courtesy a brace from super sub Olivier Giroud and the late winner by Pedro. Ahead of their latest meeting on Sunday, The Hard Tackle takes a closer look at the encounter.

Antonio Conte does not have any fresh injury concerns to deal with ahead of the FA Cup semi-final. On Sunday, the Chelsea boss will be without just three first-team players due to various injury problems, although none are to his first-choice players.

David Luiz (knee), Ethan Ampadu (ankle) and Danny Drinkwater (groin) are the players on the treatment table, and have missed the trip to Wembley. Meanwhile, Conte is likely to make a number of changes after resting key players in the midweek win over Burnley.

At the back, the Chelsea manager should make just one change, with Antonio Rudiger making way for Andreas Christensen. In midfield, Cesc Fabregas is likely to be recalled, although Tiemoue Bakayoko made a case for a start against Burnley. Marcos Alonso is another key player absent as he serves the second of his three-match ban.

Emerson Palmieri is unlikely to start again either, with his fitness not being up to the mark. In his stead, Davide Zappacosta should start as the left wing-back. Upfront, Eden Hazard and Willian should return to the side, with Pedro and the struggling Alvaro Morata making way for the duo.

Mark Hughes does not have many pressing roster issues hampering his preparation for the FA Cup semi-final. The Southampton boss will be without just three first-team players due to injuries and suspension at Wembley.

Mario Lemina (back) and Sofiane Boufal (illness) are major doubts for the game, and are likely to miss out on Sunday. Jack Stephens will also be unavailable as he serves the last of his three-match ban following his dismissal against Arsenal two weeks ago.

Hughes, meanwhile, is unlikely to shuffle his side much, with the players starting to forge a strong team in a style similar to the Conte employs. At the back, Jan Bednarek should start one again in a back-three, featuring captain Maya Yoshida and Wesley Hoedt.

The midfield duo should once again feature Oriol Romeu and Pierre-Emile Hojbjerg, with the duo forging a solid partnership in the middle of the park. Cedric Soares and Ryan Bertrand have been the ever presents for Southampton this season, and the consistent duo will be key men on Sunday with their exploits in the wide areas.

Upfront, James Ward-Prowse will pose a threat with his ability on dead balls, while Dusan Tadic will look to use his free role to create a similar impact as last week when he scored the opening goal against Chelsea. Charlie Austin should lead the line for the Saints. 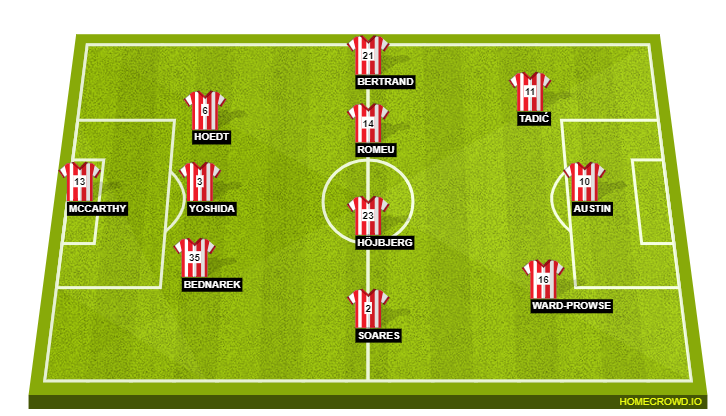 With Alvaro Morata’s early season form nowhere to be seen, there had been a void at the head of the Chelsea attack for several weeks. But, Olivier Giroud has stepped up considerably in recent games, with last week’s win over Southampton being the perfect example of the same as he came off the bench to inspire a comeback win.

The Spaniard is unlikely to start on Sunday, and Giroud will have another chance to impress right from the get-go, and should he do so, the Blues could be on course for another popular win.

Southampton finally seem to be finding their feet after a turbulent campaign, with goals starting to flow in more regularly. The FA Cup has proven to be a fine campaign for the Saints as well, but the match comes at a time when Chelsea have turned their form around to some extent.

With Olivier Giroud in fine form, the Blues should have enough quality in their ranks to topple the Saints on the evening. But, it should be a closely contested affair throughout the ninety minutes, with Chelsea prevailing on the odd goal. The Hard Tackle predicts a 2-1 win for Antonio Conte & co.