Real Madrid will look to continue their march up the La Liga table when they welcome Athletic Bilbao to Santiago Bernabeu on Wednesday.

The La Liga title race might have been over for them weeks ago, but Real Madrid have their sights firmly on the second spot. With local rivals Atletico Madrid just four points ahead, Los Blancos cannot afford another slip-up, and will aim to continue their winning ways when they host Athletic Bilbao at Santiago Bernabeu on Wednesday.

Real Madrid have found a stable footing in the league in recent months, with their last loss coming more than three months ago. The odd draws though, have kept Atletico Madrid a safe distance ahead, making a win over Los Leones imperative for Zinedine Zidane’s men.

Athletic Bilbao, on the other hand, have rarely managed to string a run of positive results together this season, with their last instance of back-to-back wins coming way back in early January. As a result, Jose Angel Ziganda’s men are languishing at 13th place on the table, with Europa League qualification out of the question.

The reverse fixture, played at San Mames in December, was a goalless draw that had its fair share of action, with Real Madrid captain, Sergio Ramos being sent off late in the game. Ahead of their latest meeting on Wednesday, The Hard Tackle takes a closer look at the encounter.

Zinedine Zidane does not have many pressing injury concerns to deal with ahead of the visit of Athletic Bilbao. Nacho is the only player on the sidelines as he continues recovering from a thigh injury, and will be unavailable for a few more weeks.

The Real Madrid boss though, should recall a number of big name players after playing a largely second string side against Malaga last weekend. Raphael Varane and Marcelo should, thus, return in defence, with Dani Carvajal and Sergio Ramos retaining their places.

Ramos in particular, will be looking to make a point after his dismissal in the reverse fixture. In midfield, Luka Modric and Toni Kroos are likely to return as well, providing the hosts added creative impetus, with the tireless Casemiro the third act in the midfield trio.

Isco seems to be back in Zidane’s good books after a number of superlative performances, including against Malaga, and should retain his place in the lineup. In front of him, Cristiano Ronaldo and Gareth Bale are certain to return, with Karim Benzema failing to make much of an impression on the weekend.

Jose Angel Zigana does not have any major problems hampering his preparation for the midweek game. At the Bernabeu on Wednesday, the Athletic Bilbao manager will have just two players missing, with Kike (hamstring) and Xabier Etxeita (knee) closing in on their return to action.

At the back, Unai Nunez and Inigo Martinez have forged a strong partnership, but both of them have been prone to errors and lapses in concentration. The duo will need to be at their guard at all times on the night, with Cristiano Ronaldo and Gareth Bale in fine form heading into the game.

Oscar de Marcos and Mikel Balenziaga have been Ziganda’s trusted lieutenants on either side of defence, and should retain their places in defence. In midfield, Mikel San Jose has been colossal figure, and he will be a key man for the visitors to stifle Real Madrid’s plays down the middle.

The attacking unit picks itself up, with the in-form quartet of Markel Susaeta, Raul Garcia, Inigo Cordoba and Inaki Williams set to start once again, leaving veteran striker Aritz Aduriz with a place on the bench. 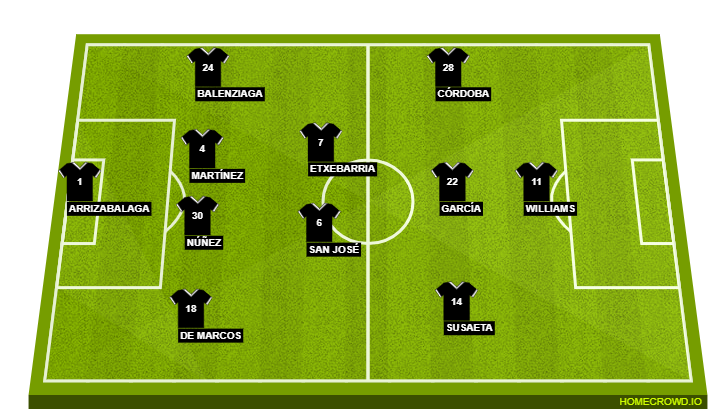 Which Nunez will turn up on Wednesday? (Photo courtesy – Ander Gillenea/AFP/Getty Images)

It wasn’t that long ago when Nunez was being linked with a shock move to Barcelona. Indeed, the 21-year-old had enjoyed a strong start to the season, and has been the most regular feature at the heart of the Athletic Bilbao defence this season. But, he has petered out in the second half of the season.

Against a rampaging Real Madrid side though, he can ill afford a lapse in concentration, in order to keep Cristiano Ronaldo quiet for longer periods. With both Real Madrid and Barcelona reportedly in search of a centre-back, a strong showing could just reignite the interest in him from top clubs.

Zinedine Zidane has iterated that he has his sights firmly set on usurping Atletico Madrid for second spot on the La Liga table, and he is likely to field a strong side on Wednesday. The likes of Luka Modric, Toni Kroos and Gareth Bale will be looking to bounce back after a poor outing against Juventus.

Add to that, the rampaging Cristiano Ronaldo, who has been, hands down, the best player in Europe since the turn of the year, and it is likely to be a long night for Athletic Bilbao. But, Real Madrid’s frailties at the back will give the visitors a sniff at their goal here and there, although they’re unlikely to topple their hosts. We predict a 3-1 win for Zidane & co.