The last two UEFA Champions League semi-finalists will be decided on Wednesday as the quarter-finals come to an end. The closest of the ties sees Bayern Munich hosting Sevilla at the Allianz Arena, looking to build on their one-goal lead from the first leg and advance to the semi-finals.

The hosts have been imperious in Europe’s top tier competition since Jupp Heynckes took charge, winning each of their games. The Bavarian giants will be buoyed heading into the second leg, having clinched their sixth successive Bundesliga title over the weekend.

Sevilla, on the other hand, have suffered an alarming drop in form since beating Manchester United in the Round of 16. Vincenzo Montella’s men have failed to win each of their subsequent four games, including a heavy 4-0 defeat at the hands of Celta Vigo over the weekend that has dented their hopes of qualifying for the Europa League next season.

The first leg, played last week at the Ramon Sanchez Pizjuan Stadium, saw Bayern come from behind to clinch a 2-1 win. Ahead of the second leg meeting on Wednesday, The Hard Tackle takes a closer look at the encounter.

Jupp Heynckes is grappling with injuries to several key players ahead of the visit of Sevilla. On Wednesday, the Bayern Munich boss will be without as many as four key first-team players due to various injuries.

Kingsley Coman (knee) and Manuel Neuer (foot) are long-term absentees, although the latter has finally resumed training and should be available next month. David Alaba (back) and Arturo Vidal (knock) will also miss out, a major blow to Heynckes and his squad.

There is some good news though, with Jerome Boateng fit to play after recovering from a bruised foot. The German international should line up alongside compatriot Mats Hummels at the heart of the Bayern defence, while Juan Bernat is likely to continue deputising for Alaba at left-back.

Up ahead in midfield, Vidal’s absence would pave the way for a more creative presence in the form of Thiago Alcantara, who should have Javi Martinez covering up the spaces behind him to give him the freedom to open up play in the final third.

Crucially though, several Bayern players will need to be extremely disciplined so as to be safe from suspension, with the likes of Jerome Boateng, Joshua Kimmich, Robert Lewandowski, Franck Ribery, Sebastian Rudy and Corentin Tolisso just one booking away from incurring a one-match ban.

Vincenzo Montella has a number of pressing injury concerns to deal with as well ahead of their trip to Munich. On Wednesday, the Sevilla manager could be without as many as five players, with Simon Kjaer (knee) and Sebastian Corchia (groin) the biggest absentees.

Kjaer’s place is likely to be taken up by Gabriel Mercado, who has recovered from a knock to make the travelling squad. The Argentine will partner Clement Lenglet at the heart of the Sevilla defence, and the duo will need to be alert to the threat of Robert Lewandowski at all times to keep the Polish hitman quiet.

Miguel Layun is ineligible to feature for the La Liga outfit, having already represented Porto in the group stage of the competition. In his place, Jesus Navas will be the right-back for the visitors, providing a dynamic outlet on the right flank, although he’ll need to be on his toes against a rejuvenated Frank Ribery.

There is some good news for the visitors, meanwhile, with Ever Banega available after serving a one-match ban in the first leg. The Argentine will provide the creative impetus in midfield for Sevilla, with Steven N’Zonzi keeping things tight in the middle.

Another Argentine, Joaquin Correa is fit and available as well, and should be part of a trick attacking quartet featuring Pablo Sarabia, Franco Vazquez and Wissam Ben Yedder, who will be looking to repeat his exploits from the second leg against Manchester United to produce another stunning result. 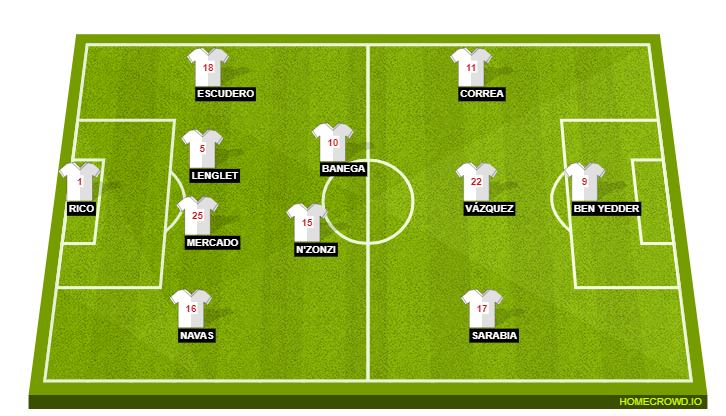 A lot of what Bayern create goes through the middle, with James Rodriguez and Thiago Alcantara combining for a two-pronged creative force. Should Sevilla kill off the supply line between the spaces, they might stay in the match for longer periods, giving their attacking men the chance to grab a foothold in the game.

This is where N’Zonzi will be key, ever the go-to man in big games this season. The Frenchman will also look to provide the aerial threat in set-piece situations, although his primary job will be to keep Thiago and James quiet, something he certainly is well equipped to do.

Sevilla have proven to be a surprise package in the Champions League this season, with the win over Manchester United one of the upsets of the campaign. They have also shown that their poor form in La Liga has no bearing whatsoever in Europe, and should again be a hard side to break down.

But, Bayern Munich, under Jupp Heynckes, are imperious at home, a stomping ground where a certain Arjen Robben almost always comes into his own. Robert Lewandowski has a point to prove as well, and it could well turn out to be a long night for the visitors. We predict a 3-0 win for Bayern to qualify for the semi-finals.