Barcelona will aim to seal their progress to the semi-finals when they take on AS Roma at Stadio Olimpico in the quarter-final second leg on Tuesday.

The UEFA Champions League quarter-finals stage will come to an end this week with the second leg fixtures. On Tuesday, AS Roma will look to overturn a steep three-goal lead held by Barcelona and claim a shock qualification to the semi-finals when the two sides meet at Stadio Olimpico.

The Giallorossi have suffered an alarming drop in form in recent games, having failed to win any of their last three. The 2-0 loss to Fiorentina has put immense pressure on Eusebio Di Francesco’s men in the top four race, with Inter Milan breathing down their necks.

Barcelona, on the other hand, do not have any such problems as they are on the cusp of creating a La Liga record and clinching the title. In Europe, Ernesto Valverde’s men are yet to lose a game, although consistent goalscoring has been a problem for them throughout their campaign.

The first leg, played last week at Camp Nou, saw Barcelona cruise to a 4-1 win, courtesy largely to two unfortunate Roma own goals. Ahead of the second leg meeting on Tuesday, The Hard Tackle takes a closer look at the encounter.

Eusebio Di Francesco has a few pressing injury concerns to deal with ahead of the visit of Barcelona. On Tuesday, the AS Roma manager could be without as many as three first-team players, with Cengiz Under (knee) and Diego Perotti (calf) doubtful, while Rick Karsdorp (knee) will definitely miss out.

But, the good news surrounds the availability of Radja Nainggolan, whose presence in midfield was sorely missed in the first leg. The Belgian should shore up the midfield on Tuesday, providing a dominant presence in the middle while also advancing forward with purpose, when in possession.

Nainggolan is likely to have Daniele De Rossi and Kevin Strootman for company in midfield, with the latter providing the creative touch from a deep lying position. Upfront, the trio of Alessandro Florenzi, Stephan El Shaarawy and Edin Dzeko should line up once again.

The defensive line should be the same as last week, and Kostas Manolas and Federico Fazio will have the unenviable task of keeping Lionel Messi and Luis Suarez quiet on the night. Alisson will need to be at his best against Messi, in particular, who looks in spectacular touch at the moment. 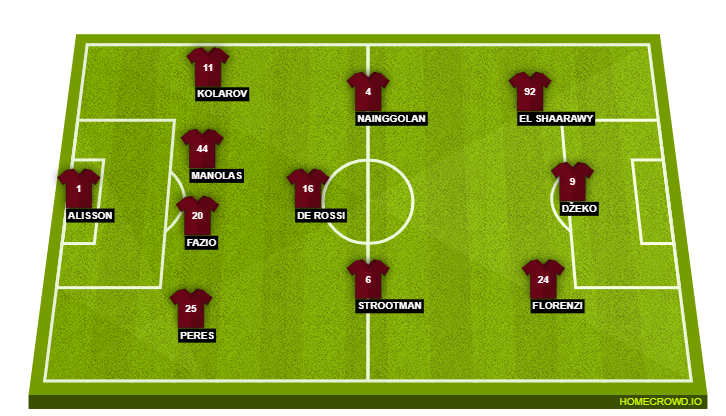 Ernesto Valverde has just one player on the treatment table ahead of the trip to the Italian capital. The Barcelona boss will be travelling without Lucas Digne, who is on the sidelines recovering from a hamstring injury he sustained while on international duty with France.

Valverde prepared for the match by resting the likes of Samuel Umtiti and Sergio Busquets, while Andres Iniesta and Jordi Alba only made appearances off the bench against Leganes. And the fresh quartet are likely to return to the starting lineup against Roma, creating a strong core for the visitors.

Sergi Roberto might be rested on the night, with the Spaniard only one booking away from being suspended. In his absence, Nelson Semedo should continue as the right-back, with Paulinho lining up on the right side of midfield.

The strike partnership picks itself up, with Lionel Messi and Luis Suarez taking their places upfront. Suarez, in particular, will be aiming to build a goalscoring run in the Champions League, after ending his European drought in the first leg last week.

While goals will be paramount for the hosts to stand any chance of toppling Barcelona and advance to the semi-finals, they will also need to ensure that they don’t let any chance in either. That is where Alisson will be key, standing stubbornly between the visitors and their bid to put the tie to bed.

The Brazilian is enjoying a fine season at Stadio Olimpico, which has ignited interest in his services ahead of the summer transfer window. A strong performance here, regardless of the ultimate result, will only enhance his stature further, and make him even more sought-after.

Barcelona have one foot in the semi-finals despite not being at their best in the first leg, and the second leg will be more about controlling the proceedings and cruising to a win. This is where the prowess of Andres Iniesta and Sergio Busquets in midfield will come in handy.

Lionel Messi is in brilliant touch at the moment, and should be a factor once again, although Radja Nainggolan’s return makes the second leg interesting. We predict a more evenly contested affair, with Barcelona narrowly edging Roma to advance to the semis.