Tottenham Hotspur will look to continue their unbeaten league run when they travel to the Bet365 Stadium to take on Stoke City on Saturday.

We are well into the end of season run-in in the Premier League, with just six gameweeks left for the long winding season to come to an end. At the Bet365 Stadium, Stoke City face another crucial game in their bid to keep their top-flight status intact, when Tottenham Hotspur come visiting on Saturday.

Stoke City are edging closer and closer to relegation from the Premier League, having won just one game since the turn of the year, and none of their last eight. The terrible run of results has dropped them down to 19th on the table, with safety effectively four points away considering their poor goal difference.

Tottenham, on the other hand, are unbeaten in 2018, and have dropped points in just three of their 11 games so far. The crucial 3-1 win over Chelsea last weekend has put them eight points ahead of the Blues in fourth, and in a commanding position to secure a top four spot again.

The reverse fixture, played back in December, saw Tottenham coast to a 5-1 win over Stoke City at Wembley, with Harry Kane scoring a brace. Ahead of the latest meeting between the two sides, The Hard Tackle takes a closer look at the encounter.

Paul Lambert does not just have problems plaguing him on the pitch, but off it as well, with a number of roster issues hampering his preparations. On Saturday, the Stoke City boss could be without as many as five first-team players due to injuries and suspension.

The likes of Eric-Maxim Choupo-Moting (groin), Lee Grant (wrist) and Kostas Stafylidis (rib) will definitely miss out due to their respective injuries, while Charlie Adam serves the second of his three-match ban. Kurt Zouma (knee) could be in contention, but he faces a late fitness test to determine his availability.

The key man for the hosts will be Jack Butland, who has been a colossal figure between the sticks for the Potters, barring a mistake here and there. With the backline struggling to be solid, much of the pressure will be on him once again, against a rampaging Tottenham attack.

On the other end of the pitch, Xherdan Shaqiri will be pivotal once again, having been one of the few players who have performed well this season. The Swiss will perhaps, be the only test for the Tottenham defence, with his ability to create chances with his long-range efforts and ghosting runs. 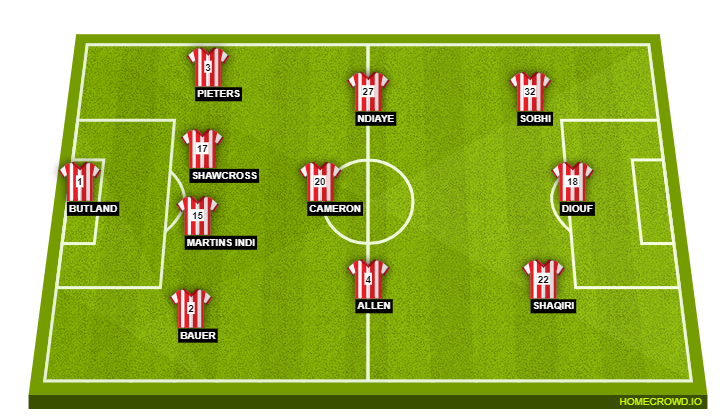 In heavy contrast to the hosts, Tottenham haven’t had many problems bothering them in 2018, and Mauricio Pochettino has had very few players unavailable. On Saturday, the Spurs boss will be without just Harry Winks, who is recovering from an ankle injury.

The biggest news in recent days has been Harry Kane’s remarkably quick recovery from his own ankle problem, having suffered ligament damage to his right ankle. After coming back earlier than anticipated, the Englishman will look to rekindle his bid to win the Golden Boot once again this season, and will lead the line for the visitors.

Supporting him in attack will be Son Heung-Min, Christian Eriksen and Dele Alli, all of whom look to have come into their own at just the right time. Mousa Dembele will be a colossal figure in midfield, stopping the Stoke attacks right in their tracks before recycling the ball quickly for his side’s forwards.

At the back, Toby Alderweireld is likely to miss out another game despite being fully fit, as talks over his uncertain future continue gathering steam. In his stead, Davinson Sanchez should continue once again alongside Jan Vertonghen, with Ben Davies and Kieran Trippier the full-backs.

All eyes on the prize. (Photo courtesy – Michael Regan/Getty Images)

The race to win the Golden Boot seemed to have become a one-man competition, with reports that Harry Kane will miss several weeks of action due to an ankle injury. After making an unbelievably quick recovery, that race seems to have reignited, although Mohamed Salah has taken a five-goal lead on the current holder.

Against Stoke though, Kane will have the chance to bridge that gap, with Salah likely to be rested against Everton after suffering a groin injury in the midweek Champions League win. The Tottenham talisman enjoys playing against the Potters, having scored 8 goals in 4 matches against them, and one wouldn’t back against him adding to the tally on Saturday.

The race to win the Golden Boot is well and truly alive.

Scoring 3 against Chelsea at Stamford Bridge, minus Harry Kane for the most part, is indication enough that Jack Butland will have a torrid time on Saturday. Stoke City are largely toothless in attack, and extremely suspect at the back, while Tottenham are everything the Potters aren’t.

This tie seems headed only one way, with Paul Lambert & co. set to have a long day’s work at the Bet365 Stadium, especially against a Tottenham side that is riding high on confidence and momentum. The Hard Tackle predicts a fifth successive four-goal win for Mauricio Pochettino & co. over Stoke.