Arsenal will look to continue their recent upturn in form when they welcome relegation battling Stoke City to Emirates on Sunday.

Gameweek 32 of the Premier League will come to a conclusion on Sunday with two London fixtures. At Emirates, Arsenal will be aiming to continue building more positive momentum in the home stretch of the season as they prepare to play hosts to struggling Stoke City.

The Gunners have shown sign of a late turnaround in fortunes, having overturned a four-game losing run by winning three matches on the bounce. A top four finish still seems out of the question, however, with fourth-placed Tottenham 13 points ahead of Arsene Wenger’s men, with just seven games to go.

Stoke City, on the other hand, continue to struggle in their battle to retain their Premier League status as they languish in 19th place on the Premier League table. The Potters have managed to win just one game in 2018, and none of their last seven, making a victory imperative on Sunday.

The reverse fixture, played back in August at the Bet365 Stadium, saw Stoke narrowly beat Arsenal thanks to the solitary goal by loanee Jese Rodriguez. Ahead of their latest meeting on Sunday, The Hard Tackle takes a closer look at the encounter.

Arsene Wenger does not have many pressing injury concerns ahead of the visit of Stoke City. On Saturday, the Arsenal boss will have just one long-term absentee in his squad as Santi Cazorla continues his recovery from an Achilles problem. Sead Kolasinac (knee) is a minor doubt, but he might be available.

Jack Wilshere, meanwhile, is fit and available after he failed to appear in either of England’s friendlies during the international break due to a knee complaint. Alexandre Lacazette is set to return to the fold as well after completing his recovery following a knee surgery.

The Frenchman, and Wilshere, though, should only make the bench, with one eye on the crucial Europa League clash against CSKA Moscow on Thursday. There could be other rotations on the cards as well, with Calum Chambers likely to start at the heart of the Arsenal defence and Mohamed Elneny starting in midfield with Granit Xhaka.

The key men for Arsenal will be Henrikh Mkhitaryan and Pierre-Emerick Aubameyang, who have rekindled their partnership at Emirates. The two will look to combine once again on Sunday, using their fantastic understanding to good effect against the struggling Potters.

Paul Lambert is grappling with a number of problems ahead of the trip to Emirates, with roster issues being one of the major battles that he faces in addition to form on the pitch. On Saturday, the Stoke City boss will be without six first-team players due to various problems within the squad.

Eric Maxim Choupo-Moting is a major absentee due to a groin injury. The Cameroonian international has the likes of Geoff Cameron (hamstring), Lee Grant (wrist) and Stephen Ireland (calf) for company on the treatment table, while Ibrahim Afellay has been banished from the squad by Lambert on disciplinary grounds.

Charlie Adam serves the first of his three-match ban after receiving a red card against Everton. Erik Pieters though, should be in contention once again after being suspended internally for a similar reason. The good news comes in the form of Mame Biram Diouf’s return, with the Senegalese recovering from a shoulder injury.

Diouf should slot straight back into the lineup, and he will look to strike a fine understanding with Xherdan Shaqiri in attack, with Ramadan Sobhi will provide the creative spark in the hole. Joe Allen will also be a key man with his tireless running, aiming to press the ball out of the Arsenal players in midfield. 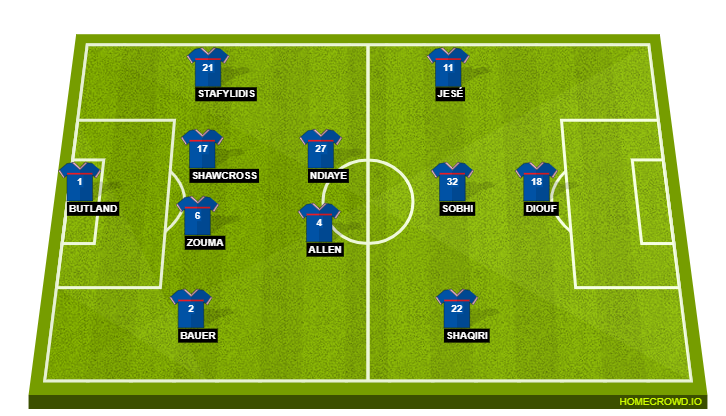 With Arsene Wenger likely to concentrate much of his firepower towards the Europa League, a few key midfielders are likely to be rested every now and then, particularly Aaron Ramsey and Jack Wilshere, who have a long list of injury history. In such a scenario, the presence of a resurgent Mohamed Elneny bodes well for Arsenal.

Fresh off signing a new deal with the Gunners, the Egyptian has been on a roll of late, and he will look to provide the steel in front of the backline. His presence would also provide Granit Xhaka the freedom to advance forward and influence attack more, making him an ideal deputy for Ramsey and Wilshere.

It doesn’t get easy for Stoke City, whose position has not improved following Mark Hughes’ dismissal. Arsenal, on the other hand, have largely been imperious at home, bar two contests against the Manchester sides, and have tended to swat away bottom half outfits with ease.

Expect it to be a long afternoon for the visitors and a comfortable one for Arsenal, with Pierre-Emerick Aubameyang continuing his goal rush. The Hard Tackle predicts a 3-0 win for Arsene Wenger & co.