Barcelona will look to continue their march towards a long-standing La Liga record when they visit the Ramon Sanchez Pizjuan Stadium to face Sevilla on Saturday.

The international break is finally over and club football will resume this weekend after a near-fortnight long hiatus. In La Liga, Barcelona are inching closer to La Liga glory, and will also look at take a step closer to league record unbeaten run when they take on Sevilla at the Ramon Sanchez Pizjuan Stadium on Saturday.

Sevilla may have enjoyed a stirring UEFA Champions League Quarter-Finals qualification run, but their league form of late has been underwhelming to say the least. Vincenzo Montella’s men have lost three of their last five games, a sequence of results that has dropped them down to sixth, and with a real chance of missing out on a Europa League spot.

Barcelona, on the other hand, have been going from strength to strength in every competition they have featured in. In the quarters of the Champions League and atop the La Liga table, eleven points clear of Atletico Madrid and looking primed to reclaim the title they lost to Real Madrid last season.

The reverse fixture, played at Camp Nou in November, saw Paco Alcacer lead Barcelona to a narrow win over Sevilla with a brace. The two sides are also set to meet each other in the Copa del Rey final later this month, but before that, The Hard Tackle takes a closer look at Saturday’s encounter.

Vincenzo Montella has a few roster issues to deal with ahead of the visit of Barcelona. On Saturday, the Sevilla boss could be without as many as four key first-team players due to various injury and suspension problems.

The biggest absentee for the Andalusians is Pablo Sarabia, who will miss out due to a one-match ban after being sent off against Leganes on Matchday 29. Meanwhile, there are doubts over the availability of Jesus Navas, Daniel Carrico and Sebastian Corchia, who are all recovering from different fitness issues.

In Sarabia’s absence, Nolito should move to the right flank, with Joaquin Correa returning to the lineup after missing the previous game through suspension. Upfront, Wissam Ben Yedder should continue as the focal point of attack, despite being rather unimpressive in league football action.

The rest of the lineup pretty much selects itself, with Steven N’Zonzi and Ever Banega lining up in the middle of the park. Banega, in particular, will pose a major threat with his abilities in set-pieces situations, with N’Zonzi a factor in corners.

At the back, Simon Kjaer should start, buoyed by Denmark’s strong defensive results in the international break. Alongside him at the heart of the Sevilla defence, should be Clement Lenglet, with Miguel Layun and Guilherme Arana being the full-backs. 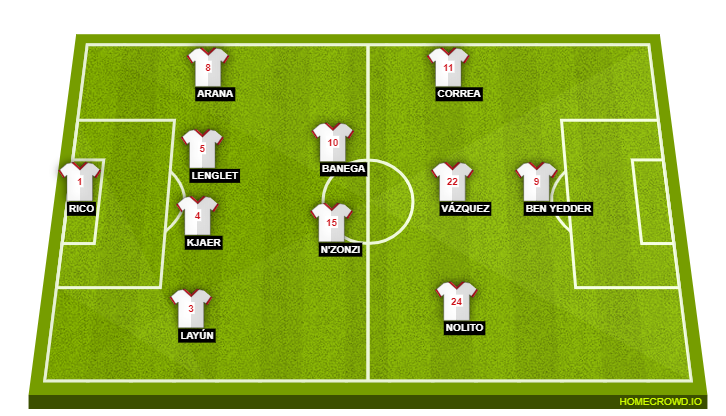 Ernesto Valverde is sweating over three massively worrying injury scares ahead of the trip to Sevilla. Marc-Andre ter Stegen, Gerard Pique (both knee) and Lionel Messi (hamstring) are all recovering from an injury sustained on or before the international break and are major doubts for Saturday’s tie.

With the crucial Champions League meeting with AS Roma not too far away, the Barcelona boss may choose to rest the trio, with ample cover in his squad for the players, while also considering the healthy advantage they enjoy over Atletico Madrid.

The trio’s respective places might, thus, be taken up by Jasper Cillessen, Thomas Vermaelen and Paco Alcacer. Meanwhile, Denis Suarez and Nelson Semedo have returned to training after missing more than a month of action due to their respective injuries. But, Sergio Busquets and Lucas Digne miss out.

Sergi Roberto should continue as the right-back, Samuel Umtiti and Jordi Alba completing the back-four. In midfield, Busquets’ absence should be covered by Andre Gomes, who should start alongside Paulinho, with Ivan Rakitic starting on the bench after making the long trip from USA.

Luis Suarez should return to the starting lineup, starting alongside Alcacer in the striker partnership, with Philippe Coutinho and Ousmane Dembele being the creative forces for Barcelona. The duo will look to set up the chances for the strike duo while also having a go at Sergio Rico’s goal with long-range efforts.

Sevilla’s form this season has been extremely volatile, and one player who represents that perfectly is Steven N’Zonzi. The Frenchman was a colossal figure in the middle of the park when the Andalusians got the better of Manchester United, but hasn’t quite been at his best in the league recently.

If Sevilla are to take anything from the game, N’Zonzi will need to be at his best, stopping the likes of Luis Suarez and Philippe Coutinho before they get around the hosts’ box. With Lionel Messi likely to miss out, his job might just be a tad bit easier.

Barcelona could be missing a number of important players on Saturday, but that should hardly be a deterrent against a Sevilla side that has failed to turn up in La Liga more often than not recently. In Luis Suarez, Philippe Coutinho and Ousmane Dembele, the visitors still have enough quality to get past Vincenzo Montella’s men, if only narrowly.

For the Andalusian side, the frontmen have been very inconsistent, meaning they should pose very little threat to Barcelona. The Hard Tackle, thus, predicts a largely comfortable evening for Ernesto Valverde & co. and win by a two-goal margin.