Portugal will continue their preparation for the 2018 FIFA World Cup when they take on Netherlands at Stade de Geneve on Monday.

The international break moves into its second and final week as certain teams continue to prepare for this summer’s World Cup, while the others pick up their pieces after failing to qualify. On Monday, two heavyweights of European football will clash at Stade de Geneve, when Portugal meet the Netherlands.

Portugal kicked off their commitments in the international break with a fine 2-1 comeback win over Egypt on Friday as Cristiano Ronaldo struck an injury-time brace. Netherlands, on the other hand, were outsmarted by England in a 1-0 loss as Ronald Koeman’s tenure as the manager started on the worst possible note.

The last meeting between the two sides ended all square as Cristiano Ronaldo and Kevin Strootman scored for either side in a 1-1 draw. Ahead of their latest meeting, The Hard Tackle takes a closer look at the encounter.

No player picked up any injury scare in the win over Egypt on Friday, meaning Fernando Santos still has a full-strength squad at his disposal. But, the Portugal boss should rotate some of his players as he looks to identify his strongest lineup heading into the World Cup.

With that in mind, Rui Patricio could be the first name to appear on the team sheet announced on Monday, with Santos preferring Beto in the previous game. The other changes in defence should see Joao Cancelo start as the right-back and Jose Fonte returning to the heart of the Portugal defence alongside Rolando, who looks nailed on.

Raphael Guerreiro should continue as the left-back as he continues building up his fitness heading into the World Cup. In midfield, William Carvalho and Bruno Fernandes could get the opportunity to impress the manager following a positive outing for Joao Moutinho and Ruben Neves last time out.

The duo will be tasked with transitioning the play quickly from defence to attack, with Bruno Fernandes the more advanced of the two. In attack, Ricardo Quaresma is likely to start after his game-changing cameo against Egypt, with Gelson Martins expected to line up on the right flank.

Upfront, Andre Silva wasn’t quite impressive against Egypt, meaning Goncalo Guedes could get the chance to start alongside Cristiano Ronaldo in the strike partnership, with the La Liga duo looking to use their deceptive change of pace to get in behind the centre-backs.

Ronald Koeman’s first match in charge of Netherlands didn’t go as planned, but there were certainly some positive signs. To begin with, no player went off injured, meaning the manager has his entire squad at his disposal this week.

Jeroen Zoet was a surprise starter for the Dutch last time out as Koeman left Jasper Cillessen out. On Monday though, the Barcelona goalkeeper should start between the sticks. In front of him, the back-three of Matthijs de Ligt, Stefan De Vrij and Virgil van Dijk looks nailed on and should start again.

But, there might be a few rotations ahead of the defensive line, with Kenny Tete likely to start as the right wing-back in place of Hans Hateboer. Patrick van Aanholt though, should retain his place as the left wing-back, with Kevin Strootman and Georginio Wijnaldum continuing in the middle.

Upfront, Memphis Depay has become the talisman for this Dutch side, and he will be expected to provide the pace and trickery from the left flank, drifting in and looking for scoring opportunities. Quincy Promes should start again too, but Wout Weghorst could start as the focal point of attack, with Bas Dost being unimpressive against England. 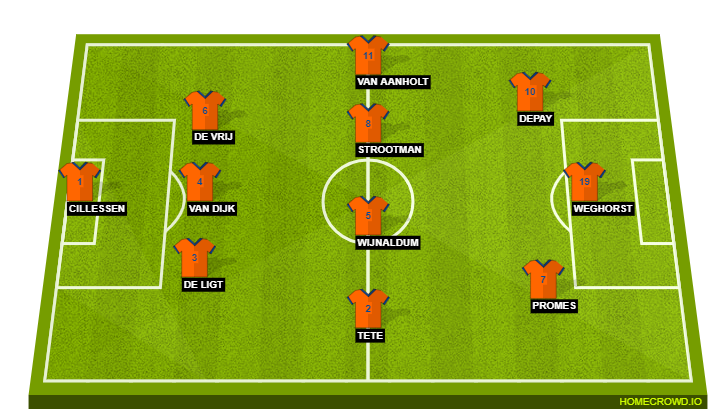 The Koeman era has begun in Dutch football, and the captaincy in his reign has been handed to Virgil van Dijk following Arjen Robben’s retirement. It is clearly evident what effect the 26-year-old has had at Liverpool, using his leadership abilities to organise a vulnerable backline to a great extent.

Leading a largely inexperienced side, the player now needs to do much more than just keep the defence disciplined. Van Dijk also has to rally the entire group together to rise up from the tumultuous rebuilding phase Netherlands find themselves in. A strong showing against Cristiano Ronaldo & co. will go a long way in ensuring just that.

Two sides that come into the game with contrasting fortunes. The Netherlands have a rebuild phase ahead of them as they miss the World Cup, and will use this game to continue on that path. Portugal, on the other hand, have Fernando Santos aiming to identify his best team from an experienced group ahead of the summer’s tournament.

Ronald Koeman’s men seem to lack the teeth in attack to trouble the Portuguese defence much, and will largely depend on Memphis Depay. Portugal, on the other hand, have different elements in attack, although they are still lacking in end product to an extent. The Seleccao edge Holland narrowly, and we predict a 2-1 win for Fernando Santos & co.