The 2018 FIFA World Cup is mere months away, and the latest batch of international fixtures provide all the qualified teams a chance to finalise their preparations for the tournament. In Dusseldorf, Germany will look to test their mettle against fellow favourites for Russia 2018, Spain as the two sides meet at the ESPRIT Arena.

Germany have been on a tear over the last two years, with no loss in their last 21 games, which also includes the Confederations Cup triumph in 2017. Joachim Low’s men are the favourites for the World Cup, having qualified from their group with a perfect qualifying record from their ten games.

Spain, on the other hand, are not far behind, having embarked on a resurgence under Julen Lopetegui in the post-Vicente del Bosque era. La Furia are unbeaten under their current boss, having won 12 of the 16 games during his reign and qualified for the World Cup as the winners of their group.

The two sides last met in a friendly in 2014, with Germany running out narrow 1-0 victors thanks to a late Toni Kroos goal. Ahead of their latest encounter on Friday, The Hard Tackle takes a closer look at the encounter.

Joachim Low has picked a massive 26-man squad for the latest round of international fixtures, with some high profile absentees. Manuel Neuer is the only big name player missing through injury as he nears his return from a long-term foot injury.

In his stead, Barcelona number one Marc-Andre ter Stegen is likely to be deployed between the sticks. In front of him, Joshua Kimmich should be the right-back, with Jonas Hector on the opposite flank as he makes his return to the fold for the first time in nine months, having missed the last four games due to an ankle injury.

At the heart of the Germany defence, Low has a problem of plenty, with Mats Hummels, Jerome Boateng likely to be the first-choice central defensive partnership. The duo will be challenged by the likes of Niklas Sule, Matthias Ginter and Antonio Rudiger.

The same problem is pertinent in midfield and attack as well, but Toni Kroos and Sami Khedira should get the nod in the middle. Thomas Muller has taken over the captaincy since Bastian Schweinsteiger’s retirement, and he should reprise a similar role as he does for Bayern Munich.

Mesut Ozil will pull the strings for Germany, with Leroy Sane likely to start on the left flank. The striker’s spot is likely to be a toss up between Timo Werner and Mario Gomez, with the former likely to get the nod as he is expected to be the first-choice at the World Cup.

Like with Germany, there are several big name players missing from Julen Lopetegui’s squad, with the Spain boss looking to reward those who have been performing consistently. As a result, the likes of Cesc Fabregas, Alvaro Morata, Pedro and others have missed out. Sergio Busquets is the major absentee due to a toe injury.

The likes of Marcos Alonso, Dani Parejo and Rodri are in contention to make their international debuts. For this match though, Lopetegui is likely to stick with more of his first-choice players, starting with David De Gea in goal.

Dani Carvajal, Sergio Ramos, Gerard Pique and Jordi Alba should make the numbers at the back, with Saul Niguez likely to fill in for the injured Busquets. Alongside the Atletico Madrid man, should be veteran midfielder Andres Iniesta and Isco, who’s often been the go-to man for Lopetegui.

Upfront, David Silva is another player who has flourished under the current Spain manager, and he should start in a role that he has largely reprised for the national side – on the right wing. Marco Asensio is likely to be on the opposite flank, with comeback man Diego Costa starting as the focal point of attack. 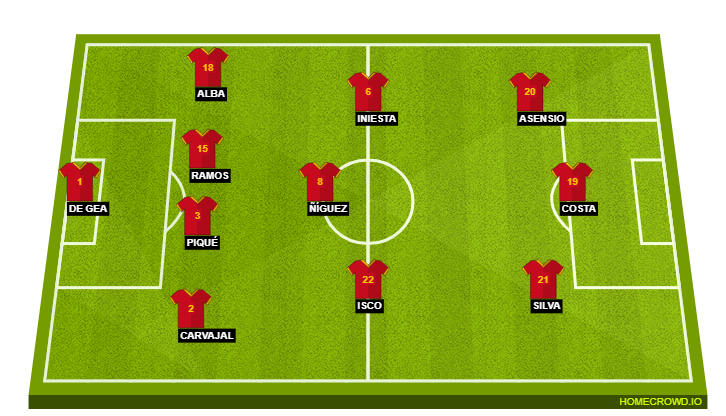 Back in the fold and pumped up. (Photo courtesy – David Ramos/Getty Images)

Things are finally looking up for Diego Costa, who looks highly motivated during his second coming at Atletico Madrid. Back into the Spanish National Side after nearly one year, the 29-year-old has the motivation to grab this opportunity with both hands in order to book his ticket for Russia.

A strong performance against the defending world champions will go a long way in doing just that. His aggression will come in handy for La Furia, and his movement could help open up space at the heart of the German defence, which can be pounced upon by the likes of Marco Asensio.

Two sides who are the odds-on favourite for the World Cup, will look to clinch bragging rights just months before the finals in Russia, and it should be a match that is likely to be swayed by the battle in midfield, with both sides boasting some of the most creative powerhouses in world football.

The poacher’s instinct isn’t missing either, and this game should have plenty of goals in it, with Diego Costa and Thomas Muller likely to be the key men for the two sides. In the end, there should be very little separating the two sides, which is why we predict a 2-2 draw on Friday.