The second edition of the China Cup begins this week, with four teams vying for the latest international tournament in world football. On Friday, Uruguay and Czech Republic will play in the competition for the first time when they take on each other in the semi-finals at the Guangxi Sports Center Stadium.

Uruguay’s recent results aren’t too promising, with the South Americans winning just two of their last six matches. But, Oscar Tabarez’s men have qualified for the summer’s FIFA World Cup, meaning the manager should use this competition to identify his best team for Russia 2018.

Czech Republic, on the other hand, have had completely contrasting fortunes, winning each of their last four games and showcasing some brilliant recent form. But, Karel Jarolim’s men failed to qualify for the World Cup after finishing third in their qualifying group behind Germany and Northern Ireland.

Czech Republic were victorious the last time these two sides faced off against each other, clinching third place in the 1997 Confederations Cup in the process. Ahead of their latest meeting on Friday, The Hard Tackle takes a closer look at the encounter.

Oscar Tabarez has been able to pick a strong squad for the latest round of international fixtures, with almost every regular member fit and available. The only player missing is Martin Caceres, who pulled out of contention due to a calf injury he sustained against Bologna in Serie A.

In Caceres’ absence, Maxi Pereira is likely to start on the right side of the Uruguay defence, with Gaston Silva the left-back. At the heart of defence, Atletico Madrid duo Jose Gimenez and captain Diego Godin should shore up the backline, with their familiarity with each other enabling a solid defensive output.

In midfield, exciting youngster Lucas Torreira is in line to make his international debut, having impressed massively for Sampdoria in Serie A this season. Fellow Serie A midfielders Matias Vecino and Rodrigo Bentancur are expected to make the numbers in the centre of the park, using their work-rate to help out in defence while also moving the ball forward quickly.

Uruguay’s attack should largely be concentrated down the middle, with resurgent attacker Gaston Ramirez linking up with strikers Luis Suarez and Edinson Cavani upfront, with the in-form Christhian Stuani an option off the bench. The width is likely to be provided by the full-backs, who should move forward with pace, when required, and whip in pinpoint crosses.

Karel Jarolim has decided to go with a healthy mix of youth and experience with his latest squad for the international fixtures. Veteran defender Marek Suchy will lead the side, and line up at the heart of the Czech Republic defence, with Tomas Kalas likely to be his partner.

There might be a few rotations in order in the tournament though, with Jarolim likely to set a base for the future, with the preparations for Euro 2020 beginning from here. As a result, Pavel Kaderabek should start as the right-back in place of the veteran Theodor Gebre Selassie, with Jan Boril the left-back.

A midfield pivot is likely to be deployed by Jarolim, with Tomas Soucek and the team’s talisman Vladimir Darida lining up alongside each other. The attack should have Jan Kopic and Jakub Jankto in the wide areas.

The spotlight though, will be on talented youngster Antonin Barak, who has started his international career with a bang – five goals in seven outings. Michael Krmencik and Patrik Schick should vie for the striker’s spot, with the latter likely to get the nod here. 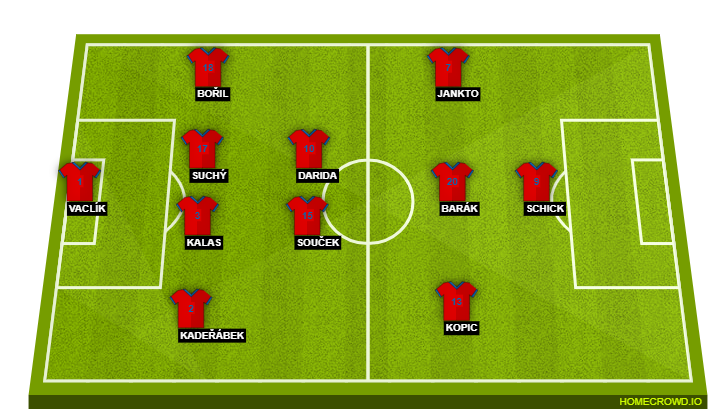 Sampdoria have surprised one and all by showing European aspirations this season, and while it has largely been a team effort, there have been a few standouts. One such player is young midfielder Lucas Torreira.

Holding fort in the middle of the park, the 22-year-old has held the fort in front of the backline with aplomb, while setting the base for his side’s attacking pursuit. Primed for his international bow on Friday, he will need to do more of the same for Uruguay, providing steel in front of a backline that has been slightly vulnerable in recent games.

By the time Uruguay and Czech Republic face off, they will already know one of the China Cup finalists. On Friday, the match should largely be a battle in the middle, where Uruguay’s superiority will come to the fore. The in-form duo of Luis Suarez and Edinson Cavani give the South Americans a distinct edge as well, and we go for a 3-1 win for Oscar Tabarez & co.