It’s Phase 4 of 4 of the UEFA Champions League Round of 16 this week, giving us the final four quarter-finalists. At Old Trafford on Tuesday, Manchester United will play hosts to Sevilla in their second leg fixture, with the tie hanging in the balance after the first leg three weeks ago.

Manchester United have turned their form around and how, since the first leg in Seville. The Red Devils have won each of their three league games, each of those being by a slim one-goal margin that has been a fine showcase of their trademark grit and character, and left them five points clear on second place on the table.

Sevilla, on the other hand, have had a mixed run of form in the four games post the first leg tie. Vincenzo Montella’s men have won two and lost as many games in the last three weeks – a sequence of results that has left them lagging well behind in the race to finish inside the top four.

The first leg at the Ramon Sanchez Pizjuan Stadium, as iterated earlier, ended in a goalless draw that had very little quality. Ahead of their latest meeting on Tuesday, The Hard Tackle takes a closer look at the encounter.

Jose Mourinho’s injury problems seem to be improving, if only just, ahead of Sevilla’s visit. On Tuesday, the Manchester United boss will be able to welcome one player back from the sidelines, although he can still be without as many as six first-team players.

The players who are certain to miss the tie are Ander Herrera (hamstring), Marcos Rojo (knock), Phil Jones (knock), Daley Blind (ankle) and Zlatan Ibrahimovic, although the Swede has returned to training. Paul Pogba’s availability is doubtful, with the Frenchman not training much since sustaining a knock in training last weekend.

Pogba is likely to face a late fitness test to determine his availability, and he will likely start on the bench, at best. But, Anthony Martial is set to return to the matchday squad after spending a week on the sidelines due to a thigh injury.

But, the Frenchman is likely to have to bide his time on the bench to begin with, with Marcus Rashford making a case for a start following his match-winning brace against Liverpool. Another key decision for Mourinho will be regarding the inclusion of an additional midfielder or go attack heavy, like on the weekend.

Considering his side’s smart performance on Saturday, Mourinho is likely to go with three attacking men behind Romelu Lukaku, with Jesse Lingard expected to come into the side in place of Juan Mata. Marouane Fellaini should be the option off the bench once again.

Vincenzo Montella does not have a lot of pressing injury concerns hampering his preparations for the crunch Champions League tie. On Tuesday, the Sevilla boss will only be without three first-team players in the worst case scenarios.

Jesus Navas (calf), Lionel Carole (muscle injury) and Sebastien Corchia (groin) are all doubtful for the game, with Corchia the likeliest candidate to make the matchday squad, having trained the most out of the three.

Navas was one of the best performers for Sevilla in the first leg from the right-back spot, and Daniel Carrico is likely to be the makeshift right-back in his absence with Miguel Layun ineligible to feature. The rest of the defensive unit should stay the same, with the onus on Clement Lenglet, to marshall the back-four.

Steven N’Zonzi and Ever Banega should line up in midfield, with the latter taking up a more creative role and the former being the defensive shield to the back-four. Banega’s set-piece delivery will also pose a major threat to Manchester United, who have been suspect against aerial attacks of late.

Pablo Sarabia and Joaquin Correa will be the key men in the wide areas, providing a burst of pace to unsettle the Manchester United full-backs. Luis Muriel’s strength and power will also come in handy, apart from his abilities in front of goal. 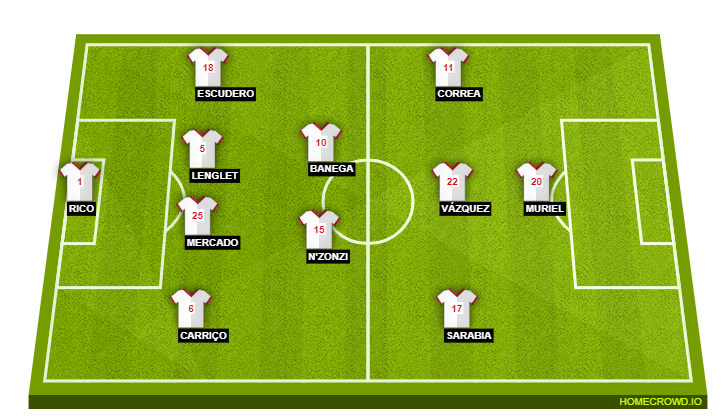 Against a Manchester United attack that is beginning to rediscover its early season fluency, Sevilla will have to nip the bud during build-up play, making Steven N’Zonzi’s job the most crucial one. The French midfielder has been a revelation for the Andalucian side, screening the back-four remarkably.

On Tuesday, he will not just have his personal battle with Alexis Sanchez to worry about, with Scott McTominay a vital cog for the hosts. If N’Zonzi uses his physical presence to good effect, he can go a long way in stifling the Manchester United attack, thereby enabling Sevilla to grab their first win in England.

A tie that is hanging in the balance, all three results will be possible when Manchester United host Sevilla. Having said that, the La Liga outfit has never quite managed to crack the code of winning in England as well as the Round of 16 in the UEFA Champions League.

Can they break the jinx? Their goalscoring record does help their case, but their shoddy defence equally worsens their chances. With Manchester United holding the aces on the defensive front, they only just tip the scales in their favour, which is why The Hard Tackle predicts a narrow 2-1 win for Jose Mourinho & co.