The UEFA Champions League returns this week as the first batch of the second leg ties of the Round of 16 commences on Tuesday. At Anfield, Liverpool will be aiming to confirm the inevitable and clinch a place in the quarter-finals when Porto come visiting for their second leg.

Liverpool have completely turned their form after a minor blip towards the end of January, and have won five of their last six games in all competitions, with the other game ending in a draw. In Europe, the Reds have been the most prolific side, having scored a staggering 28 goals in seven games thus far.

Porto, on the other hand, are unbeaten in league competition this season, and are leading the Liga NOS standings by five points. Their form in Europe has been erratic though, winning three and losing three, while scoring as many goals that they have conceded — fifteen in total.

The first leg, played last month at the Dragao, saw Liverpool thump Porto 5-0 as Sadio Mane led the way with a hat-trick, with goals from Mohamed Salah and Roberto Firmino as well. Ahead of the second leg tie on Tuesday, The Hard Tackle takes a closer look at the encounter.

Jurgen Klopp does not have many pressing injury concerns to deal with ahead of the visit of Porto. On Tuesday, the Liverpool boss is only likely to be without as many as three first-team players, with only one being a regular within his first-team setup.

Nathaniel Clyne will definitely miss the tie as he continues building up his fitness following a long-term absence due to a back injury. The availability of Georginio Wijnaldum and Ben Woodburn is doubtful though, with the duo still recovering from their respective illnesses.

Meanwhile, Klopp is expected to ring in the changes with one eye on the clutch Premier League meeting with Manchester United on the weekend even though he has insisted on the opposite. But, he would still be willing to inflict some more damage on Porto, meaning the likes of Mohamed Salah, Alex Oxlade-Chamberlain and Emre Can should start.

There should be chances afforded to the likes of Adam Lallana, Dominic Solanke and Ragnar Klavan. There might be a change in personnel between the sticks as well, with Simon Mignolet coming into the side in place of Loris Karius. Regardless of the changes though, Liverpool should continue their high intensity style of play, with Salah the focal point of attack.

Sergio Conceicao, unlike Klopp, has several important members of his squad on the sidelines ahead of the trip to Anfield. The Porto boss has travelled to Liverpool without five key first-team players, who are suffering from various injuries.

The likes of Alex Telles (knee), Ricardo Pereira (thigh), Danilo Pereira (calf), Moussa Marega (hamstring) and Tiquinho (thigh) are all on the treatment table, providing Conceicao problems all across the park.

In the absence of Telles, Ivan Marcano is likely to be deployed as a makeshift left-back, with Diego Reyes expected to line up at the heart of the Porto defence alongside Felipe, who is available again after serving a one-match ban in the first leg.

Maxi Pereira should be the right-back, with Iker Casillas expected to start in goal with Porto confirming that this will be the veteran goalkeeper’s last season at the club. In midfield, captain Hector Herrera will hold the fort in front of the backline, with Oliver Torres and Andre Andre the driving forces for the visitors.

The major return would be in attack, with Vincent Aboubakar finally fit and available. The Cameroonian striker should lead the line for the Portuguese outfit, with Yacine Brahimi and Jesus Corona providing a pacy outlet on the wings. 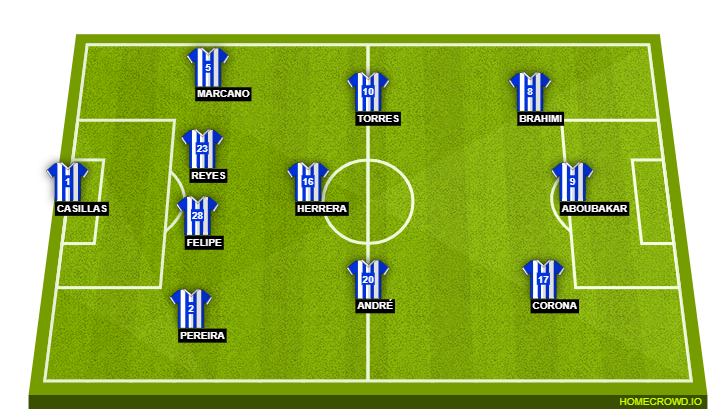 With progression into the quarter-finals all but confirmed, Liverpool manager Jurgen Klopp is likely to provide starts to a few players who have found first-team minutes hard to come by lately. One such player is Adam Lallana, who has had a season to forget so far thanks to a long injury layoff.

If he starts on Tuesday though, the Englishman will get a big opportunity to claw his way back into the scheme of things and go about becoming a regular again. With Liverpool expected to invest in a midfielder in the summer, this is just the time for Lallana to show his worth to his manager once again.

Liverpool simply blew Porto away in the first leg, which means that a place in the quarter-finals is now but a mere formality. Sergio Conceicao & co. though, will be smarting from that thrashing, and will look to make a statement on their way out of the Champions League.

But, with at least one of the formidable front trio expected to start, and the others to follow from the bench, if need be, the Reds should have enough quality in their ranks to see off the visitors. The Hard Tackle predicts a keenly contested affair, with Jurgen Klopp & co. prevailing by the odd goal.