Arsenal travel to the Amex Stadium to visit in-form Brighton as the Gunners try to avoid a tenth defeat of the Premier League season and get back to winning ways.

A top four place looks like a distant dream for the Gunners who suffered back to back defeats at the hands of Manchester City in the same week, with the loss on Wednesday their 9th in the league this season. Arsene Wenger is likely to switch his complete attention to their Europa League campaign to get back into the Champions League.

Arsenal have had a miserable time on the road this season, with seven losses to boot. Their away form has been the catalyst in the ten-point gap to the nearest top four team. Wenger will be hoping for a positive response following two catastrophic results in the last seven days.

Brighton, on the other hand, come into this game on the back of an impressive 4-1 win over Swansea in the last round of fixtures. Manager Chris Hughton, however, would be wary of a wounded Gunners side ahead of their clash and hopefully would want a result in the game.

Chris Hughton would be in confident mood ahead of this clash, as he has a near complete squad ahead of the clash with Arsenal. Brighton have no fresh injury concerns and thus, will have a team free of any injury or suspensions.

Those facts indicate Hughton would be fielding the same squad that dismantled Swansea last weekend. Steve Sidwell remains the only long-term absentee for Brighton, having been out with an ankle injury. 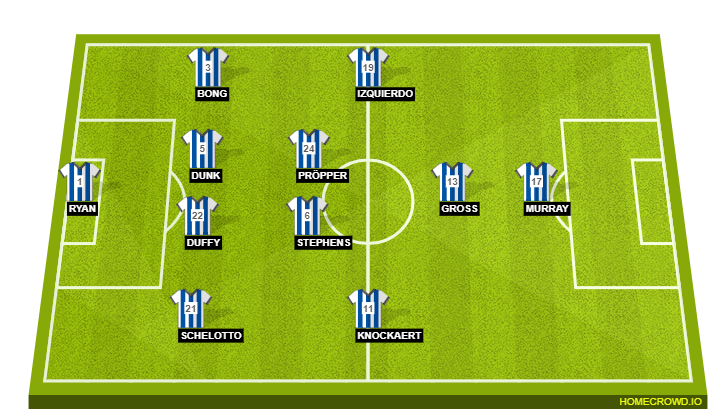 In a total contrast to Brighton’s situation, Arsene Wenger’s side have a few injury concerns, especially to critical men in defence and attack.  Alexandre Lacazette has been out since early February and is likely to miss the majority of March with a knee injury.

The other absentees are Nacho Monreal and Jack Wilshere. Wilshere missed the heavy defeat against Manchester City with a minor ankle injury and is likely to miss this trip to Brighton. Nacho Monreal injured himself in the Carabao Cup final loss to Manchester City and is expected to be out for some more time.

Otherwise, Arsene Wenger will have an eye on the Europa League clash against AC Milan and is likely to make some changes to face Brighton.

It has been a difficult few days for Arsenal, who are not used to being defeated three games in a row. Mesut Ozil, in particular, has been the centre of criticism by pundits and experts alike in the last few days. The German has had a mixed bag season so far and was singled out for his lack of productivity in the Manchester City clashes.

Arsenal might have been struggling of late, but have an excellent record against newly promoted teams in the Premier League and haven’t lost to such a side since 2012. Arsene Wenger though, will be looking for a positive response to the massive criticism and defeats they have endured in the last few days.

Brighton would represent an excellent opportunity for Arsenal to get back on track, and in typical circumstances, Wenger’s side does respond to such situations, especially against bottom half teams. Chris Hughton’s side could be fortunate to score a goal or so against the beleaguered Gunners defence, but Arsenal’s quality in attack would prevail to win this game.