The top two in La Liga meet on Sunday as Barcelona host Atletico Madrid at Camp Nou, with the stakes in the title race higher than ever before.

The title race in La Liga is set to take a definitive turn on Sunday when the top two sides face off.  Barcelona welcome a resurgent Atletico Madrid to Camp Nou, with only five points separating two sides that boast the best defensive units in the Spanish top flight.

Barcelona have been largely imperious this season, particularly in La Liga, where they are yet to lose a game so far. After 26 rounds, the Blaugrana have dropped points just six times, although their last game saw Ernesto Valverde’s men produce a tame performance as they were held to a 1-1 draw by Las Palmas.

Atletico Madrid, on the other hand, have been spectacular over the last five weeks, coming into the game on the back of an eight-game winning run. The run of results has also seen Diego Simeone’s men cut the gap on the league leaders to five points, and a win on Sunday would throw the title race wide open.

The reverse fixture, played back in October at the Wanda Metropolitano, saw Barcelona come from behind to hold Atletico Madrid to a 1-1 draw. Ahead of their latest meeting on Sunday, The Hard Tackle takes a closer look at the encounter.

Ernesto Valverde has a near-full strength squad to pick from ahead of the visit of Atletico Madrid, with just one player unavailable. Nelson Semedo is on the treatment table with a hamstring injury that should keep him sidelined for another five weeks.

In the absence of the Portuguese defender, Sergi Roberto should start as the right-back once again. Gerard Pique received a well earned rest in the midweek league game, and should shore up the heart of the Barcelona defence alongside Samuel Umtiti. Jordi Alba should be the left-back, having served his one-match ban.

Meanwhile, Valverde could take a major tactical decision to shift his formation from a 4-4-2 to a 4-3-3, mainly to create overloads in midfield, but also considering a few personnel issues. As a result, Paulinho and Ousmane Dembele are likely to miss out.

Andres Iniesta will be the creative force in midfield, with the enterprising Ivan Rakitic key in winning possession back higher up the pitch. Sergio Busquets, as always, will be the anchorman, stifling the opposition’s attacking plays before initiating the attacks for his own side.

Upfront, Lionel Messi and Luis Suarez are likely to have Philippe Coutinho for company, with the Brazilian starting to link up smartly with the duo. Suarez, in particular, will be crucial in putting the pressure on the Atletico Madrid defenders, especially with his off-the-ball movement and tenacity.

Diego Simeone, like Valverde, does not have many pressing injury concerns to deal with ahead of the trip to Camp Nou. On Sunday, the Atletico Madrid boss will be without just two first-team players, with Lucas Hernandez and Stefan Savic (both thigh) on the sidelines with their respective problems.

The duo’s absence means Jose Gimenez and Diego Godin should start at the heart of the Atletico Madrid defence once again. Filipe Luis and Sime Vrsaljko should be the full-backs, and the duo will have a personal battle against their counterparts on their respective flanks, looking to peg the Barcelona wide men back.

In midfield, Thomas Partey and Gabi should start to create a partnership that will look to kill off the half spaces to deny Iniesta and Messi’s creative abilities. Koke and Saul Niguez are likely to start in the wide areas, although they are likely to occupy central positions at times to counter Barcelona in the middle and create overloads.

Upfront, the in-form Antoine Griezmann will be partnered by Diego Costa, with the latter adding some much needed teeth that should help the Frenchman to advance forward deceptively. Costa will also look to pull Gerard Pique and Samuel Umtiti wide, which should again benefit Griezmann on his forward forays. 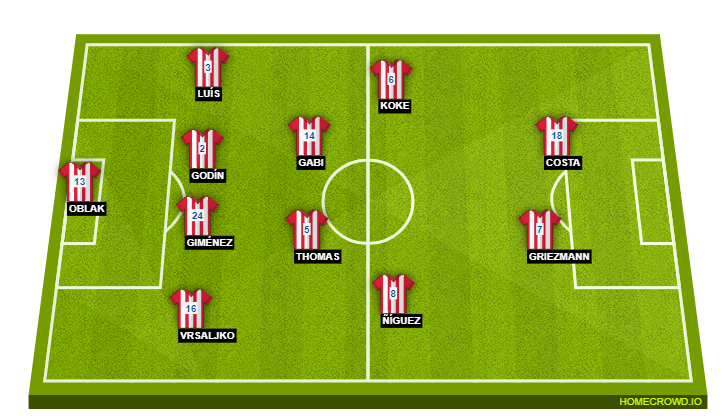 The smile is back, and so is the red hot form. (Photo courtesy – Pierre-Philippe Marcou/AFP/Getty Images)

Diego Costa’s return to the Spanish capital seems to have brought the best out of Antoine Griezmann, who had looked out of sorts in the first half of the season. With the duo striking a menacing partnership, Atletico Madrid have become a prolific outfit, with the Frenchman himself enjoying a purple patch.

With seven goals in his last two league games, Griezmann is well and truly back, and should be tipped to find the back of the net on Sunday as well. If he continues his fine run of form, one can certainly expect Atletico Madrid to get the crucial three points and cut the gap on the league leaders.

With just 12 rounds left in the season, a top of the table six-pointer is upon us. Both sides know that a win for them will change the face of the title race dramatically, which is why this should be a no holds barred contest that is likely to be largely determined by the battle in midfield.

Another key factor is the respective forms of Lionel Messi and Antoine Griezmann and the duo, along with their strike partners should prove to be major factors. In the end, both sides are quite evenly matched and the game is likely to end all square. The Hard Tackle predicts a 1-1 draw on Sunday.