Gameweek 27 of the Serie A will perhaps be the game changer in the race for the title and the European places, with several high stakes encounter scheduled to be played. One such fixture will feature the third and second-placed sides against each other as Lazio and Juventus face off at the Stadio Olimpico.

Lazio seem to have found some form after a five-game winless run that ended in mid-February, having not lost any of their last four games. But, the Biancocelesti will be smarting from their Coppa Italia ouster on Wednesday at the hands of AC Milan as they prepare to face Juventus, who made the final too.

Juventus, on the other hand, have not lost a single game since November – a run that now stretches to 19 games. As iterated already, the Bianconeri come into the game on the back of their progression to the TIM Cup final, although a tricky Champions League trip to Tottenham beckons after the Lazio game.

The reverse fixture, played back in October at the Allianz Stadium, saw Lazio come from a goal down to get the better of the defending champions, thanks to a brace from Ciro Immobile. Ahead of their latest meeting on Saturday, The Hard Tackle takes a closer look at the encounter.

Simone Inzaghi does not have many pressing roster problems to deal with ahead of the visit of Juventus. On Saturday, the Lazio boss will be without three first-team players due to injuries and suspension.

Among those who are set to miss out, Adam Marusic will be the only absentee posing a concern, with the defender suspended after being sent off against Sassuolo last weekend. Youngsters Pedro Neto and Bruno Jordao are also unavailable as they struggle with their respective injuries.

In Marusic’s absence, meanwhile, Patric is likely to deputise as the right wing-back, with Senad Lulic the left wing-back. At the back, the responsibility of stifling the Juventus attack will fall on the trio of Wallace, Stefan De Vrij and Stefan Radu, with Lucas Leiva in front of them looking to absorb the pressure in midfield.

Speaking of the midfield, Marco Parolo and Sergej Milinkovic-Savic will be the driving forces for the hosts, linking up with the attack. Upfront, Luis Alberto and star striker Ciro Immobile will be the danger men providing the firepower. 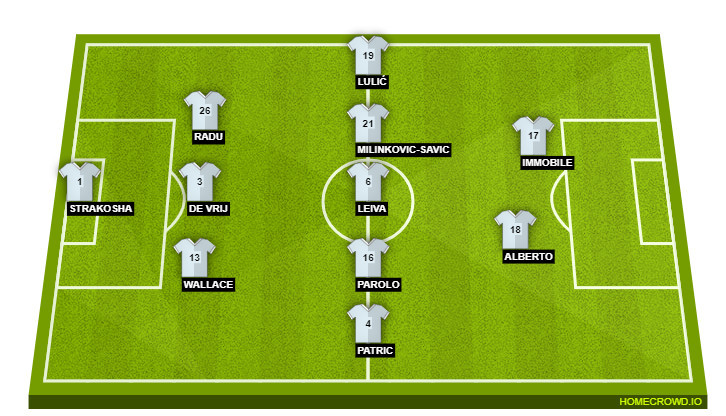 Massimiliano Allegri, too, has a few injury concerns on his hands before taking the trip to Stadio Olimpico. On Saturday, the Juventus boss will be travelling without as many as four key first-team players due to their respective fitness problems.

The players who are definitely sidelined are Mattia De Sciglio (thigh), Juan Cuadrado (hip) and Federico Bernardeschi (knee), with each of them expected to return later this month. There are doubts over the availability of Gonzalo Higuain, who hasn’t trained much this week, and is likely to be saved for the Tottenham game.

In the Argentine’s absence, Mario Mandzukic is expected to start as the focal point of attack once again. Douglas Costa is set to start as well, with Paulo Dybala likely to return to the starting lineup as he continues to claw his way back from a hamstring injury.

Dybala and Costa will share the creative burden, with Mandzukic looking to drop deep to catch the Lazio defenders off guard. In midfield, Sami Khedira is likely to return to add more steel against the dangerous Lazio midfielders, with Blaise Matuidi the powerhouse all-action player looking to create an impact on both ends of the pitch.

The game on Saturday is likely to be down to the slimmest of margins, which means the midfield battle will hold all the more importance for both sides. As far as Lazio are concerned, their driving force will be the in-form Sergej Milinkovic-Savic, who will look to peg back the visitors and initiate the attacks for his side.

With the eyes of some of the best clubs in the world on him, a game changing performance against the champions might just go a long way in further ascending his star. In the near future though, Simone Inzaghi will look towards his man to make the difference for the hosts.

Second meets third in Serie A on Saturday and the stakes couldn’t be any higher for either side. Any slip up can prove to be costly as far as their respective league aspirations are concerned, which is why this should be a fiery battle.

Lazio seem to have Juventus’ number recently, and they should pose a major threat once again on Saturday. The goals have not been coming fluently for Allegri & co. and the absence of Gonzalo Higuain could be decisive. The Hard Tackle predicts another big win for Lazio, who should prevail with a 2-1 scoreline.