The penultimate stage of the Coppa Italia culminates on Wednesday, when the second legs of both the semi-finals are played out. At the Allianz Stadium, Juventus will be aiming to qualify for the final for the fourth successive season when they play hosts to Atalanta.

The Bianconeri have been on an unbeaten run for over three months now, with their last loss coming way back in November. Massimiliano Allegri’s men have been fantastic in the Coppa Italia as well, with no side managing to find the back of the net against them thus far.

Atalanta, on the other hand, have only managed to win one game this month – a slender 1-0 success over Chievo, with the four subsequent matches either ending in a draw or a loss. In the Coppa Italia, Gian Piero Gasperini’s side lost their first game of the competition in the first leg and will need to overturn the deficit to advance to the final.

The aforementioned first leg, played last month, ended in a 1-0 win for Juventus, with Gonzalo Higuain’s third minute strike the difference between the two sides. Ahead of their latest meeting on Wednesday, The Hard Tackle takes a closer look at the encounter.

Massimiliano Allegri has both good and bad news on the injury front ahead of the visit of Atalanta. On Wednesday, the Juventus boss will be without three key first-team players, although one other has returned to provide him a shot in the arm ahead of the tie.

Mattia De Sciglio (thigh), Juan Cuadrado (hip) and Federico Bernardeschi (knee) are on the treatment table and will definitely miss the game. But, Gonzalo Higuain has recovered from an ankle injury to make himself available for Wednesday, although he is only fit enough to make the bench.

With the Argentine still not ready to start, Mario Mandzukic should lead the line for the hosts, a role he hasn’t been accustomed to at Juventus so far. Behind the Croat, should be Douglas Costa and a the fit again Paulo Dybala, with the duo looking to provide the creative touch in the final third.

Miralem Pjanic will also provide a burst of creativity, albeit from a deep lying position, with Blaise Matuidi the workhorse in midfield. At the back, Medhi Benatia and Giorgio Chiellini should line up at the heart of the Juventus defence, providing cover for Gianluigi Buffon.

The width in attack will be provided by the full-backs, Stephan Lichtsteiner and Alex Sandro, with Dybala and Costa largely looking to stay narrow and cut in to create overloads in and around the box.

Gian Piero Gasperini has no fresh fitness problems to contend with ahead of the trip to Juventus. At the Allianz Stadium on Wednesday, the Atalanta boss will be without just one first-team player, with Luca Rizzo struggling with a knee injury.

Meanwhile, Gasperini should instruct his side to sit deep in defence, putting men behind the ball as the back-three as well as the midfield line, including the wing-backs create organised banks to absorb the pressure from the Juventus attack.

La Dea will also look to build their offensive plays from the back, with each of the centre-backs possessing an eye for a pass. And at the head of the build-up is where Gasperini’s “organised chaos” comes into motion, with the central midfielders fluidly exchanging places with those in front of them.

The key men for the visitors will be Alejandro Gomez and Josip Ilicic, who will look to stretch the Juventus defence by going out wide before creating the chances with the full-backs easing the pressure off them by creating overloads on the flanks, while Bryan Cristante will be the creative head for Atalanta. 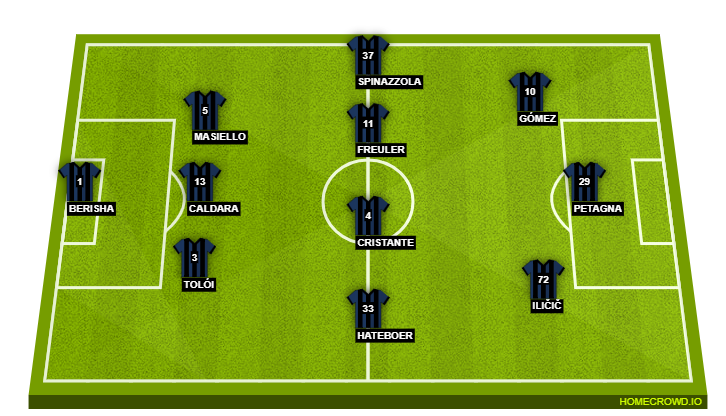 The talisman for La Dea, Papu Gomez has been nothing short of a revelation under Gian Piero Gasperini, having been a force of nature in attack. The Argentine will look to use his diminutive frame to good, deceptive effect, creating the bulk of the chances for his side from the left flank.

His close control will be crucial to keep the Juventus defenders second guessing themselves, and it is safe to say that Gomez’s showing will go a long way in determining the outcome of the game for Atalanta.

Massimiliano Allegri has already confirmed that his side will go all out in the Coppa Italia to create history later on in the campaign, should they progress to the final. So, one can be sure that Juventus will come out all guns blazing on Wednesday to put the tie to bed.

Gonzalo Higuain’s presence on the bench will also be a big boost to the Bianconeri, although the Atalanta defence will be a tough nut to crack. Nevertheless, the hosts should have enough quality to prevail in the second leg, though Alejandro Gomez & co. might just have a say in things. We predict a one-goal win for Juve.