Premier League action continues with Gameweek 28 this weekend and on Sunday, there will be repercussions on both ends of the table. Crystal Palace welcome a Tottenham side that is flying high in the Premier League, knowing full well that they themselves can ill afford any slip ups at the moment.

A run of four games without a win has undone all the good work that had preceded in the four months preceding it. The Eagles are now looking over their shoulders, with Southampton just a point behind them on 18th place on the table.

Tottenham, on the other hand, are unbeaten in all competitions in 2018, although a few unnecessary stalemates are starting to pile up their fixtures. In the Premier League, they are fifth with 52 points, on the cusp of a place in the top four, with second place within touching distance as well.

The reverse fixture, played back in November at Wembley, saw Tottenham scrape through with a 1-0 win thanks to Son Heung-min’s goal midway through the second half. Ahead of their latest meeting on Sunday, The Hard Tackle takes a closer look at the encounter.

Roy Hodgson has a full-blown injury crisis on his hands ahead of the visit of Tottenham. The Crystal Palace boss has an entire side’s worth of players, and some, sidelined and he could be without as many as 12 first-team members on Sunday.

In the absence of so many stalwarts, Hodgson really is down to his barebones as he goes about picking a competitive side for Sunday’s game. Midfield will, thus, hold key for Palace, where Luka Milivojevic will look to stifle the flowing Tottenham attack, aiming to cut down the supply from Mousa Dembele.

The attacking impetus will be provided by Andros Townsend, while new boy Alexander Sorloth will look to provide support to Christian Benteke. At the back, Manchester United loanee Timothy Fosu-Mensah is likely to line up alongside James Tomkins. 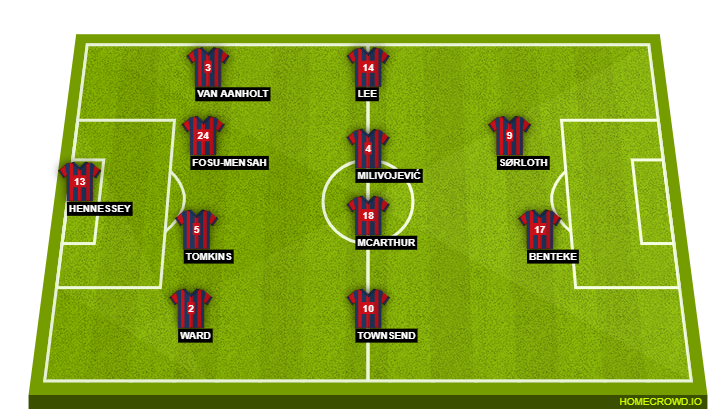 While Hodgson has a plethora of players unavailable, Mauricio Pochettino has no such problems ahead of the cross-London trip to Selhurst Park. The Tottenham boss has no player left on the treatment table, although he doesn’t really have a fully fit squad, yet.

Thanks to their respective situations, the likes of Toby Alderweireld, Danny Rose and Lucas Moura will have their fitness assessed ahead of the game to determine their availability. The latter though, will be hoping to receive his first Premier League start after impressing against Rochdale last weekend.

Meanwhile, the ball will be in Tottenham’s court to grab the game by the scruff of its neck considering Palace will be a heavily depleted side on Sunday. Pochettino is, thus, expected to task his side to play its typical brand of free flowing football, with Mousa Dembele and Christian Eriksen dictating play.

Harry Kane and Dele Alli will be the men assuming scoring positions regularly, while Son Heung-min will be the lynch pin in attack. At the back, Davinson Sanchez and Jan Vertonghen will need to be wary of a possible counter attack, with Palace expected to absorb a lot of the pressure and play on the counter.

Looking for some inspiration against his former employers. (Photo courtesy – Steve Welsh/Getty Images)

With Crystal Palace talisman Wilfried Zaha sidelined due to injury, a lot of the responsibility in attack lands on the shoulders of Andros Townsend, who by now is a Premier League veteran of sorts. Often flattering to deceive, now is the perfect time for the Englishman to step up for his side in their hour of desperate need.

In Zaha’s absence, Townsend really is the only Palace player who can provide an electric burst of pace to make the difference in the final third. Against his former side, the motivation might increase manifold to do just that, and lead his side to a shock win.

It really is hard to see past Tottenham on this one. Roy Hodgson has done a marvellous job with Crystal Palace up until now, but as much as he tries to deny it, fact is that the Eagles are a completely different side without Wilfried Zaha, in whose absence they haven’t won a game since September 2016 – 17 long months!

That is unlikely to change on Sunday against a Tottenham side that is flying high in the Premier League at the moment – the only team that is yet to lose in 2018. The Hard Tackle, thus, predicts a comfortable afternoon for Spurs – a 3-0 win for Mauricio Pochettino & co.