Real Madrid will finally have the chance to move up from fourth spot on the La Liga table when they play their game in hand on Wednesday. A struggling Leganes side welcome the defending champions to the Butarque for a derby, looking to spring another surprise on their illustrious visitors.

The hosts’ form has plundered since the turn of the month, going winless in five successive games in all competitions, which has also resulted in their league fortunes slipping. Asier Garitano’s men are placed 13th on the table currently, although a shock win can put them on the cusp of a top ten spot.

Real Madrid, on the other hand, have overseen a turnaround in league form in 2018, having gone unbeaten in their seven games so far, although they would like to avoid the odd draw along the way. Los Blancos are now just a point off third-placed Valencia, and are starting to rediscover their best.

This is the first league meeting between the two sides this season, although they met in the Copa del Rey quarter-finals, where Leganes shocked Real Madrid by progressing on away goals. Ahead of their third meeting this season, The Hard Tackle takes a closer look at the encounter.

Asier Garitano has a few injury concerns to deal with ahead of the visit of Real Madrid. On Wednesday, the Leganes boss could be without as many as four first-team players due to various fitness problems.

Darko Brasanac and Jon Ander Serantes (both shoulder) will certainly miss the game due to their respective injuries. Alexander Szymanowski (muscle problem) and Dos Santos Mauro (ankle) have recovered from their problems, but are likely to face late fitness tests to determine their availability.

Meanwhile, the key man for the hosts will be Gabriel Pires, holding fort in front of the back-four and aiming to stifle the Real Madrid attack. Alongside him in midfield will be Ruben Perez, who will be the creative outlet for Leganes, looking to get into advanced position to set up Claudio Beauvue.

At the back, Martin Mantovani and Ezequiel Munoz are likely to line up at the heart of defence, and will have the unenviable task of keeping an in-form Cristiano Ronaldo quiet, while Joseba Zaldua and Diego Rico will be charged with keeping things tight on the wings. 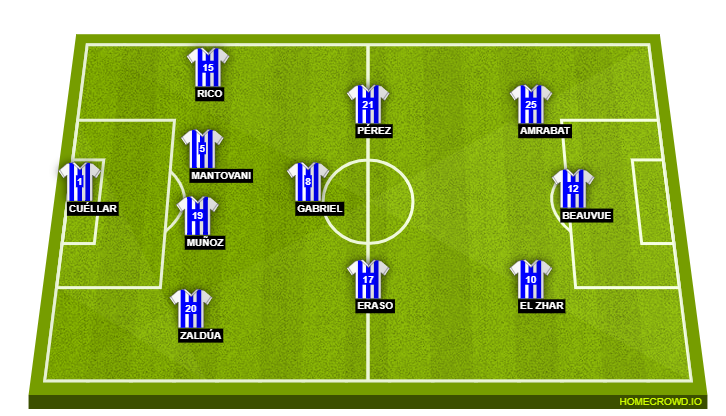 Zinedine Zidane, like Garitano, has several fitness problems on his hands ahead of the short trip to the Butarque. On Wednesday, the Real Madrid boss will be without as many as three first-team players, two of those being key figures.

Marcelo is the latest player on the treatment table, with the Brazilian sustaining a hamstring injury during the 5-3 win over Real Betis over the weekend. The defender has joined Jesus Vallejo (muscle injury) and Toni Kroos (knee) on the sidelines, with the latter also a major absentee.

In Marcelo’s absence, Theo Hernandez will get the opportunity to rack up a few impressive outings under his belt on the left side of defence. Apart from Theo, Zidane is likely to make a few more rotations, bringing back the likes of Luka Modric, Karim Benzema, Raphael Varane and Isco.

Benzema, in particular, will be a key man alongside Cristiano Ronaldo upfront, with the Frenchman looking to get back to top form after scoring for his side on the weekend. Isco, too, seems to be at a crossroads in his Real Madrid career, and he will aim to impress in the absence of Kroos.

Many considered Benzema to be lucky to still be a Real Madrid player after last summer, with Zinedine Zidane preferring to sell Alvaro Morata instead. And the critics have been proven right so far, with the Frenchman failing to look the part so far this season – Benzema has scored just thrice in 17 league appearances.

The veteran striker is clearly at a crossroads in his Real Madrid career, although a strong end to the season could stretch his time at the club. The end looks near for now though, unless he produces some scintillating displays in front of goal, starting against Leganes on Wednesday.

A lot has changes since Leganes shocked Real Madrid in the cup quarters last month. Real Madrid have rediscovered their scoring touch and are the favourites to progress to the Last 8 stage of the Champions League ahead of a high flying PSG side.

Leganes, on the other hand, are going through their worst slump in form this season, and are in search of an inspiration to stop the downward spiral. Real Madrid’s defensive frailties do give them a chance on Wednesday.

But, their own problems at the back means that anything but a Los Blancos win would be a surprise. The Hard Tackle, thus, predict a comfortable 3-1 win for Zinedine Zidane & co.