The second phase of the UEFA Champions League Round of 16 first leg commences on Tuesday with the last four ties set to be played. At the Allianz Arena, Bayern Munich will be aiming to continue their European resurgence under Jupp Heynckes when they play hosts to Besiktas on Tuesday.

The Bavarians have found a stable footing since the appointment of Heynckes, grabbing a staggering 19-point lead over nearest rivals Borussia Dortmund and virtually guaranteed of winning the Bundesliga title. In the Champions League, they finished level on points with PSG after winning their last four group stage games.

Besiktas, on the other hand, are lagging behind in the race to win the Super Lig title, currently on fourth place on the table, five points adrift of leaders Istanbul Basaksehir. In Europe though, the Turkish outfit dominated Group G, going unbeaten in their six games to finish ahead of Porto, RB Leipzig and AS Monaco.

The last meeting between the two sides took place in the 1997-98 Champions League group stage, with Bayern Munich winning 2-0. Ahead of their latest meeting on Tuesday, The Hard Tackle takes a closer look at the encounter.

Jupp Heynckes does not have any pressing injury concern to deal with ahead of the visit of Besiktas. On Tuesday, the Bayern Munich manager will be without just one first-team player, with Manuel Neuer still recovering from his foot injury.

Sven Ulreich, who has been impressive in goal, will continue deputising for the German number one. Heynckes has the luxury of possibly selecting ten new outfield players than those who took the field against Wolfsburg last weekend, although Arjen Robben might be the only one retained in the lineup.

Javi Martinez could continue in the side as well, albeit as a holding midfielder, should the Bayern boss look for more steel in midfield. Upfront, Robben and Kinglsey Coman – available once again after recovering from an illness – will provide the pacy outlet out wide, while James Rodriguez will bring the creative impetus.

Thomas Muller and Robert Lewandowski will aim to bombard the Besiktas box and will the favourites to find the back of the net. At the back, Mats Hummels and Jerome Boateng should shore up the heart of defence, with Joshua Kimmich and David Alaba the full-backs supporting the wingers.

Senol Gunes, unlike Heynckes, has a few fitness problems on his hands ahead of the trip to the Allianz Arena to face Bayern Munich. On Tuesday, the Besiktas boss will be without as many as four first-team players due to various short-to-long-term injuries.

Veli Kavlak (shoulder), Atinc Nukan (knee), Gokhan Tore (knee) and Dusko Tosic (arm) are all sidelined due to their respective fitness problems, and will not be a part of the matchday squad in Munich.

Meanwhile, Gunes is likely to instruct his side to play their natural fluent attacking game, despite the formidable challenge that lies in front of them. Ricardo Quaresma and Ryan Babel will, thus, be the key men for the visitors, countering with pace, with Anderson Talisca setting them free with passes through the middle.

At the back though, veteran defender Pepe will be the instrumental figure, in charge of keeping the back-four organised, with Gary Medel linking up with the Portuguese at the heart of the Besiktas defence. Adriano and Gokhan Gonul should be the full-backs, adding to the numbers on both ends of the pitch. 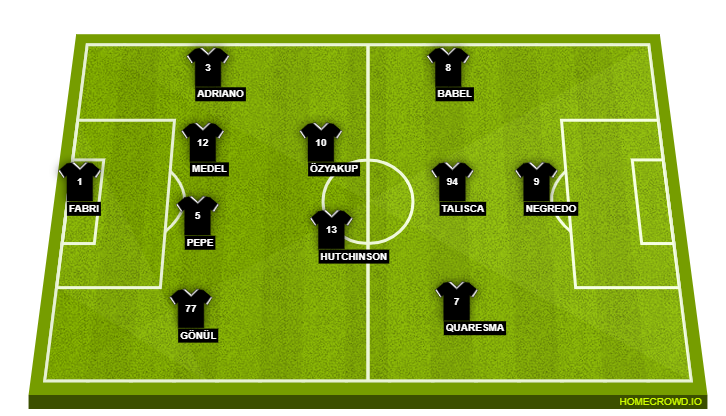 He was heavily linked with a move to some of the biggest clubs in the world in the summer, before he decided to stay put at Besiktas. Talisca, though, has showed just why the suitors were interested, having been a pivotal figure for the Turkish giants once again this season.

On Tuesday, everything Besiktas create is expected to go through the Brazilian, and if he sets up the plays well, the Super Lig side might just be able to spring a surprise. Talisca will need to be in his elements on the night, though.

Bayern Munich and Besiktas return to the Champions League, looking to get to the quarter-finals this time. In this Round of 16 tie, the Bavarians are heavy favourites to progress, thanks to the enormous gulf in class. To make matters worse for the visitors, several key players are well rested.

Bayern have practically been unstoppable in front of goal under Jupp Heynckes and a fresh Robert Lewandowski will be a menacing presence in the Besiktas box. The best the Turks can really do is get an away goal, although we predict the hosts to keep a clean sheet – possibly with a 3-0 win.