Barcelona will look to return to winning ways when they travel to the Ipurua Municipal Stadium to take on Eibar on Saturday.

La Liga action resumes this weekend with Matchday 24 of the campaign. At the Ipurua Municipal Stadium, high-flying Eibar will look to make another big stride this season, and produce a shock result in the process, when they play hosts to league leaders Barcelona on Saturday.

The hosts have been the surprise package in La Liga this season, with Europa League qualification a real possibility, with fifth-placed Villarreal just two points and a couple of places ahead of them. Jose Luis Mendilibar’s men have been in stupendous form of late, with just a solitary loss in their last ten games.

Barcelona, on the other hand, have been on another level altogether so far, with no team managing to get the better of them in league football this season. Ernesto Valverde’s men, though, have dropped points in each of their last two games which has seen their lead reduce to seven points – still a healthy gap on top.

The reverse fixture, played back in September at Camp Nou, saw Barcelona cruising to a 6-1 win, with Lionel Messi playing a starring role with four goals. Ahead of their latest meeting on Saturday, The Hard Tackle takes a closer look at the encounter.

Jose Luis Mendilibar has a few injury concerns to deal with ahead of the visit of Barcelona. On Saturday, the Eibar will be without four first-team players due to various fitness problems. The likes of Fran Rico (knee), Sergi Enrich (knee), Paulo Oliveira (hamstring) and Vukasin Jovanovic (knee) are the certain absentees.

Yoel Rodriguez (cruciate ligament injury) and Pedro Leon (knee) are available again after recovering from their respective long-term injuries. But, Mendilibar is only likely to ease the duo back into the scheme of things, although their return should spur the Basque side to even better things as the season wears on.

Meanwhile, the Eibar boss is likely to adopt high press style of play off the ball, in order to disrupt Barcelona’s build-up play, with captain Dani Garcia tasked with marshalling his troops from a deep lying role to nullify the visitors’ attack.

On the turnover, the hosts will aim to transition quickly by circulating the ball at pace, either via long balls or through simpler short passes. Takashi Inui and Fabian Orellana will be the key men in attack, providing a pacy outlet in the wide areas. 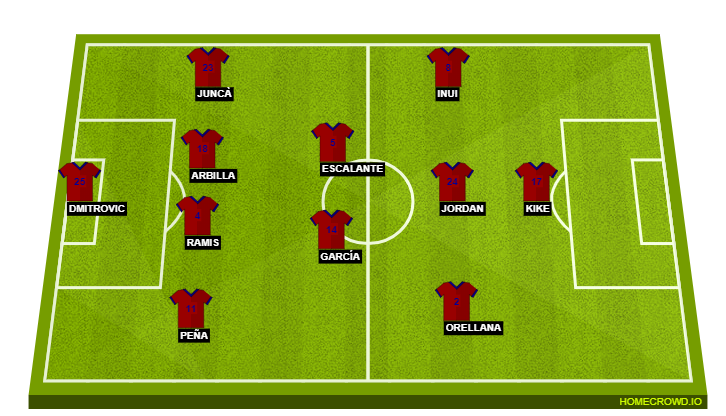 Ernesto Valverde, unlike Mendilibar, does not have any fresh injury concerns to deal with ahead of the trip to the Basque country. In fact, on Saturday, the Barcelona boss will have seen all his key first-team players get off the treatment table to make themselves available for the tie.

The last of the players who completed recoveries from their respective injuries are Thomas Vermaelen (hamstring) and Gerard Pique (knee), who missed out last weekend. Ousmane Dembele is available as well despite fears that he might miss out due to illness.

Samuel Umtiti is up for selection too, after serving a one-match suspension against Getafe last weekend. But, the Frenchman, as well as Pique, is likely to be rested once again this weekend, keeping one eye on the Champions League tie against Chelsea next week, which should see Yerry Mina start once again after an impressive debut last weekend.

Up ahead in midfield, Andres Iniesta might be rested as well, with Philippe Coutinho filling in in the captain’s stead. There could be a chance for Dembele as well, with Ivan Rakitic expected to start on the bench to be in the best possible shape for the Chelsea game.

But, the strike partnership of Lionel Messi and Luis Suarez is unlikely to be on the bench, with the goals possibly coming from the duo. Paco Alcacer, though, is an option if Valverde chooses to hand a night off to either of the players.

If Eibar are to take another big step in their shock bid for a place in Europe, they might have to make Barcelona a major scalp on Saturday. But, in order to do that, they will need to remain defensively solid to nullify the threat of the imposing Barcelona attack.

The responsibility to shore up the defensive side of the game would fall on skipper Dani Garcia, whose robust, no-nonsense style should come in handy in front of the back-four. He will look to marshall his troops and organise the high pressing line of defence, before circulating the ball quickly on the counter.

Two draws in a row have left Barcelona seven points ahead of Atletico Madrid, who have been in inspired form of late. Goals have often been hard to come by in recent games, with the Real Betis tie last month being an exception, and Lionel Messi and Luis Suarez will be aiming to set things straight on Saturday.

Against Eibar though, they haven’t had any such problems in La Liga, evidenced by the 6-1 scoreline in the reverse fixture. But, the hosts come into the game on the back of some fine form and will make things tough for Ernesto Valverde’s men. If the Barcelona boss indeed rests some key players, it might be a long night for the visitors, and we predict a score draw.