Real Madrid will look to shrug another winless result last weekend when they host Real Sociedad at Santiago Bernabeu on Saturday.

The La Liga title may be done and dusted for many, but there are still several interesting scenarios that could keep Spanish football fans fascinated. Real Madrid’s position in the table is interesting as well, and on Saturday, the defending champions will be looking to avoid another frustrating night when they host Real Sociedad at the Bernabeu.

Los Blancos’ poor domestic run has continued upon the turn of the year, with Zinedine Zidane’s men crashing out of the Copa del Rey at the quarter-final stage once again. Their fortunes in the league have only marginally improved, although a 2-2 draw last weekend deflated the players once again.

Real Sociedad haven’t been any better recently, with their inconsistent run of form dropping them to 14th on the La Liga table, although sixth-placed Sevilla are within touching distance. Their outing last weekend provides hope of a turnaround as they ended a four-game losing run with a 5-0 win over Deportivo.

The reverse fixture, back in September at the Anoeta, yielded a comfortable 3-1 win for Real Madrid, with Kevin Rodrigues going from hero to zero for Real Sociedad. Ahead of their latest meeting on Saturday, The Hard Tackle takes a closer look at the encounter.

Zinedine Zidane does not have many injury concerns to deal with ahead of the visit of Real Sociedad. On Saturday, the Real Madrid boss will be without just two first-team players, although he might make a few rotations with one eye on the crucial midweek Champions League tie against PSG.

One player is certain to miss Saturday’s game, with Jesus Vallejo struggling with a thigh injury. Dani Ceballos’ availability is doubtful, with the Spaniard recovering from a sprained ankle. If fit, he is likely to be involved in some capacity to rest either Toni Kroos or Luka Modric.

The likes of Isco, Marco Asensio and Theo Hernandez, though, are expected to receive a rare start, helping a few first-team regulars prepare for the PSG game. In midfield, Isco will take the creative burden, while Asensio will look to drive forward with purpose to create goalscoring opportunities.

The onus, though, will be on Cristiano Ronaldo to rediscover his best form ahead of the European fixture and link up well with Karim Benzema, a man under pressure. At the back, Keylor Navas, Sergio Ramos and Raphael Varane need to step up after letting in simple chances and goals in recent weeks.

Eusebio Sacristan has a number of injury concerns to deal with ahead of the trip to the capital. On Saturday, the Real Sociedad boss could be without as many as seven first-team players due to various fitness problems.

The likes of Willian Jose (unknown), Ruben Pardo (ankle), Carlos Martinez (shoulder), Adnan Januzaj (hamstring), David Zurutuza (thigh) and Diego Llorente (sprained ankle) will definitely miss the game. There are doubts over the availability of Imanol Agirretxe, but the striker is likely to shrug off a minor hamstring strain.

Agirretxe is expected to deputise for Willian Jose as the focal point of the Real Sociedad attack, with the Brazilian a big miss with his enormous presence inside the box. Zurutuza will also be sorely missed by the visitors, with the Spaniard an enabler in midfield to initiate swift counter-attacks.

In Zurutuza’s absence, Asier Illarramendi will take up the role, leaving the defensive screening position for Igor Zubeldia. Illarramendi, though, will be key alongside captain Xabi Prieto, while the link up of Alvaro Odriozola and Mikel Oyarzabal on the right flank will also be one to look out for. 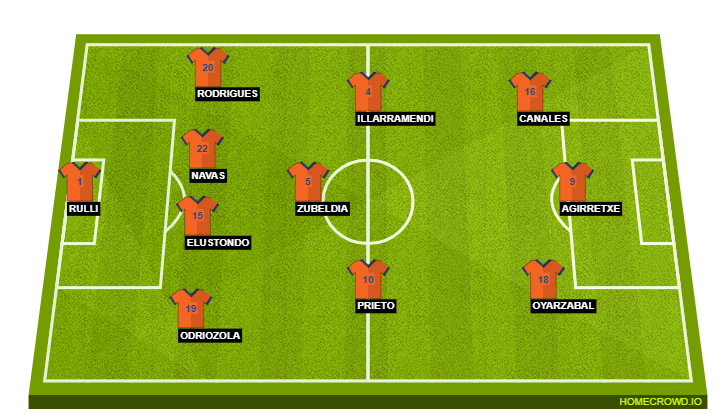 After a bright start to the season, things have gone haywire for Marco Asensio. He is no longer a regular starter, and if certain reports are to be believed, things could reach a head soon, paving the way for his departure from Real Madrid.

But, with Real Sociedad’s visit coming around the crucial PSG tie, Asensio could have an opportunity to impress. He could, thus, take this chance to show Zidane what he may be missing while also possibly solidifying a better standing in the squad. Lest he could be on his way in the summer.

For one reason or another, Real Madrid just can’t manage to string together a run of wins together. Just when the attack has started looking slightly menacing, the players at the back have failed to back them up.

Real Sociedad could, thus, be best placed to take something out of a Bernabeu trip for once. But, they have not managed to perform well against the best of sides this season, and a vulnerable defensive unit could be their undoing. We predict a keenly contested affair, with Real Madrid triumphing by the odd goal.