Manchester United will look to build on their win over Huddersfield last weekend when they visit St. James’ Park to face Newcastle United on Sunday

An age old rivalry is set to be renewed on Sunday, albeit in a completely different scenario than the two sides have been traditionally accustomed to. Newcastle United will be aiming to steer clear of the drop zone while producing a shock result at the same time when they welcome Manchester United to St. James’ Park.

The hosts have lost just one league game upon the turn of the year, although a string of stalemates mean that they are still looking over their shoulders as far as the threat of relegation is concerned. Heading into Gameweek 27, the Magpies are 16th on the table, just a point outside the drop zone.

Manchester United, on the other hand, have consolidated their place on the table, with nearest rivals Liverpool five points adrift on third. But, neighbours City are a massive 13 points ahead, meaning they just need to win every game, like against Huddersfield last weekend, to continue having a slim chance of a title win.

The reverse fixture, played back in November at Old Trafford, saw Manchester United cruise to a 4-1 win, with the returning Paul Pogba on song. Ahead of their latest meeting on Sunday, The Hard Tackle takes a closer look at the encounter.

Rafael Benitez does not have a lot of injury concerns to deal with ahead of the visit of Manchester United. On Sunday, the Newcastle boss will only be without as many as three first-team players, with two of those having slim chances of making the matchday squad.

The only player certain to miss out for Newcastle is Jesus Gamez, who is recovering from a long-term ankle injury. The major problem lies upfront, with Joselu (illness) and January signing Islam Slimani doubtful for the game, leaving Dwight Gayle as the only other option at Benitez’s disposal.

Slimani’s availability is “touch and go” after only returning to training on Wednesday, although it looks likely that the Algerian will be on the bench. Gayle though, is likely to spearhead the attack, with Ayoze Perez behind him. The Mexican will be a tricky customer for the Manchester United defence with his movement off the ball.

Kenedy is expected to start on the left flank once again, providing a pacy outlet out wide. Newcastle will pose their biggest threat from set-piece situation with Jonjo Shelvey’s pinpoint delivery, with Mohamed Diame and Jamaal Lascelles being aerial threats. 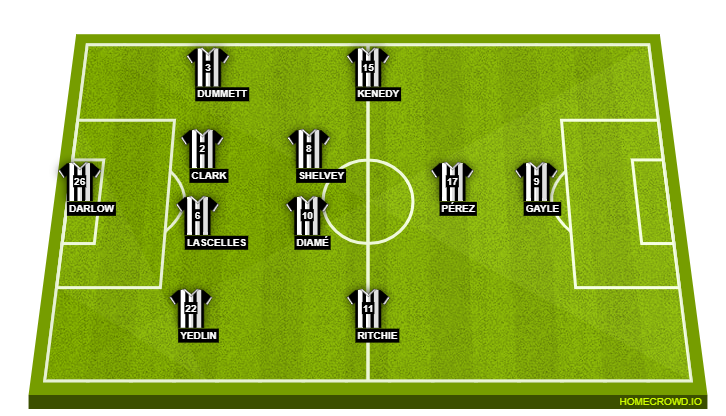 The fitness situation at Manchester United seems to be improving with each passing week, and there’s more good news before their trip to St. James’ Park. On Sunday, Jose Mourinho will be without just four first-team players.

Daley Blind (muscle injury), Marouane Fellaini (knee) and Eric Bailly (ankle) are sidelined with their respective injuries, although the latter should be back by the end of the month. Zlatan Ibrahimovic has resumed training this week after recovering from a hamstring injury, but the game has come too soon for him.

A few changes are in the offing from Mourinho, with Paul Pogba hoping for a recall after being dropped against Huddersfield. Phil Jones is also likely to return after missing last weekend’s match due to illness, and he will be hoping that the error-strewn Tottenham performance was only a one-off.

Pogba, meanwhile, will be the driving force of the Manchester United attack that could look to attack from the wings with pace, meaning there could be a recall for Anthony Martial, with Alexis Sanchez on the opposite flank.

Juan Mata shouldn’t be dropped though, after his fantastic performance last week. Instead, he is likely to be given a free role in the hole behind Romelu Lukaku, tasked with wreaking havoc with his constant movement and passes through the half spaces.

His career at Chelsea had plateaued completely, and Kenedy was in desperate need of some change to try and get back into the reckoning at Stamford Bridge. After an underwhelming loan spell at Watford last season, the latest at Newcastle offers him a chance to rediscover his best.

The Brazilian has kicked off the spell strongly, with his pacy outlet down the left flank being a breath of fresh air in what has been a timid Newcastle attack. He will need to produce an outing similar to last weekend if the Magpies hope to take anything away from the game. Otherwise, it’ll be yet another long afternoon at St. James’ Park.

This fixture has been an old school classic over the years, but all signs point towards this being a cruising win for Manchester United. Newcastle boast the worst home record in the Premier League this season, winning just three of their 13 games at St. James’ Park thus far, with only 11 goals scored in them.

The Magpies don’t come into the match in the best form either. Manchester United, on the other hand, have been strong in 2018, bar the disastrous night at Wembley last week. It, therefore, looks like Jose Mourinho will finally break his Premier League duck at St. James’ Park. We predict him to be 7th time lucky, with Manchester United cruising to a 3-0 win.