Manchester City will look to return to winning ways when they host Leicester City at the Etihad on Saturday, in what is expected to be a tense encounter.

Premier League action resumes this weekend, with several storylines being served by the league in the twenty seventh gameweek. On Saturday, table toppers Manchester City will be hoping to put the disappointing Burnley result behind them when they welcome Leicester City to the Etihad.

The hosts have only slightly dropped from their astonishing levels in recent weeks, although they still remain a cut above the rest. Pep Guardiola’s men though, have only managed to win three of their last six league games, the latest being a frustrating 1-1 draw at Burnley, when the Citizens were punished for their profligacy.

Leicester, on the other hand, have been going steady, and are now just a point off seventh-placed Burnley – a spot that could take them back to Europe, if cup results go their way. But, the Foxes would be looking to overturn a two-match winless run, though it comes in arguably the toughest game in England.

The reverse fixture, played back in November at the King Power, ended in a 2-0 win for Manchester City, with goals coming from Gabriel Jesus and Kevin De Bruyne. Ahead of their third meeting of the season, The Hard Tackle takes a closer look at the encounter.

The injury woes at Manchester City have gotten so far out of hand that Pep Guardiola had only six players to name for the bench last weekend. Ahead of Leicester’s visit on Saturday, the Citizens’ boss will be without as many as seven first-team players.

The players who are certain to miss out are Benjamin Mendy (ACL), Gabriel Jesus (MCL), Phil Foden (ankle), Fabian Delph (knee) and Leroy Sane (ankle), although the latter was seen with the main group, indicating that he may return earlier than the stipulated six-week layoff.

There are doubts over the availability of David Silva (abdomen) and John Stones (knee). In the latter’s case, Guardiola does not have any major concerns, with the arrival of Aymeric Laporte easing things up at the heart of the Manchester City defence.

The January arrival is likely to start on Saturday, and strike a central defensive partnership with Nicolas Otamendi. Laporte will be key to the hosts’ build-up play, as he showcased in his debut last week, with his ability to pick a pass immensely beneficial for Guardiola & co.

Danilo is likely to get the nod at left-back after a solid showing last weekend, with Kyle Walker starting on the opposite flank. The rest of the side picks itself, considering the injury crisis that Guardiola has on his hands.

As always, Manchester City will be looking to build the chances up patiently, looking to exploit the slightest of weaknesses between the half spaces, although they will need to be more clinical if they are to avoid repeating the frustrations of Turf oor

Claude Puel does not nearly have the kind of problems with fitness as his opposite number, but he is missing the services of his best player. Riyad Mahrez only returned to training on Thursday after going on a strike against the Foxes for blocking a late move to Manchester City in the January transfer window.

The Algerian has made himself available for Saturday’s game, but the Leicester manager has already confirmed that he will miss the trip to Manchester. Mahrez won’t be the only one available though, with Shinji Okazaki (knee) and Wes Morgan (hamstring) on the treatment table.

The Leicester captain’s absence has been ably filled by Aleksandar Dragovic, who should partner Harry Maguire at the heart of defence. Christian Fuchs and Danny Simpson should be the full-backs, with Wilfred Ndidi and Adrien Silva lining up in midfield.

Ndidi will be responsible for stopping the Manchester City onslaught down the middle, while Silva will look to recycle the ball quickly towards the wings to initiate counter-attacks. Residing on the flanks will be Marc Albrighton and Fousseni Diabate, who will look to counter with pace to catch the City high line unaware.

Upfront, Leicester have reverted to a strike partnership, where top scorer Jamie Vardy will link up with Kelechi Iheanacho, who will look to get one over his former side after departing last summer. 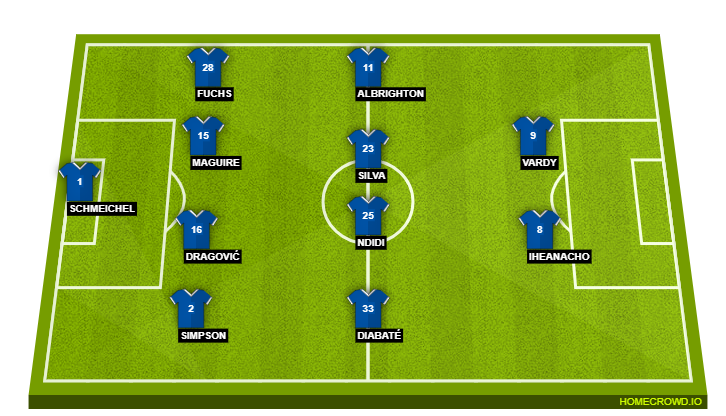 The Riyad Mahrez fiasco has been a bitter pill to swallow for Leicester, but the Algerian has also left a huge void to fill in attack. His position, in recent weeks, has been taken up by January signing Fousseni Diabate.

Recruited from the French second division, Diabate has looked lively, impressing over the last two weeks. He is likely to start on the right flank once again, and will need to be in his elements if Leicester are to pick anything from the game.

They may be the league leaders, but it has been anything but smooth sailing for Manchester City over the last few weeks. The injuries have been piling up and fatigue is starting to set in, as was starkly visible at Burnley last weekend.

Leicester, this weekend, will look to spring a surprise, also looking to exact revenge for unsettling their best player in the final days of the January window. But, their record against table toppers is abominable and it is unlikely to see them take anything out of this game. It might be close though but we are going with a 2-1 win for the hosts.