The penultimate stage of the Copa del Rey will come to a conclusion on Thursday with the second of the semi-final second leg ties. At the Mestalla, Valencia will be hoping to overcome a slender one-goal disadvantage and stop Barcelona from progressing to their fifth consecutive.

Los Che have seen their form plummet massively over the last one month, losing each of their last five games across all competitions. Marcelino’s men had also progressed to the semi-finals by the skin of their teeth after losing to Alaves in the second leg of their Last 8 tie.

Barcelona, on the other hand, have also been stuttering a bit over the last few weeks, having lost their first game of the season last month. They almost suffered their first defeat in La Liga over the weekend, before a late Gerard Pique goal saved their blushes against local rivals Espanyol.

The first leg, played at Camp Nou last week, saw Barcelona earn a narrow 1-0 win courtesy a second half strike from Luis Suarez. Ahead of the crucial second leg, The Hard Tackle takes a closer look at the encounter.

Marcelino does not have a lot of injury concerns ahead of the visit of Barcelona. On Thursday, the Valencia boss will be without just two first-team players, with Jeison Murillo (hernia) and Andreas Pereira (thigh) sidelined – the latter will only be able to return next month after sustaining his problem in the first leg.

But, the good news is that Goncalo Guedes is set to return to the matchday squad at the very least, having recovered from his own thigh injury. The Portuguese winger should line up on the left side of attack, with Carlos Soler on the opposite flank.

Between them, Valencia captain Dani Parejo should have Francis Coquelin for company, and the former Arsenal man has quickly become a key man for his new side. With Geoffrey Kondogbia struggling with fitness problems, the Frenchman will be vital to hold fort in the middle of the park and keep Andres Iniesta quiet.

Up front, Marcelino has to choose between Luciano Vietto and Simone Zaza to be Rodrigo’s strike partner, and the former is likely to get the nod, with the Italy international going through a lull. Neto should be a busy man in goal, with Barcelona expected to dominate proceedings once again. 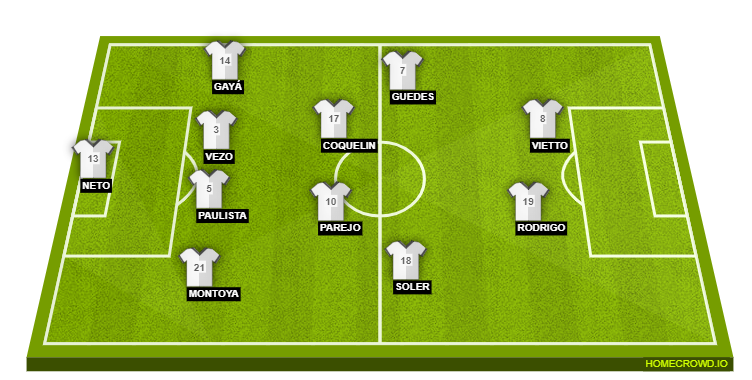 Ernesto Valverde has a few pressing fitness problems hampering his preparations for the crucial second leg trip to the Mestalla. On Thursday, the Barcelona boss could be without as many as four first-team players due to various injury issues.

The latest on the treatment table is Gerard Pique, who picked up a knee injury in the 1-1 draw against Espanyol last weekend. The Spain international will be on the sidelines for ten days, joining Thomas Vermaelen and Ousmane Dembele (both hamstring) on the injury list, with Lucas Digne (broken finger) doubtful.

In the absence of Vermaelen and Pique, Yerry Mina is likely to get the nod to make his Barcelona debut and partner Umtiti at the heart of defence. Flanking the duo should be Sergi Roberto and Jordi Alba, who was rested for the cup tie on the weekend.

Up ahead in midfield, Ivan Rakitic is expected to come back into the starting lineup to amp the creativity alongside Andres Iniesta, with Sergio Busquets keeping things tight in the holding role. Lionel Messi is also set to return after being rested in the derby, with Luis Suarez and Philippe Coutinho for company in the front trio.

He has had to bide his time upon joining Barcelona from Palmeiras last month, with Ernesto Valverde looking to give him time to settle in the city. But, the time has come for Yerry Mina to make a mark for the Blaugrana, with a Barcelona debut looking highly likely in such a crunch tie.

It is now up to the Colombian to strike a partnership with Samuel Umtiti at the heart of defence, and keep things tight for his side. If he manages to do so, the visitors will be well on their way to a fifth successive cup final.

Valencia have been nothing short of impressive so far this season, and despite a five-game losing run to boot, they have shown that they can pull their weight in the Copa del Rey. Last week’s first leg tie was evidence enough of the same as Barcelona only managed to assimilate a one-goal lead.

But, Lionel Messi has been in fine form since the turn of the year, with Luis Suarez not far behind in the goalscoring race either. The defensive frailties of both sides means that there should definitely be goals in this game. We predict a 1-1 draw, and Barcelona to seal progression to their fifth successive cup final.