Bundesliga action resumes this weekend, with Matchday 21. At Borussia-Park, the race for a top four place will intensify on Saturday, when seventh-placed Borussia Monchengladbach play hosts to fifth-placed RB Leipzig, with three points potentially elevating the winner into top four.

Hosts Gladbach have faltered over the last few weeks, with just two wins in their last six games dropping them down to seventh on the Bundesliga table. Dieter Hecking’s men now face a top four rivals for the second time in successive weeks following their 2-0 loss at Eintracht Frankfurt last weekend.

Leipzig, too, have been going through a poor patch of form over the last two months, with just the solitary win in their last eight games. With points coming at a premium, Ralph Hasenhuttl’s men have dropped out of the top four places, although they are only two points behind second-placed Bayer Leverkusen.

The reverse fixture, played back in September, ended in a keenly contested 2-2 draw as Dieter Hecking & co. twice came back from a goal down to level things up. Ahead of their latest meeting on Saturday, The Hard Tackle takes a closer look at the encounter.

Dieter Hecking has a number of injury concerns to deal with ahead of the visit of RB Leipzig. On Saturday, the Borussia Monchengladbach boss will be without as many as six first-team players due to various fitness problems.

The likes of Tobias Strobl (cruciate ligament), Laszlo Benes (broken foot) and Julio Villabla (hamstring) are long-term absentees, while Fabian Johnson (back) and Oscar Wendt (thigh) are unavailable too. Mamdoue Doucoure has returned to training after recovering from a thigh injury, but the game has come too soon for him.

Goalkeeper Yann Sommer, though, should be fit and available despite picking up a groin injury against Frankfurt. The onus, meanwhile, will be on the expressive and exciting attacking trio of Lars Stindl, Raffael and Thorgan Hazard, who will be tasked with creating the goalscoring chances and threaten a vulnerable Leipzig defence. 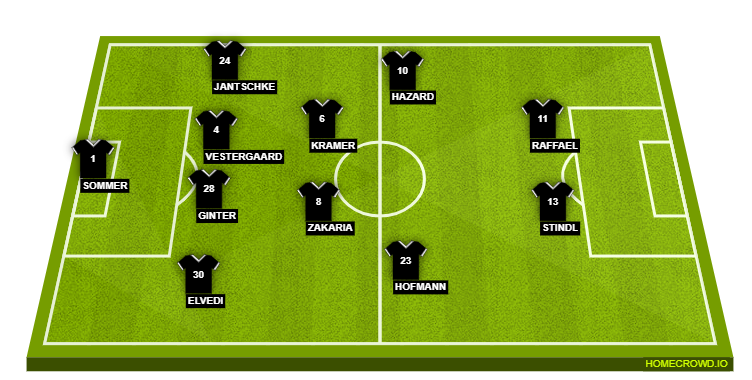 Ralph Hasenhuttl, unlike his counterpart, barely has any roster issues hampering his preparations for the trip to Monchengladbach. On Saturday, the Leipzig manager will be without just one player, with Marcel Halstenberg recovering from a long-term knee injury that will keep him out of action till next season.

Other than the German defender, Hasenhuttl has a full-strength squad at his disposal, and should name a strong starting lineup on Saturday. The biggest name returning to the side should be Naby Keita -whose immediate future has been resolved – after recovering from an adductor problem.

The likes of Emil Forsberg and Yussuf Poulsen should return as well, starting alongside Timo Werner in attack. At the back, Dayot Upamecano and Willi Orban will be crucial for the visitors as well, in charge of keeping things tight through the middle to keep the pacy Gladbach attackers at bay.

After a blistering campaign in the 2016-17 season, Naby Keita has been highly inconsistent this time around. With a move to Liverpool looming though, he will be a vital cog for Leipzig in his last six months at the Red Bull Arena, with the East German club looking to finish inside the top four once again.

On Saturday, the Guinean will be important for the visitors with his ability to link defence with attack, and his ability to find the back of the net will also be key in a match in which a moment of brilliance might just be the difference.

Two of the most exciting, yet inconsistent teams face off at Borussia-Park on Saturday, looking to earn three important points in order to get back into the top four. The level of attacking talent on display in Monchengladbach potentially sets up a mouthwatering encounter, when there shouldn’t be a shortage of goals.

But, considering a loss could create some headway between them and the rest of the top four rivals, both sides would be eager to give it their all to grab all three points. In the end though, there might just be nothing to separate the two sides, and The Hard Tackle predicts another 2-2 draw.