AC Milan and Lazio meet for the second time in four days, looking to get a step closer to the TIM Cup final when they face off at San Siro on Wednesday.

The Coppa Italia has entered its penultimate stage this week, with the first leg of the semi-finals. The second of the Last 4 ties sees AC Milan and Lazio renew their rivalry for the second time in four days when they meet at San Siro on Wednesday.

The Rossoneri have turned their form around over the last one month, going unbeaten in their last five games. This run also includes the 1-0 win over neighbours Inter in the quarter-final stage of the Coppa Italia, with the hosts yet to concede in the competition.

Lazio, too, are going through a fine run of form, with the 2-1 loss to AC Milan last weekend ending an eight-match unbeaten streak. The Biancocelesti have been one of the most free scoring side in the TIM Cup, scoring five times in their two games so far, beating Fiorentina by the odd goal to progress to the semi-finals.

Ahead of the crunch cup tie on Wednesday, The Hard Tackle takes a closer look at the encounter.

Gennaro Gattuso does not have any fresh injury concerns on his hands ahead of Wednesday’s cup tie. The AC Milan boss is without just two first-team players, with Andrea Conti the major absentee due to a long-term cruciate ligament injury.

There are doubts over the availability of star striker Nikola Kalinic, but the Croat should be fit enough to make the bench. Even if Kalinic is unable to start, Gattuso has talented youngster Patrick Cutrone in his ranks to step up, as he has been doing over the last few weeks.

The creative outlet would come from Hakan Calhanoglu, who will also look to test Thomas Strakosha with his dangerous free-kicks. Suso is likely to make the numbers in attack, testing the Lazio defence with pace and trickery.

The core of the Rossoneri side, though, will be formed in midfield, by Franck Kessie, Lucas Biglia, Giacamo Bonaventura. The trio will look to provide the steel at the centre of the park, protecting the back-line while also circulating the ball quickly to aid the attackers.

Simone Inzaghi does not have a lot of injury concerns hampering his preparations for the Coppa Italia semi-finals. While the Lazio boss is without two first-team players, star striker Ciro Immobile’s absence is the only pressing problem.

The Italy international is back in training after recovering from a hamstring injury, but is a major doubt for Wednesday’s game. If he continues to remain unavailable, either Nani or Felipe Caicedo is likely to be deputised as the focal point of attack.

The rest of the side pretty much selects itself, with Sergej Milinkovic-Savic and Senad Lulic almost certain starters due to the fact that they will miss the weekend’s Serie A clash against Genoa due to a one-match suspension.

The former, alongside Luis Alberto will be the key men in attack, especially if Immobile fails to be fit enough to start. But, Inzaghi will look towards his team to play as a unit across the field, just as they have been all through the season in order to get a big win on Wednesday. 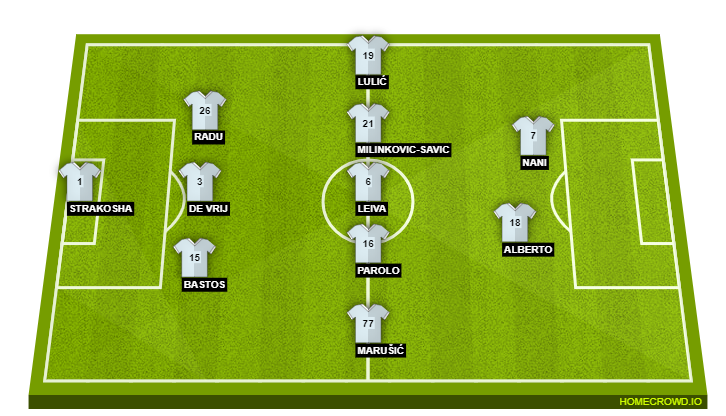 Bonucci left Juventus for AC Milan with hopes of playing his role in resurrecting a fallen giant of Italian football. But, the start to life in San Siro was extremely difficult for the Italian defender. Over the last few weeks though, things have been looking promising for both the Rossoneri and the player.

On Wednesday, with a free scoring Lazio side visiting, Bonucci’s role will be vital, as he will have to shore up the back-line and keep it organised in order to keep the visitors at bay. Time for the skipper to lead from the front.

The second Coppa Italia semi-final pits two of the most in-form sides in Italy at the present moment. Milan have stepped up considerably under the tutelage of Gennaro Gattuso, while Lazio have proven themselves to be quite versatile and strong under Simone Inzaghi.

The Serie A meeting between the two sides four days ago provided a glimpse into what we can come to expect on Wednesday. It should be fireworks and some more, and The Hard Tackle predicts a keenly contested score draw at San Siro.