Manchester City will look to seal their passage to the Carabao Cup final when they face Bristol City at Ashton Gate in the semi-final second leg on Tuesday.

The Carabao Cup finalists will be confirmed this week following the second legs of the two semi-finals. On Tuesday, the fate of the first semi-final will be sealed when Bristol City welcome Manchester City to Ashton Gate.

The hosts are the surprise package of this year’s tournament, having beaten four Premier League sides on their way to the semi-finals, with the most recent success coming over holders Manchester United. Manchester City, on the other hand, have stuttered their way to the Last Four, getting the better of Leicester City in the quarter-finals.

Bristol’s recent form though, hasn’t been great at all, with no wins in their last six games across all competitions, dropping down to 5th in Championship table. Pep Guardiola’s men suffered their first domestic defeat of the season recently, although they bounced back to form with a 3-1 win over Newcastle United.

The first leg, played two weeks ago, ended in a 2-1 win for Manchester City as Sergio Aguero struck deep into injury time to hand his side the advantage at Ashton Gate. Ahead of their latest meeting on Tuesday, The Hard Tackle takes a closer look at the encounter.

Lee Johnson is facing a bit of an injury crisis ahead of the visit of Manchester City, with as many five first-team players ruled out. Two more players – Nathan Baker (ankle) and Frank Fielding (groin) – are doubtful for Tuesday, with the Bristol boss sweating over their fitness.

The duo will face a late fitness test to determine their availability for the second leg. But, the likes of Gary O’Neil, Famara Diedhiou, Jens Hegeler (knee), Eros Pisano (hamstring) and Callum O’Dowda (ankle) are all long-term absentees and are certain to miss out on Tuesday.

The absentees aside, Johnson will focus on fighting fire with fire and attack with purpose, just as they did against Manchester United and in the first leg. At the same time, the back-four will be instructed to remain compact to kill off the half space that Kevin De Bruyne likes to exploit.

The midfielders will also be key for the Robins to stand a chance of grabbing a shock win as Marlon Pack and Korey Smith will need to stifle the visitors’ creative figures while also circulating the ball quickly for counterattacking opportunities. 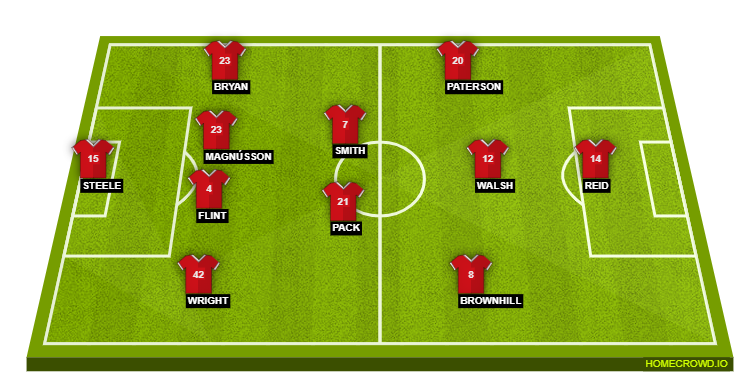 Like Johnson, Pep Guardiola has a number of injury concerns on his hands ahead of the trip to Ashton Gate. On Tuesday, the Manchester City boss will be without five first-team players due to various fitness problems.

Delph’s absence is the only major concern, which makes the left-back slot a problem area. In his absence, Oleksandr Zinchenko should get another opportunity to impress after making his first Premier League start of the season against Newcastle.

Guardiola also hinted that some other fringe players could get a chance, and the likes of Claudio Bravo, Eliaquim Mangala and Yaya Toure are expected to start. The man under the spotlight though, will be Kevin De Bruyne once again, with everything going through him.

Upfront, Sergio Aguero will have no opportunity to get some rest, and will need to have his scoring boots once again to guide the visitors to the finale date next month.

His goal may have just been a penalty, but Bobby Reid was quite the menace for the Manchester City defenders in the first leg as Bristol produced a spirited performance. On Tuesday though, the English striker will need to be clinical for the Robins to stand a chance of progressing to their first League Cup final.

The close result in the first leg has set up the return fixture at Ashton Gate nicely, and Bristol City would definitely fancy their chances against a Manchester City side that has shown some chinks in their armoury.

But, with Kevin De Bruyne and Sergio Aguero in such superb form, the Citizens have enough in their arsenal to come through unscathed on Tuesday, even if they produce a performance similar to the first leg. The Hard Tackle predicts another keenly contested affair, with Pep Guardiola & co. triumphing 2-1.