Premier League action resumes this weekend with Gameweek 24. In Saturday’s lunch-time kick-off, defending champions Chelsea will continue their quest for their first win of the year when Brighton & Hove Albion welcome them to the Amex Stadium.

The Seagulls have struggled to maintain a consistent run of form in recent weeks, which has dropped them to 16th on the league table, just three points outside the drop zone. Their 2-0 loss last weekend to West Bromwich Albion has thrown the relegation battle wide open.

Chelsea, on the other hand, have been struggling to find the back of the net on a consistent basis since the 5-0 thrashing of Stoke City last month. Over their last five games in all competitions, the Blues scored a mere three goals, failing to win any of those games.

The reverse fixture at Stamford Bridge, last month, ended in a comfortable 2-0 win for Chelsea, with Marcos Alonso and Alvaro Morata helping the Blues to all three points. Ahead of their latest meeting on Saturday, The Hard Tackle takes a closer look at the encounter.

Chris Hughton does not have a lot of injury concerns hampering his preparation for Saturday’s game, with just two first-team players on the treatment table. Izzy Brown (knee) and Steve Sidwell (back) are the only players sidelined, with no set return date for the two.

Meanwhile, the Brighton boss is likely to set his side up to defend with two blocks of four in order to deny Chelsea spaces down the middle. Special emphasis is likely to be placed on Eden Hazard, who should have two players marking him to restrict his impact.

On the other end of the pitch, Anthony Knockaert and Jose Izquierdo will look to attack with pace on the break, while also attempting crosses around the six-yard area for Glenn Murray, who will be key with his strength and finishing abilities.

Pascal Gross will be the schemer for the hosts, although he is in desperate need to rediscover the kind of form that had helped propel Brighton towards the top half of the table a few weeks ago. 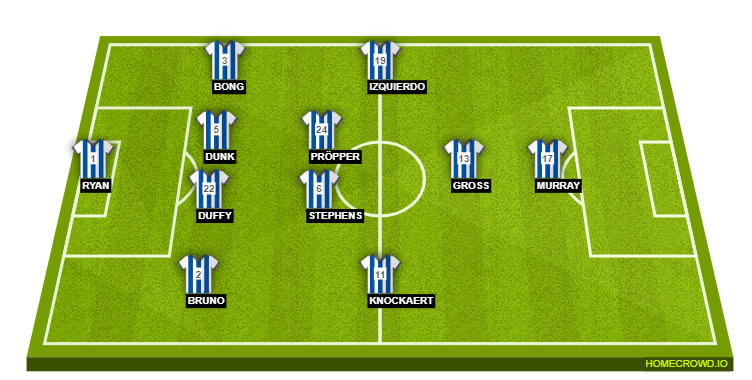 Antonio Conte has a number of roster issues to contend with ahead of the trip to the Amex Stadium. On Saturday, the Chelsea boss could be without as many as seven first-team players due to injuries or suspension.

The players who are set to miss the match are Gary Cahill and Cesc Fabregas (both hamstring) as well as Pedro and Alvaro Morata, with both the Spaniards serving a one-match ban after being sent off in the penalty shootout win over Norwich City in the midweek FA Cup tie.

The likes of Tiemoue Bakayoko, Danny Drinkwater and Ross Barkley are all doubtful, and Conte might have to take a late decision to pick N’Golo Kante’s partner in midfield. Regardless of his starting status, Barkley is in line to make his Chelsea debut on Saturday.

With so many key players unavailable, the Chelsea boss is down to his bare bones, leaving much of the starting lineup pretty much an automatic selection. At the back, Cesar Azpilicueta, Andreas Christensen and Antonio Rudiger should start in the back-three, while Eden Hazard and Willian will be alongside Michy Batshuayi in attack.

Barkley’s move to Chelsea was finally sealed earlier this month, although the midfielder has been working hard to build his fitness up for his eventual debut. Antonio Conte has, so far, hinted that Barkley is nearing his return to the field, and it may just happen on Saturday.

Likely to come off the bench, he could just be the game changer for the Blues, considering their struggles to muster up a lot of chances. Barkley would definitely like to kick off his Chelsea career by potentially proving to be a catalyst in the visitors’ first win of the year.

The 5-0 win over Stoke City was supposed to spur on Chelsea for better things in the new year, with the aim of sealing the second spot on the league table. Since then though, things have spiralled out of control for Antonio Conte & co. Brighton haven’t been a consistent side either, winning just one of their last 12.

But, the Seagulls’ home record is quite strong, losing just one of their last 10 in the Premier League at the Amex Stadium (W3 D6). Having said that, goals have been hard to come by for Chris Hughton’s men, and their fragile defence might just pave the way for Chelsea’s first win of 2018. The Hard Tackle predicts a 1-0 win for the Blues.