Manchester United will be aiming to further narrow the advantage on neighbours and league leaders Manchester City when Burnley welcome them to Turf Moor on Saturday in a Gameweek 23 clash, when the Clarets would be looking to go one better than the reverse fixture at Old Trafford last month.

Burnley have seen their early season form peter out considerably in recent weeks, with Sean Dyche’s men failing to win any of their last six Premier League games. The slump in form hasn’t shown in their standing on the Premier League table though, with the Clarets still seventh, just five points behind Arsenal, who are closest to them.

Manchester United, on the other hand, have kicked off 2018 with a bang, winning each of their Premier League fixtures in convincing fashion. The fantastic recent form has also helped them close the gap on Manchester City, although they still remain 12 points off the pace from their bitter rivals.

The reverse fixture at Old Trafford in December 2017 ended in an exciting 2-2 draw, with Manchester United spared the blushes through Jesse Lingard’s brace as they fought back from two goals down. Ahead of their latest meeting on Saturday, The Hard Tackle takes a closer look at the encounter.

The results on the pitch have hardly been ideal for Sean Dyche & co. and the problems have compounded due to a worsening injury crisis that has left the Burnley boss with a severely depleted squad. On Saturday, the Clarets could be without as many as seven first-team players.

The likes of Jonathan Walters (knee), Chris Wood (MCL), Stephen Ward (knee), Robbie Brady (knee) and Tom Heaton (shoulder) will definitely miss the visit of Manchester United. Charlie Taylor (rib) and Scott Arfield (hamstring) are slight doubts, although the duo might be involved in some capacity.

The major news this week has surrounded club captain Heaton, who has resumed training and should be available for selection at the onset of February. For the time being though, Nick Pope, who has done a commendable job in Heaton’s absence, should continue deputising in goal.

The focus on Saturday, meanwhile, will be to defend in numbers, with two blocks of four in front of the goalkeeper, remaining compact to force Manchester United wide. On the other end of the pitch, Steven Defour and Johann Berg Gudmundsson will pose a lot of danger with their abilities in set-piece situation. 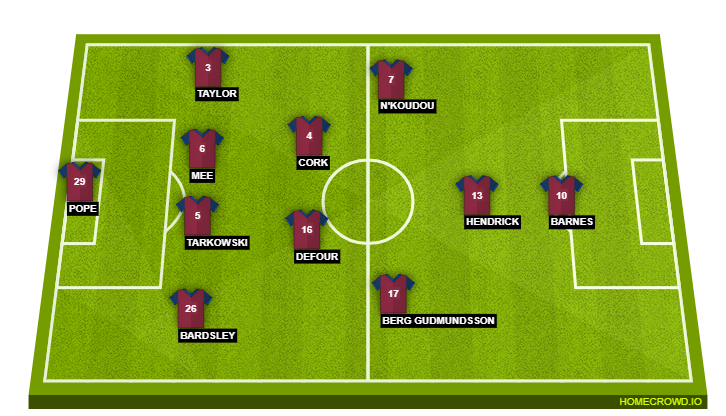 Unlike his counterpart, Jose Mourinho has seen his injury problems almost completely ease up over the last few weeks. The Manchester United boss has no fresh concerns ahead of the trip to Turf Moor, and will be without just two first-team players on Saturday.

Zlatan Ibrahimovic (hamstring) and Eric Bailly (ankle) are the only players who will miss the game against Burnley due to an injury. Ashley Young, though, is set to return to the matchday squad after serving the final of his three-match suspension in the game against Stoke earlier this week.

A certain Alexis Sanchez could also feature for the visitors on Saturday, provided his reported move to Manchester United is completed before the noon deadline on Friday. Should he be unavailable, Anthony Martial, Jesse Lingard and Juan Mata should line up as the attacking trio behind Romelu Lukaku.

In defence, Ashley Young could be the only change to replace Luke Shaw, who hasn’t missed a single game in the last three weeks. The central defensive partnership of Phil Jones and Chris Smalling will be key to Manchester United keeping another clean sheet, with the visitors likely to bombarded with a barrage of crosses.

The onus, meanwhile, will again be on Paul Pogba to be the schemer for the Red Devils, dictating the tempo of the game while linking up with the quartet ahead of him. The role of Nemanja Matic will again be key, with the Serb tasked with keeping the dangerous duo of Defour and Gudmundsson quiet.

Nick Pope, and Tom Heaton before him, may have grabbed the bulk of the headlines due to their exploits between the sticks, but Burnley have had other, silent guardians that have enabled them to remain so consistent and eke out narrow, positive results.

One such guardian is Jack Cork, the midfield general for the Clarets, who has kept things organised in the middle to ensure the his side remains defensively solid throughout 90 minutes. On Saturday, some more hard work beckons for the midfielder, if Burnley are to ensure another result to remember this season.

The 2-2 draw last month was a bitter pill to swallow for Manchester United, who have picked their form up since then. Burnley, on the other hand, are struggling to maintain a consistent run of form, especially in recent big games.

The aforementioned teams against the bigger sides have also exposed somewhat of a chink in a usually air-tight defence, with sides attacking them with pace and precision. With Jesse Lingard and Anthony Martial in tow and in form, Manchester United should be comfortable on Saturday. The Hard Tackle predicts a 2-0 win for Jose Mourinho & co.