Gameweek 23 of the Premier League comes to a close with Monday night football at Old Trafford. Manchester United will be aiming to capitalise on dropped points by some of their rivals when they welcome manager-less Stoke City to the Theatre of Dreams.

The hosts seem to have put a torrid December well behind them, having kicked off 2018 with two wins in two. Manchester United’s last Premier League result was a 2-0 success at Everton, and another win on Monday could help them create a three-point lead in third.

Stoke City, on the other hand, have been horrendous over the last one month, with just one win in their last seven league games. The poor run of results has left them in the relegation zone, and the shock FA Cup loss to Coventry City ended up costing Mark Hughes his post as the manager.

The reverse fixture, earlier in the campaign, was a fiercely contested affair that ended all square – a 2-2 draw. Ahead of the latest meeting between the two sides on Monday, The Hard Tackle takes a closer look at the encounter.

The injury woes are easing up for Jose Mourinho ahead of the visit of Stoke City, with Antonio Valencia fit and available. On Monday, the Manchester United boss will only be without three first-team players, two of whom are on the road to recovery.

Michael Carrick (heart) trained with his teammates during the three-day camp in Dubai. Eric Bailly (ankle), too, has made some progress in his rehabilitation, having resumed light running. But, Zlatan Ibrahimovic will be unavailable, at least for the rest of the month, due to a hamstring injury.

With nearly all of first-choice players available, a full strength Manchester United side is expected to start on Monday. The major tactical decision should surround a change in formation, with Mourinho expected to revert to a midfield pivot instead of a trio, especially with Romelu Lukaku back.

Juan Mata, one of the more understated presence in Mourinho’s side, will line up on the right side of the attack, looking to create overloads in midfield when off the ball and probing with his movement and vision when Manchester United have the possession.

The in-form Jesse Lingard will again be key, looking to link up through the middle with Paul Pogba as well as Romelu Lukaku upfront. A well rested Nemanja Matic may also ensure total domination in midfield for the hosts.

Mark Hughes has been relieved of his duties at Stoke City, who are manager-less heading into Monday’s game at Old Trafford. The Potters will be managed by Eddie Niedzwiecki against Manchester United, and the caretaker boss has a number of major injury concerns.

Defence is the sole area of concern for the visitors, with Erik Pieters (hamstring), Glen Johnson (knee), Bruno Martins Indi (groin) and captain Ryan Shawcross (calf) sidelined due to their respective injuries.

In the absence of so many key personnel, Niedzwiecki is expected to have a traditional four-man back-line instead of a back-three that Mark Hughes used for majority of the campaign. In Johnson’s absence, there may be a debut for new signing Moritz Bauer, who has arrived from Rubin Kazan.

Stoke are unlikely to sit back though, with the pace of Eric Maxim Choupo-Moting and Xherdan Shaqiri providing a dangerous outlet. Ramadan Sobhi could be an additional option to bring an element of pace and trickery. 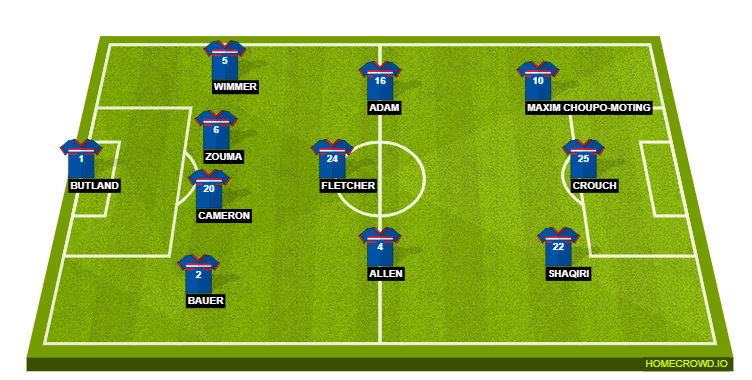 Butland once had the world at his feet, on the cusp of becoming the England number one, and with several top clubs aiming to sign him. But, this season has been nothing short of a horror story for him, just as much as it has been for his side.

The shot stopper has looked extremely uncertain in his positioning at times, while also being prone to an odd error. On Monday, he will need to rediscover his best form in order to thwart a Manchester United looking to create some sort of distance between them and the other top four hopefuls.

It is often seen that manager-less sides find a way to forget all their miseries and spring up a surprise. But, that seems to be an unlikely prospect for Monday. Stoke City are in complete disarray at the moment, with defence lacking in confidence and attacking having very little bite.

Manchester United, on the other hand, are just starting to find their form once again and should have a merry night against the Potters. Expect Jesse Lingard to turn on the style once again, with Jose Mourinho & co. to prevail by at least three goals.