Barcelona will aim to consolidate their place atop the La Liga table when they travel to Anoeta to take on Real Sociedad on Sunday.

Real Madrid’s damning loss to Villarreal on Saturday has given Barcelona even more impetus in the La Liga title race. On Sunday, the league leaders will look to create an unbelievable 19-point lead over their bitter rivals when they face Real Sociedad at Anoeta.

Real Sociedad have struggled to repeat the heroics of last season – when they finished sixth on the table – this time around. With just six wins and 23 points from 18 games thus far, La Real’s inconsistencies have put them at 13th on the table, although they are just six points adrift of fifth-placed Sevilla.

Barcelona, on the other hand, just can’t be toppled this season, barely giving an inch in any competition this season. In La Liga, Ernesto Valverde’s men are on the summit of the table, 11 points ahead of second-placed Atletico Madrid heading into the weekend’s round of fixtures.

The corresponding fixture last season ended in a 1-1 draw as Lionel Messi levelled things up after Willian Jose had put the hosts ahead. Ahead of their latest meeting on Sunday, The Hard Tackle takes a closer look at the encounter.

Eusebio Sacristan has a few injury concerns to contend with ahead of the visit of Barcelona. On Saturday, the Real Sociedad boss could be without as many as six first-team players due to various injuries.

Ruben Pardo (ankle) and Inigo Martinez (calf) are on the treatment table. Carlos Martinez (ACL) and Imanol Agirretxe (thigh) have returned to training, but the game has come too soon for them. Adnan Januzaj (hamstring) and Geronimo Rulli (ankle) are doubtful, but should be available pending a late fitness test.

Meanwhile, Eusebio Sacristan should employ tactics that are similar to the ones that Barcelona usually use, focusing on possession-based football that starts from the back end of the pitch. Rulli, who is adept at playing short balls and is a fantastic distributor of the ball, will focus on maintaining possession.

Alvaro Odriozola and Kevin Rodrigues will be tasked with the job of bombing forward with pace while also keeping a check on their man in the initial third. The key man to ensure La Real’s success though, will be Asier Illarramendi, who will not just look to stop the Barcelona attack in their tracks but also keep the ball circulating effectively.

Alongside him, David Zurutuza and captain Xabi Prieto will be the enablers, while Sergio Canales and Mikel Oyarzabal will look to drift inwards and create overloads around the box, something that Rodrigues and Odriozola will look to take advantage of with low, powerful crosses. 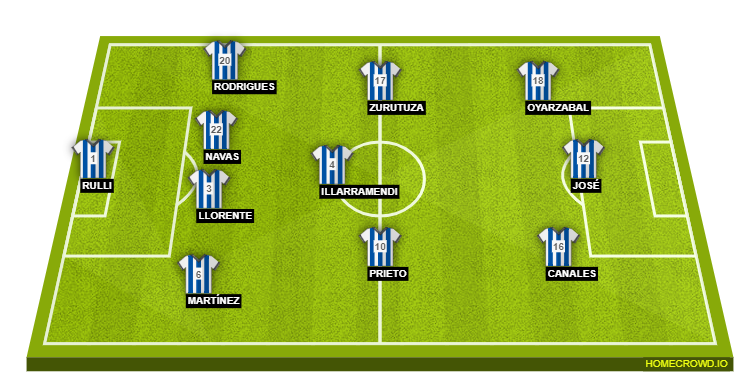 Unlike Eusebio Sacristan, Ernesto Valverde does not have many injury concerns hampering his preparation, ahead of what is likely to be another tricky trip to Anoeta. On Saturday, the Barcelona boss has just three players on the treatment table.

Samuel Umtiti (hamstring) and Paco Alcacer (muscle) are closing in on their return, while new signing Philippe Coutinho will have to wait for a couple of weeks before making his debut. Rafinha and Gerard Deulofeu have returned to training after recovering from their injuries, but the game has come too soon for them.

The spotlight on Sunday though, will be on Ousmane Dembele, who has completed his recovery from a hamstring injury and is set to start on Sunday on the right wing once again. With his Barcelona bow curtailed for a bit, the Frenchman will be eager to kickstart his stint at Camp Nou with a significant performance.

Also set to start, is Sergio Busquets, who served his one-match ban last weekend. The Spaniard should have the energetic and burly Paulinho for company, with captain Andres Iniesta providing the creative impetus to set up Luis Suarez and Lionel Messi, who will be sharing the creative burden himself.

At the back, Thomas Vermaelen should partner Gerard Pique at the heart of defence yet again, with Yerry Mina only managing to train in one session since joining Barcelona. Nelson Semedo and Jordi Alba should be the full-backs.

One of the gems of the latest generation of Spanish footballers, Odriozola has progressed leaps and bounds since breaking into the first-team setup at Anoeta last season. In just over a year’s time, the youngster has made his Spain debut, and is also being touted for a place in the country’s World Cup squad.

Another positive outing on Sunday will go a long way in enhancing his reputation further and take one more step towards a place in the squad. His task won’t be easy though, with Andres Iniesta and Jordi Alba to contend with, although the confident youngster will likely take it in his stride.

Barcelona return to Anoeta, one of the few places that hasn’t been a happy hunting ground for them over the last decade or so. The Catalans have not managed a league win at San Sebastian since 2007, and it goes without saying that Sunday’s encounter will be one of the trickier games of the season for Ernesto Valverde & co.

But, La Real have only won one of their last seven La Liga games (D3 L3), failing to score in three of their last four, and this could just be the year when the Anoeta curse ends. Barcelona’s careful dissection of Celta Vigo in the midweek cup tie also suggests that they are starting to get into their elements, which is why we predict a 2-1 win for the visitors.