Chelsea and Arsenal will look to take a significant step towards their first trophy of the season when they face off at Stamford Bridge on Wednesday.

The first chapter of the Carabao Cup semi-finals will draw to a close on Wednesday at Stamford Bridge. Chelsea and Arsenal will meet each other for the second time this month, looking to quickly move on from their respective disappointing results in the FA Cup, and get a step closer to the final.

Chelsea are coming into this match on the back of a drab goalless draw against Norwich City, with the replay set to be played in a week’s time. Arsenal don’t get such luxury, after their FA Cup defence ended in a whimper when Nottingham Forest handed a humbling 4-2 loss to them on Sunday.

The Carabao Cup, thus represents the only opportunity for the Gunners to win a domestic trophy this season, and they will be looking to win their second successive London derby in the competition after beating West Ham last time around. Chelsea, on the other hand, progressed to the semis courtesy a 2-1 win over Bournemouth.

The two meetings between the two rivals have ended all square, with the most recent derby ending in a 2-2 draw as Hector Bellerin struck deep into injury time. Ahead of their latest meeting, The Hard Tackle takes a closer look at the encounter.

Antonio Conte has absolutely no injury concerns to deal with ahead of the visit of Arsenal. The Chelsea boss is only without Ross Barkley, who is still training his way towards peak fitness after recovering from a long-term hamstring injury.

The Englishman, who joined Chelsea a few days ago from Everton, has had his first training sessions at Cobham, and should be available soon. In some better news for Conte, Eden Hazard has shrugged off a minor calf injury to be available for Wednesday’s cup tie.

The Belgian is expected to start in what could be a slight shuffle from the 3-5-2 formation that Conte used in the previous game against Arsenal. This time around, the Chelsea boss could dish out a 3-4-3 formation and test a vulnerable Arsenal defence with pace and directness.

Pedro could, thus, retain his place in the starting lineup. In midfield, Cesc Fabregas is likely to be favoured ahead of Timeoue Bakayoko to provide the creative edge, with N’Golo Kante holding the fort in front of the back-three.

Speaking of the back-three, regular faces Andreas Christensen and Cesar Azpilicueta should return to a strong starting lineup after being rested for the game against Norwich. So should Thibaut Courtois, who will look to reproduce his exploits from last week.

Unlike Conte, Arsene Wenger has a number of injury concerns to deal with ahead of the short-trip to West London. On Wednesday, the Arsenal boss could be without as many as seven first-team players, with Shkodran Mustafi (knock) and Granit Xhaka (groin) the latest on an ever-growing injury list.

The duo are doubtful for Wednesday’s cup tie, and they face a late fitness test to determine their availability for the game. But, the likes of Olivier Giroud, Nacho Monreal, Sead Kolasinac, Aaron Ramsey and Santi Cazorla are certain absentees, piling the woes for Wenger.

Meanwhile, Wenger is likely to name a strong side for the first time in a cup game this season as he can ill afford another defeat in what is starting to become another underwhelming season, while also considering the stature of the opponent on Wednesday.

The onus, for the visitors, will be on Alexis Sanchez to continue his fantastic goalscoring form while also needing Alexandre Lacazette to come to the party and end his goalscoring drought. Mesut Ozil and Jack Wilshere will have the creative responsibility. 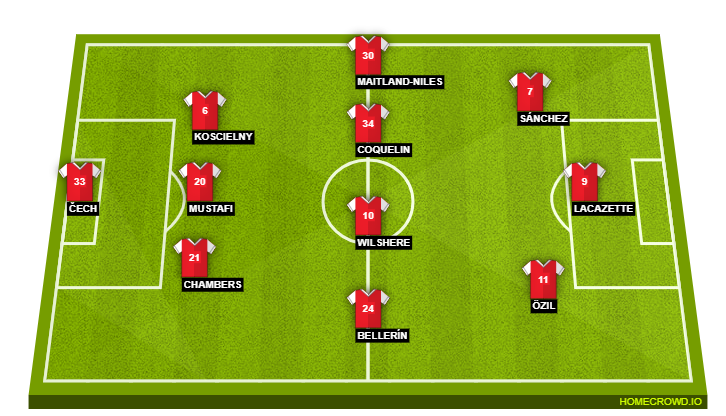 A terrific start to life in England has sort of petered out, with several frustrating outings in the last few weeks. The game against Arsenal last was arguably his worst in a Chelsea shirt as the Spaniard failed to convert from a number of opportunities, with the match eventually ending all square.

His problems in one-on-one situations have been worsening with each passing game, and a similar failure on Wednesday could be disastrous, with cup ties of such magnitude often hinging on the slimmest of margins. Morata needs to address his problems and quickly.

The two previous games featuring these two sides this season have been among the best in England this season, and Wednesday should be more of the same. Both Chelsea and Arsenal will be looking for a reaction from their disappointing FA Cup results, and the game should be a cracking contest.

But, Arsenal’s defensive frailties have become progressively worse as the season has worn on, and that is likely to ultimately be the deciding factor on Wednesday, which is why, The Hard Tackle predicts a 2-1 win for Antonio Conte & co.